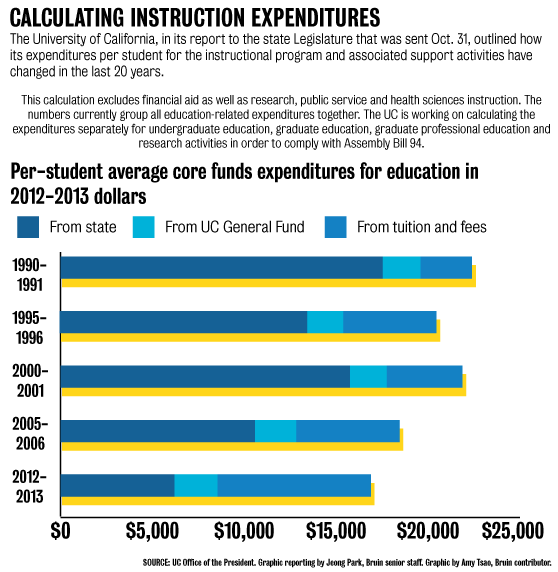 University of California students continue to pay more of the cost of their individual education, as the amount the University spends per student continues to slide while tuition and fees rise.

The state’s per-student contribution to education declined by almost half over the past two decades – from covering around 80 percent of the cost of students’ education to 40 percent.

During the same time, the average student tuition and fees for undergraduate, graduate and professional student educations fluctuated from $2,810 to $8,360, according to a recent expenditures report by the UC sent to the state legislature. The average amount the UC said was spent per student in the 2012-2013 academic year was $16,890, compared to $22,390 for the 1990-1991 academic year.

“It has been the long-term trend. Since 1990, the state’s expenditure has declined … We have made it up some in student fees and tuition, but overall spending per student has gone down,” said Nathan Brostrom, the UC’s chief financial officer. “Who pays has changed quite a bit.”

But some experts take issue with how the UC accounts for where the money actually goes.

“They have a particular way, they bundle everything together, divide that by the number of students and call that the cost of undergraduate education,” said Charles Schwartz, a retired UC Berkeley professor who’s studied the University’s finances for two decades. “It’s a very dishonest bookkeeping habit.”

The report comes at a time that the UC is considering a plan that could raise tuition by up to 5 percent each year for the next five years, saying that declining state funding and increasing costs make such a plan necessary.

Schwartz said he thinks the UC’s way of calculating its expenditures is misleading because officials bundle together all expenses, including faculty salaries, staff salaries and research costs, then divide the total by the number of all students to calculate the “cost of education.”

But in the UC’s recent report, which came out a month late after officials asked for an extension from the Oct. 1 deadline, the UC did not follow the specific guidelines under the law. Numbers showing the UC’s education expenditures were still in aggregate totals, rather than broken into the four categories requested.

“Initially, the University considered using (the) methodology in … AB 94, but this is not possible because of the way UC’s data is collected,” the report stated.

The UC’s way of accounting for costs is the norm in higher education, with most other institutions like Harvard University using the same method, Schwartz said.

The problem is that the state, the UC and various experts all disagree on how to define the cost of an undergraduate education.

Schwartz said according to his years of research, he believes the real “cost of education” is almost half the number the UC calculated and that his conclusions consistently differ from what the UC has reported.

“If you compare student fees to their number, they say students are paying half the actual cost (of education), if you compare them to mine they’re paying twice the cost,” he said. “So there’s some remarkably different conclusions there.”

The state used to base their per-student funding on a rate called the “marginal cost of instruction,” but stopped several years ago when the state and the UC couldn’t agree on the methodology, said Bob Samuels, president of University Council-American Federation of Teachers, which represents non-Academic Senate faculty and librarians at the UC.

“I hope that AB 94 will motivate the University to come up with a better accounting mechanism,” Samuels said. “I do understand the complexity, but my point is the (UC) cannot make any decisions about anything if they don’t know the real cost. … How can they decide on any of their priorities if they don’t know about the cost?”

Brostrom said the University is currently working on how to comply with the law, but distinguishing precisely where money is spent can be difficult. He added that the process is intrinsically subjective because it’s hard to determine what contributes to the value of an education.

“It’s still a blended number, so we have to do more refined differences between undergraduates and graduate students,” Brostrom said. “It’s hard to determine what’s called education and what’s research, recognizing that at some level it’s going to include subjectivity, especially between disciplines. So trying to get to an (objective) perspective is somewhat misleading.”

Samuels said he understands the intricacies that go into the accounting process, but thinks the first step is to agree on a way to calculate them.

“We need to ask who should be paying for the other missions (besides education) of the University,” Samuels said.

The regents will meet Wednesday to vote on the tuition policy in San Francisco.