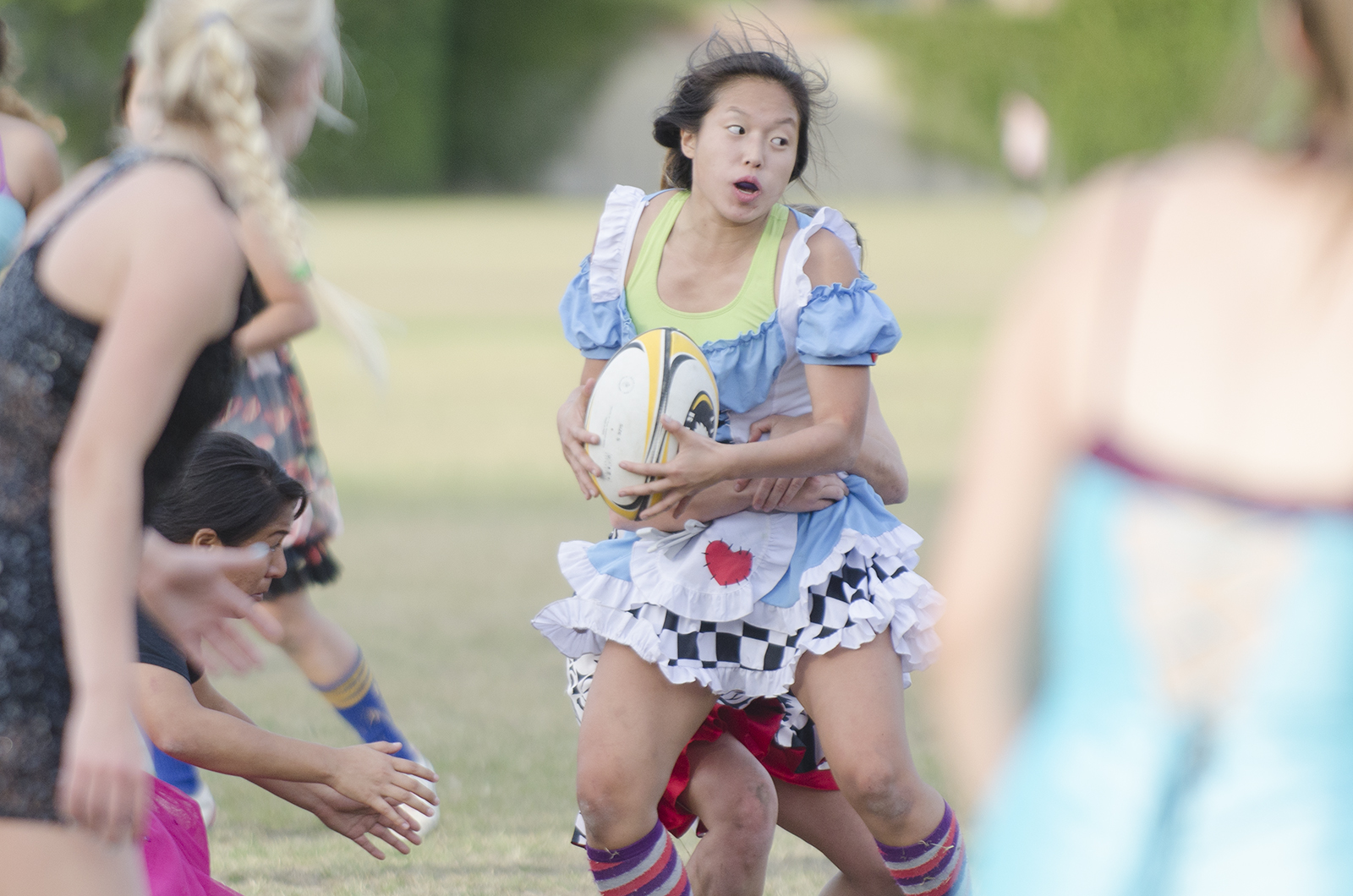 The average girl does not accessorize her prom dress with a mouthpiece.

But members of the women’s club rugby team did just that on Monday, sporting flamboyant gowns as they participated in the club’s seventh annual Prom Dress Rugby game, an intra-squad challenge designed to promote the team and the sport.

“It gets the people’s attention,” said publicity chair and third-year geography student Brenda Herrera. “I know when I was walking one of my teammates down from the apartments, I had people ask, ‘Oh, what’s going on, what’s rugby?’”

Second-year nursing student Emily Hipp said the event also helps bring the team closer as it prepares for the regular season in January.

“A lot of us out here are rookies or second-years, so a lot of us are coming together, getting to know people,” Hipp said. “It’s interesting, the dresses make there be a lot less pressure.”

The players were still competitive, though, according to club president and third-year civil engineering student Andrea Umali.

“This year was a lot more intense than last year even though we have a lot of new rookies,” Umali said. “We were going at it, no mercy on the field.”

The game was a condensed version of rugby, with fewer players, a smaller field and a few elements – such as rucking and scrumming – missing from the action.

The game was somewhat of a free-for-all, as players did not separate into forwards and backs as they typically would.

“We also let a lot go, we didn’t have an official ref, so it was a lot more continuous play,” Umali said.

Of course, the attire also changed the game.

“I was out there wondering why it hurt so much more getting tackled,” Hipp said. “It’s because we don’t have sleeves. And it’s a lot harder to tackle because everyone’s really slippery.”

“It’s kind of a masculine sport but we’re out here in prom dresses trying to show that girls can play too,” Hipp said. “A lot of people shy away from rugby because they think it’s too tough or they think ‘Oh, that’s a guy sport.’ But it’s really fun, anyone can play.”

Herrera confirmed that she was initially intimidated by the sport’s aggression.

“I heard about it my first year but I was kind of scared of it because I was one of those people that was like ‘I don’t know what rugby is, I’ve never played rugby before,’” Herrera said. “I went out to watch one of the practices and I was like ‘Oh, that’s kinda tough, I don’t know if it’s for me.’ But I decided to give it a shot my second year and I fell in love with it.”

Most of the girls bought their dresses from Goodwill Sunday, a wise decision considering the wear and tear placed upon them throughout the game. Umali laughed as she explained that the zipper on her $7.50 dress broke and the shirt underneath was completely ripped.

“Practice tonight is going to be hilarious,” Umali said after the game. “We’re all just going to be cracking up about what happened today.”