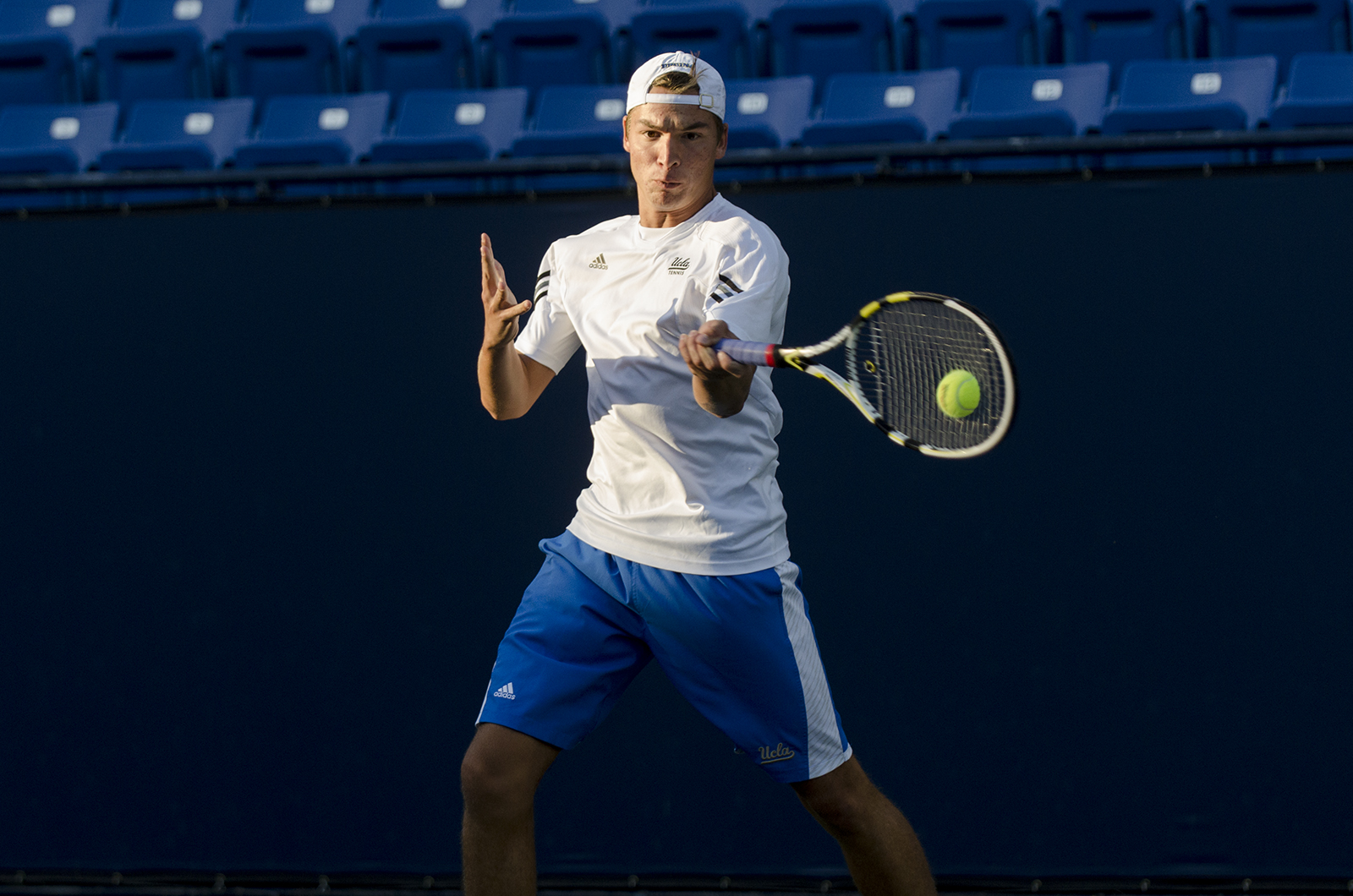 Freshman Martin Redlicki (pictured) and his partner sophomore Mackenzie McDonald qualified for an invitation to be one of 20 doubles teams at the USTA/ITA National Indoor Intercollegiate Championships in Flushing, N.Y., this week. (Heidy Cadena/Daily Bruin)

For Dennis Mkrtchian, this weekend’s victory at the Southern California Intercollegiate Championships represented an important step in his road back from an elbow injury.

After a low-intensity summer, the senior returned to action at the end of September and was met with a quick dose of frustration at the ITA Men’s All-American Championships. In the qualifying round against Ohio State’s Ralf Steinbach, Mkrtchian squandered two match points before losing the second set on a 20-point tiebreaker and subsequently dropping the third set.

“I realized the No. 1 thing I have to get back is my mental toughness,” Mkrtchian said.

Midway through the second set of Sunday’s final against sophomore Gage Brymer, his teammate, the match began to resemble the one from a month earlier, against Steinbach. Mkrtchian, who won the first set, had just broken serve against Brymer to take a 5-3 lead.

A loss seemed imminent for Brymer, who had struggled just to return Mkrtchian’s powerful serve all day. But after Mkrtchian took a quick 30-0 lead, Brymer battled back to break Mkrtchian’s serve for the first time all match.

Unlike against Steinbach, however, Mkrtchian did not let the swing in momentum cost him the match, winning the second set 7-5 to claim the tournament title.

“You know, I served for it, had match points and lost that game but recommitted myself and won the second set,” Mkrtchian said. “I still feel I can get a little mentally tougher, but I held up pretty well.”

“I’m always a little nervous,” Martin said. “Because as competitive as these guys are, I’ve unfortunately had some circumstances in the past where it gets really heated, and that sometimes can really be a bad thing.”

After the tournament, Martin praised his players’ professional demeanor in not letting the competition come between them.

“I can come out of it with a sigh of relief that everything was copacetic and we can all meet at practice and feel good about it,” Martin said.

One benefit of head-to-head play between teammates is that it helps determine the lineup for team play in January, Martin said.

“It helps reinforce in my mind who deserves to be in certain spots, although it’s still way over two months before I have to make that decision,” Martin said.

Martin added that the fall individual tournaments are a good opportunity for players to learn more about their own game before the season.

“These individual tournaments are great for us because it has the guys play under pressure situations, and we find out what holds up and what’s breaking down,” Martin said. “It reinforces that we have to keep focusing on weaknesses. We can tell them many, many times as coaches, but until they realize it out here under pressure, sometimes it just doesn’t sink in.”

By winning the USTA/ITA Southwest Regional Championships two weeks ago, sophomore Mackenzie McDonald and freshman Martin Redlicki qualified for an invitation to be one of 20 doubles teams at the USTA/ITA National Indoor Intercollegiate Championships in Flushing, N.Y., this week. McDonald will also be competing in the singles draw.

The two players left for New York early Tuesday morning in order to practice on the indoor courts for a couple days before the tournament starts tomorrow.

The 6-foot-5-inch Redlicki won the doubles draw in this weekend’s Southern California Intercollegiate Championships, playing alongside fellow freshman Austin Rapp, who stands at 6 feet 4 inches. McDonald sat out the tournament.

Now Redlicki will have to transition back to playing with the 5-foot-10-inch McDonald.

“They’re very different,” Redlicki said. “Austin is a bigger guy, with a bigger serve. (Mackenzie) is more of a quick player.”