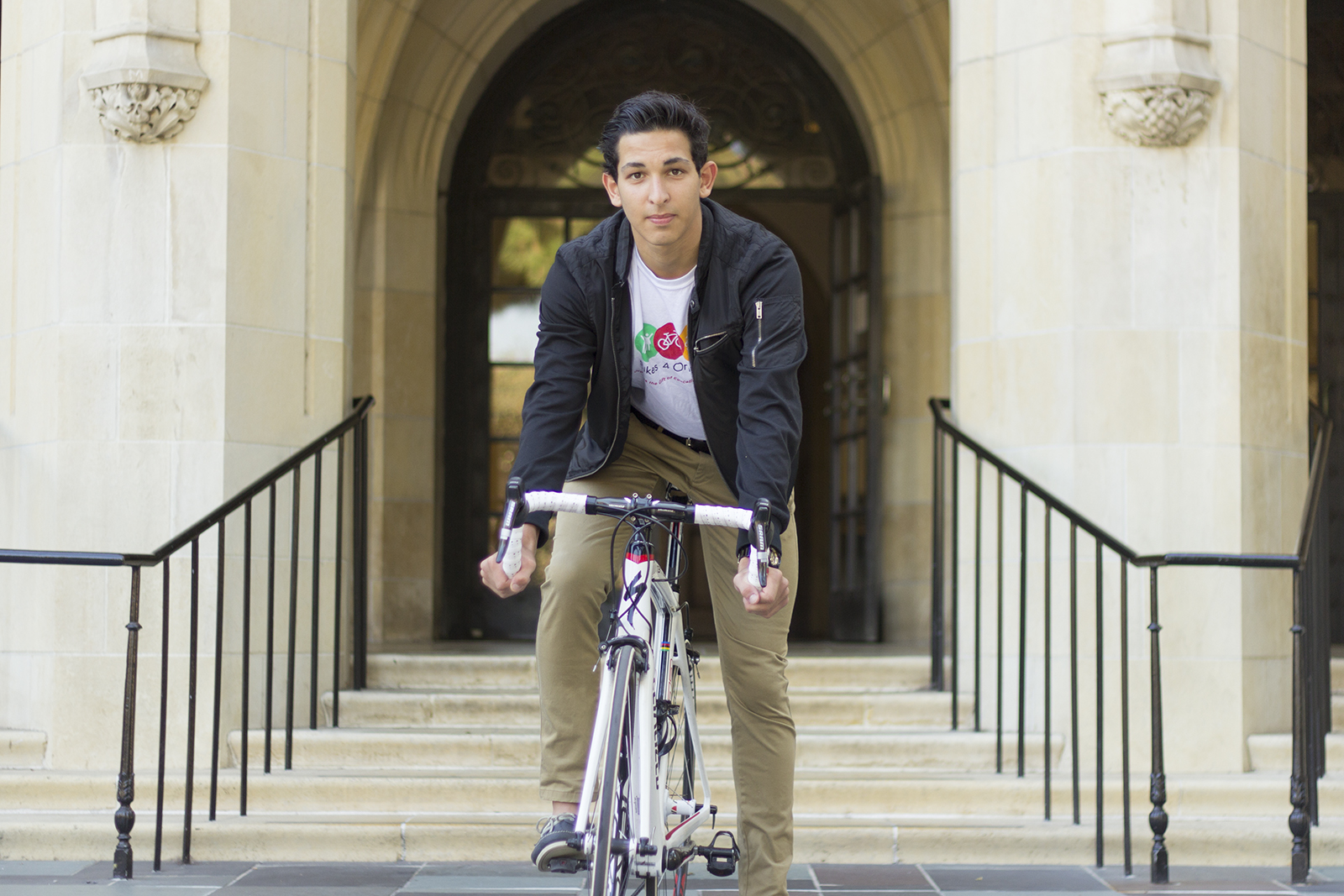 First-year Sebouh Bazikian mounts his racing bike, which helped inspire the charity he created when he was 16 to deliver bicycles to orphans who must walk several miles to get to school. (Angie Wang/Daily Bruin senior staff)

Professional cyclists streaking by in neon blurs made a lasting impression on Sebouh Bazikian. He was in eighth grade and at his first bike-a-thon, taking in the scene while pedaling at his own pace.

“Your whole body is propelling yourself to go that fast,” Bazikian said. “(And with cycling) there’s no excuse to fail. It’s all on you.”

Bazikian recently celebrated delivering more than 100 freshly minted bicycles to orphans abroad before becoming a Bruin this fall, an achievement made possible through a charity he started as a junior in high school. At his first delivery, Bazikian said he was able to use his passion for biking to teach children how to ride their new wheels.

The first-year neuroscience student founded Bikes 4 Orphans to help students get from their orphanages to their schools more easily in Kenya, South Africa and Armenia.

“If we, as a worldwide community, invest in education, make sure all kids have access to free education, the world will definitely be a better place,” Bazikian said.

The organization began as a result of a conversation he had with a family friend who had dedicated her life to helping children orphaned by AIDS in Kenya, he said.

The friend, Dr. Carolyn Rowley, ended her first mission in Kenya by promising to dedicate the rest of her life to serving orphaned children. It was a promise she is still working to fulfill 10 years later through the Makueni Christian Home for Assisting Orphans, where she founded the MACHAO Orphanage Foundation.

Rowley told Bazikian that children ages 6 to 13 often had to make a two-hour trek to and from school. Bazikian suggested giving children bikes – a solution that was more efficient than walking, but cheaper than motorized transport.

Once he realized Rowley took his suggestion as a promise, Bazikian brought the idea of donating bicycles to the orphanage to his younger brother.

“It was kind of hard to imagine it would ever come to this point because you always hear that people at (charity) organizations take a lot of time and effort. I never thought that this idea between my brother and I would become so big,” said Shawnt Bazikian, Sebouh’s 16-year-old brother.

After some deliberation, they decided to raise money for five bikes in order to fulfill Sebouh Bazikian’s promise without overextending themselves. Rowley informed them, however, that if not all 43 children who needed assistance getting to school could receive bikes, none of them would. To Rowley, the idea of a partial donation was unacceptable.

At that point, the Bazikian brothers said their fundraising efforts transformed from asking friends and family for donations to asking their community. As their fundraising events grew, their small-scale operation turned into a fully-functioning charity.

“My life wasn’t headed that way at all. It was a spontaneous decision for me,” Sebouh Bazikian said. “(At times) I definitely wanted to give up. We got rejected more than we could even count.”

Even as rejections piled up, Sebouh Bazikian said he knew he had to deliver the 43 bikes for the orphanage children. He said he hadn’t been serious about raising the money at first, but over time, his conviction merged his fundraising efforts with his passion for cycling.

Sebouh Bazikian organized a bike-a-thon on his own in October 2013 in Glendale. He and his team, composed of his brother and friends, networked with local businesses and the city council through Councilwoman Laura Friedman.

“For somebody, especially a young person, to organize such a big event for a cause that is distant and sort of esoteric is really incredible,” Friedman said.

The event raised $8,241, more than enough to buy the bikes for MACHAO. It also left a surplus for Bikes 4 Orphans second year, during which it delivered 80 bikes to other orphanages in Kenya, South Africa and Armenia.

Focus on Children Now, another organization that emphasizes education, facilitated the delivery of bikes to orphanages in Armenia. “We believe that the only way out of poverty is to educate our kids,” said Kariné Aboolian, the president and director of Focus on Children Now.

At UCLA, Bazikian said he’s stepped away from Bikes 4 Orphans to focus on his own education and keeping his grades up, handing off the reigns to his brother who has started a club at his high school and solicited other friends to do the same.

Bazikian said he hopes to start his own club here on campus by next year with a goal to donate 1,000 bikes before he graduates.