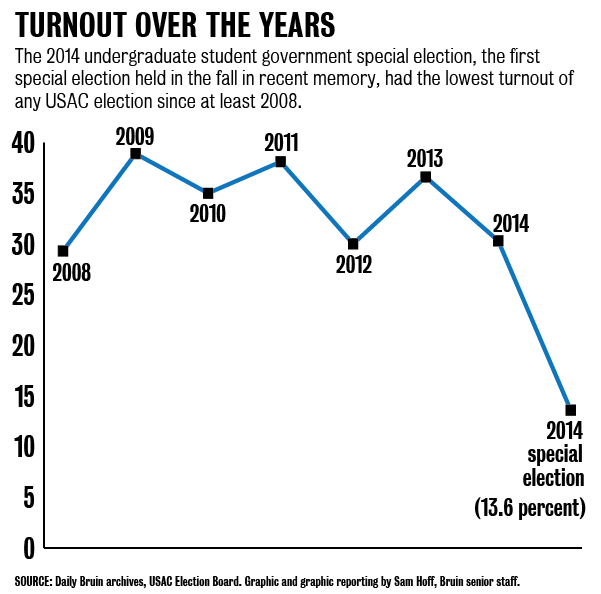 Following low voter participation in last week’s undergraduate student government election, some students are criticizing the efforts of the candidates, councilmembers and the Election Board in promoting the race.

With voter turnout at just 13.6 percent in the Undergraduate Students Association Council special election, the Green Initiative Fund referendum and the Bruin Diversity Referendum automatically failed to pass. Though both measures received a majority of the student vote, at least 20 percent of eligible students must participate for any referendum to pass.

Though the special election was a rare occurrence in USAC history and fewer seats were up for grabs than in a typical election, some councilmembers said they think the Election Board and the candidates could have done a better job of encouraging students to vote and be involved in campaign events.

“It’s not that people aren’t interested (in voting). What I saw was that people don’t know much about it,” said Shagun Kabra, Election Board chair. “Ultimately, the stakes are not high enough because there are fewer candidates.”

Throughout the election, voter turnout was a primary concern for councilmembers and the USAC Election Board. With only five candidates running and no official slate participation, some students said they thought the tone of the election was less competitive than usual and they were unsure about the effects on voter turnout.

Kabra said the 20 percent voter turnout threshold for the referendums and the 10 percent threshold for USAC constitutional amendments exist to ensure that final decisions affecting all undergraduate students for years to come aren’t made by a small population of students.

Kabra said he thinks the Election Board did everything it could to inform students about the election, making sure to keep its website updated and sharing information about how to vote on social media.

The board organized endorsement hearings, debates and a “Meet the Candidates” event for students to get to know the candidates and ballot measures.

The events the board held were not new in the elections process, but turnout was unusually low this fall, with about 70 students showing up to the debate and a few dozen students attending the endorsement hearing. Typically, hundreds of students attend candidate debates and show up to other events throughout the course of an election week.

The candidates and councilmembers behind the referendums also said they worked to increase voter turnout, primarily through social media and handing out fliers on Bruin Walk, which are common campaigning practices at UCLA. Many students changed their profile pictures, tweeted and shared links about the election.

Youmun Alhlou, who ran for general representative 2, said she thinks she did her part by campaigning through word of mouth, attending student group meetings and posting on social media. To her, it is the responsibility of the Election Board to encourage students to vote, she said.

“The representatives of the student body have to figure out better ways of (reaching out) to students, go to more events and be more proactive,” Quintanilla said. “With only 13 percent voter turnout, you don’t actually know whether the other students want you to be (on USAC).”

Despite the low voter turnout, Kabra and some other students said they think the fall election was a more positive experience for candidates, since it was less heated than general spring races. Some students also said they viewed the special election as useful preparation for spring.

“I think it’s good that the Bruin Diversity (Referendum) and the Green Initiative Fund referendum ran now. We were able to educate some students and received support from the people who voted,” Quintanilla said.

He added that he wanted the special election to be a testing ground, and that he may bring the TGIF referendum back in the spring without many changes.

Jazz Kiang, a third-year Asian American studies student and one of the authors of the Bruin Diversity Referendum, said he thinks the special election presented a unique opportunity for first-year and transfer students to partake in student government elections early on.

Kiang said he was initially disappointed because the referendum did not reach the threshold.

“When I realized the exact numbers, I was proud of the work that we did. In the end, the Bruin Diversity Referendum had a majority vote and it was a victory for us,” he said.

Kabra said he plans on asking for suggestions from candidates, campaign managers and councilmembers about ways to improve elections and possibly reform policies. He added that he plans to involve councilmembers more in events to inform the student body about USAC and the way it functions in hopes of garnering a higher percentage of the student vote.