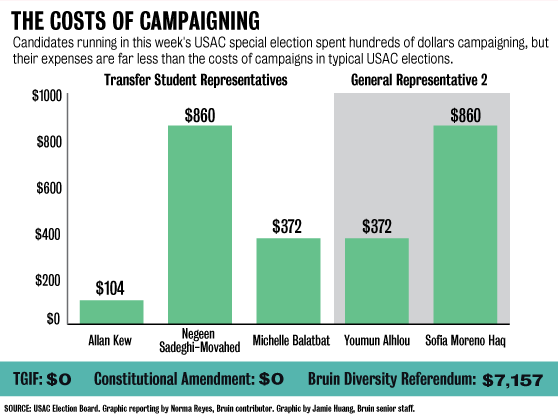 The original version of the headline accompanying this article contained an error and has been changed. See the bottom of the article for more information.

Candidates and referendum representatives spent about $9,700 campaigning in this week’s undergraduate student government election, less than half of what has typically been committed to recent races in the spring.

All candidates in the election have said they are running as independents, though the majority have formed joint campaigns. Typically, USAC candidates run with slates, which help students fund their campaigns.

Candidates are required to report their campaign expenses to the USAC Election Board, said Shagun Kabra, election board chair. He added that expense reports are documents that candidates are held accountable to during the election process.

Proponents of the Bruin Diversity Referendum of 2014 budgeted $7,157 for campaigning on their expense reports. Jazz Kiang, a third-year Asian American studies student and one of the main organizers of the referendum, said Thursday that they ended up spending about half of what they initially reported, or $3,500.

Kiang said he could not be more specific about funding for the referendum campaign because the groups did not keep track of their contributions. More than half of the money was used to make T-shirts promoting the referendum, while the rest was spent on stickers, buttons and fliers.

Although Haq and Sadeghi-Movahed reported that they did not spend any money on the expense account report they turned into the Election Board Oct. 10, the candidates spent about $1,700 on their joint campaign, said Kristine de los Santos, one of their campaign managers. The candidates said they did not report their final campaign costs to the Election Board because they did not spend any money until after the deadline to turn in the forms.

Sadeghi-Movahed, Haq and their extended families contributed all the money for their campaign, de los Santos said. The money fundraised for their campaign was used to buy fliers, Bruin Walk signs and to pay a cinematographer who created a video promoting the candidates, which aired on YouTube Tuesday night.

Balatbat said her parents provided the money for everything she bought, which included her Bruin Walk sign and stand and 5,000 fliers to promote her and Alhlou. Alhlou said she contributed about $120 and her parents contributed the rest of the money for her portion of the joint campaign. She said she is also campaigning online to save money and resources.

As the only candidate running alone, transfer student representative candidate Allan Kew spent the smallest amount of money on his campaign, amounting to about $100. Kew said he used the money to buy buttons, ink cartridges and paper for fliers, but he was not able to afford a sign on Bruin Walk.

Kew said students from his dorm floor helped him raise the money, but he was not approached by any student groups or organizations to help him raise funds.

Although he said he felt frustrated by the lack of funds for his campaign, he tried to make the best out of the advertising available to him. Instead, he wanted to personally approach and talk to students about their ideas and criticisms about his platforms.

The Green Initiative Fund, which passed in 2008, raised quarterly student fees by $4 to support projects that promote environmental sustainability on campus. The fund, which collects about $200,000 annually from student fees, is set to end in 2018. This year’s referendum aims to extend the funding for TGIF indefinitely.

This month, USAC officers voted to add a constitutional amendment to the ballot that would clarify how officer vacancies will be filled and extend the timeline for council to hold a special election that would not interfere with school breaks.

The proponents of the Green Initiative Fund extension and a USAC constitutional amendment on the ballot did not spend any money campaigning.

Voting for the election is currently open to students through MyUCLA and closes on Thursday at 11:59 p.m.

Correction: Campaign funding for the special election this fall is significantly lower than previous elections.