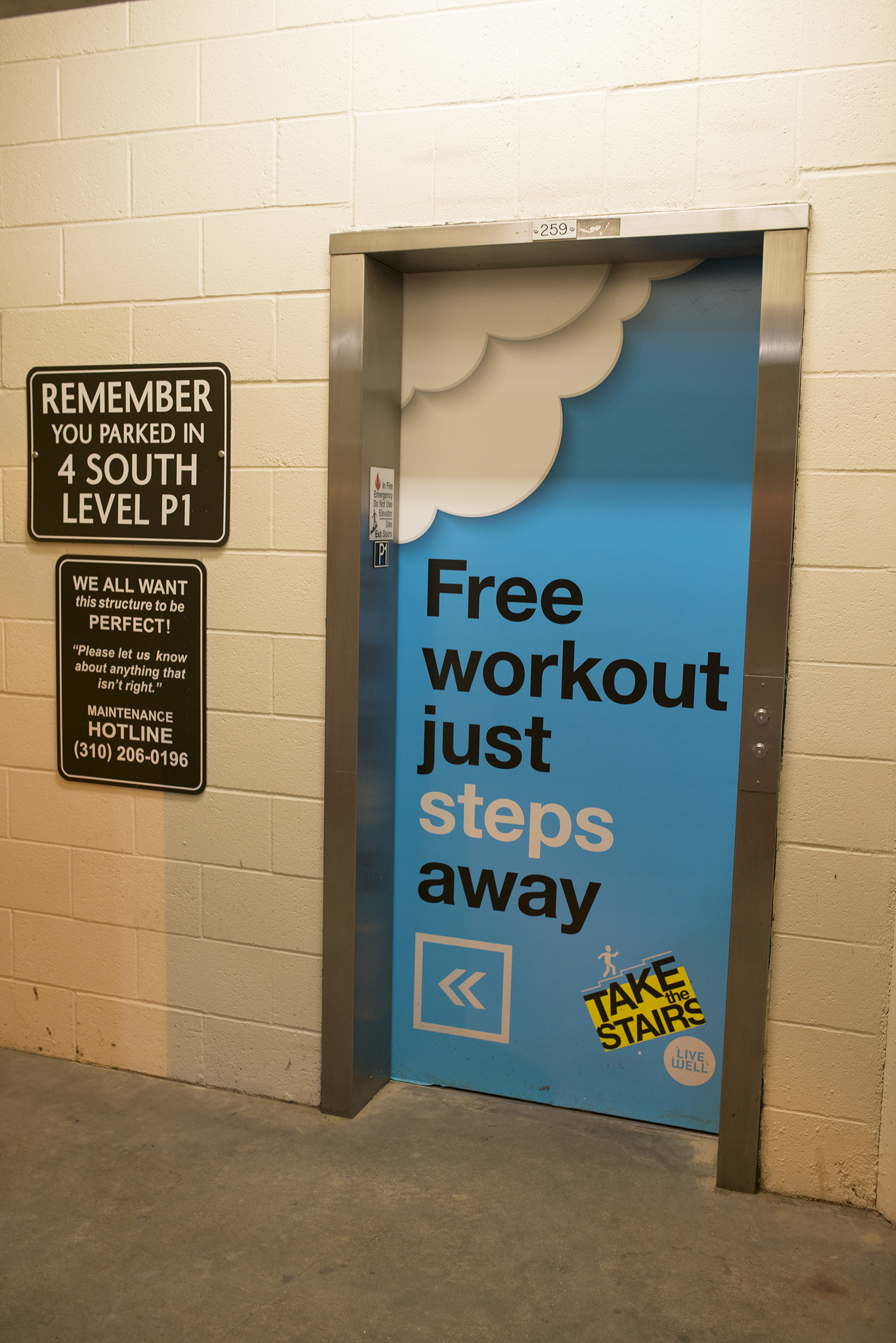 Signs encouraging students to take the stairs instead of the elevator are a part of the UCLA Healthy Campus Initiative, and appear in parking lots and structures around campus. (Angie Wang/Daily Bruin senior staff)

Regardless of how frequently students try to address issues of inclusivity and diversity, there still are communities at UCLA for whom the campus environment can be less than welcoming.

Disabled students are a prime example.

Recently, the lack of awareness about the needs and feelings of students with disabilities has become more obvious in the form of new signs that have sprung up around UCLA parking garages, including the Sunset Village lot and parking structures 4, 7 and 8.

These signs encourage community members to “take the stairs” in order to both burn calories and save electricity, and were primarily funded by the Healthy Campus Initiative, a campus-wide organizational effort that seeks to promote healthy lifestyle choices among faculty, staff and students.

By the time of publication, the Healthy Campus Initiative had not responded to request for comment.

The problem here lies not in the intention of the signs, but in the language they use. They feature phrases like “Burn calories, not electricity,” “No waiting two doors over,” or “Free workout just steps away,” and all end with the phrase “Take the stairs.”

This language is meant to subtly shame able-bodied people into feeling guilty about taking the elevator, and hopefully encourage them to take the stairs as some sort of “healthy” alternative. However, it more than subtly shames people with physical disabilities by implying that they’re either being wasteful or lazy by needing to take an elevator instead.

The language used on these signs is not only shameful; it’s ableist.

Ableism, or discrimination and social prejudice against those with disabilities, is pervasive in our society. Disabled persons have historically been denied equal access to public buildings due to a lack of ramps, elevators and other accommodations. This is not to mention the discrimination that disabled people have continually faced while accessing jobs and housing.

In 1990, the federal government passed the Americans with Disabilities Act, making it illegal to discriminate against people with both intellectual and physical disabilities. This law mandates certain levels of direct accessibility in public places – it’s why you see so many ramps and elevators on campus.

UCLA, like all universities that receive any federal funding, is beholden to the Americans with Disabilities Act and has an obligation to make its campus equally accessible and comfortable for community members with disabilities as for those without.

But just because it has been illegal to actively discriminate against persons with disabilities for the last 24 years doesn’t mean that centuries of subconscious social thought has gone away. People are unintentionally ableist, even if they aren’t directly discriminatory, and that’s still a problem.

Which is why these signs are so troubling; they indicate not malicious intent, but rather a lack of awareness in our community about the specific needs of people with disabilities.

“It’s really just a tone thing – every single word matters,” said Rachel Feldman, a fourth-year psychobiology student and the assistant commissioner of the Undergraduate Students Association Council’s Student Wellness Commission, which works with the Healthy Campus Initiative. “We can turn people off or give the wrong impression simply by the words we choose,” she added.

Not to mention, these signs are in your face. While some are posted on the sides of elevators, most of them cover the elevator doors from floor to ceiling. People with disabilities on our campus have to see these signs day in and day out, wherever they go. And they’re not just cropping up in parking garages. They’re also starting to appear in general campus spaces, like administrative buildings.

UCLA or the Healthy Campus Initiative – whoever gets there first – should take these signs down as soon as possible and consider posting new ones with more considerate language. They are ableist and, however unintentionally, they are discriminatory. The university has an obligation to create a campus culture that is safe and equitable for students with physical disabilities.

These signs are a far cry from that.