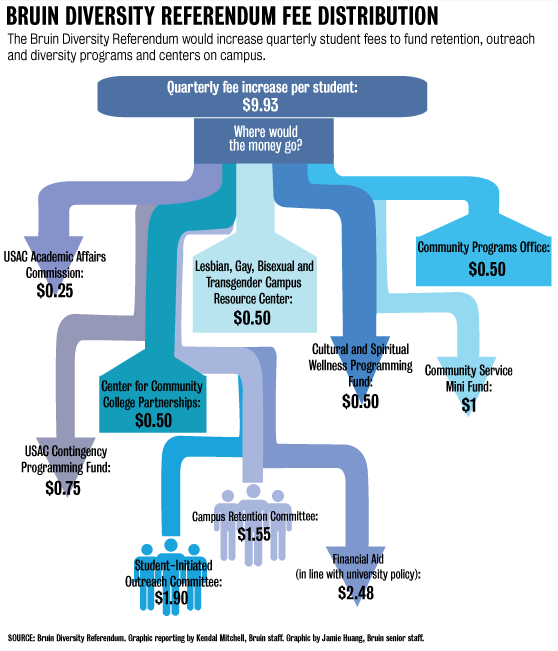 Campus diversity and retention programs may see their budgets increase by tens of thousands of dollars in spring quarter if students vote to raise student fees this week.

The Bruin Diversity Referendum calls for an increase in undergraduate student fees by $9.93 per student each quarter. In total, the fee increase would raise more than $850,000 each year.

The referendum is modeled after a similar initiative that failed to pass, with 52.1 percent of voting student rejecting the initiative, in the Undergraduate Students Association Council spring 2013 elections. The authors said they used the old language for legal reasons since they did not have enough time to get new language approved by administrators.

Funding from the referendum would be set aside for various programs in different USAC offices. Other campus resources that would receive funds include the Lesbian, Gay, Bisexual and Transgender Campus Resource Center, the Center for Community College Partnerships and the Community Programs Office.

Jazz Kiang, a third-year Asian American studies student and director of the Asian Pacific Coalition, said he and other student leaders wrote the referendum because they think that as faculty vote on the implementation of a diversity requirement and UCLA searches for a vice chancellor of equity, diversity and inclusion, more students may be focused on campus diversity issues.

When the Bruin Diversity Initiative did not receive the required majority vote to pass in 2013, Kiang said he and other supporters talked about pushing for the measure again, but did not know when to propose it.

After Los Angeles Mayor Eric Garcetti proposed a minimum wage increase during the summer, authors of the referendum had a tangible timeline, Kiang said.

A majority of the student organizations that would receive funding from the referendum employ students for minimum wage services, Kiang said. Without an increase in overall revenue, students would get paid a higher wage but may be forced to work fewer hours if their employers cannot afford to keep pace with rising costs. Kiang said this also may decrease the amount of time various departments can offer services to students.

Kiang said the referendum aims to create new funding pools so students can keep their weekly shifts as the minimum wage increases.

Kim-Thy Nguyen, a Vietnamese Student Union retention coordinator for the Campus Retention Committee and a fourth-year psychology student, said she gave suggestions about how to adjust allocations from the 2013 initiative.

The Campus Retention Committee operates on a budget of $600,000 a year, said Lila Reyes, chair of the committee. It allocates all its funds every year to services for students, such as providing a study hall, driving students home in vans and organizing a food closet, she said.

“If the budget (for the Campus Retention Committee) stays the same, we will have to cut the amount of projects we have by half or more,” said Nguyen.

If the referendum passes, the Campus Retention Committee would receive more than $133,000 a year.

Tony Sandoval, director of the Community Programs Office, presented at a USAC meeting on Oct. 14 about the positive impact the Bruin Diversity Referendum would have on its budget. While he did not give any specific figures about the budget, Sandoval said the funds would go toward the CPO Student Association, Student Retention Center, Student-Initiated Outreach Committee and Student Risk Education Committee.

Because the timeline to get the referendum approved by council was just a few weeks, the authors felt they did not have time to consult all the organizations that would be affected by the fee increase, Kiang said. Some campus groups did not know they were included in the referendum until authors presented it at a USAC meeting on Oct. 7.

While the LGBT Resource Center does not require students to sign in, Bhattar said he estimates between 10,000 and 15,000 students visit the center or its website every year. He said that if the referendum passes, he plans to use the new funds to increase student access to counseling, mentoring and leadership opportunities and to hire new interns.

“Our resources do not increase to meet student need,” Bhattar said. “We constantly struggle to meet the needs of students.”

The referendum would also create two new funding pools, the USAC Academic Affairs Commission Academic Travel Mini Fund, which would provide stipends to students who want to travel to academic, research or leadership conferences, and the Cultural and Spiritual Wellness Programming Fund.

Some student leaders said they wished they were consulted about the referendum’s language before it was brought to and approved by council.

“I’m trying to best understand (the referendum) like any other person because I was not in the discussion (during its drafting),” she said.

If passed, the referendum would increase USAC’s contingency fund by more than $64,000 per year. Currently, the fund has a budget of $75,000 for the fiscal year. Any surpluses go back into the fund for programming for the next year.

Wang said she thinks there was not enough research done by the authors of the referendum about the nuances of individual funding sources.

“They needed to do more research about the funding sources (because) there are a lot of student fees connected (to the referendum),” Wang said.

Representatives from the Community Service Mini Fund, Cultural and Spiritual Wellness Programming Fund, Center for Community College Partnerships and Student-Initiated Outreach Committee could not be reached for comment.

Students can vote in the fall special election from Tuesday to Thursday though MyUCLA.