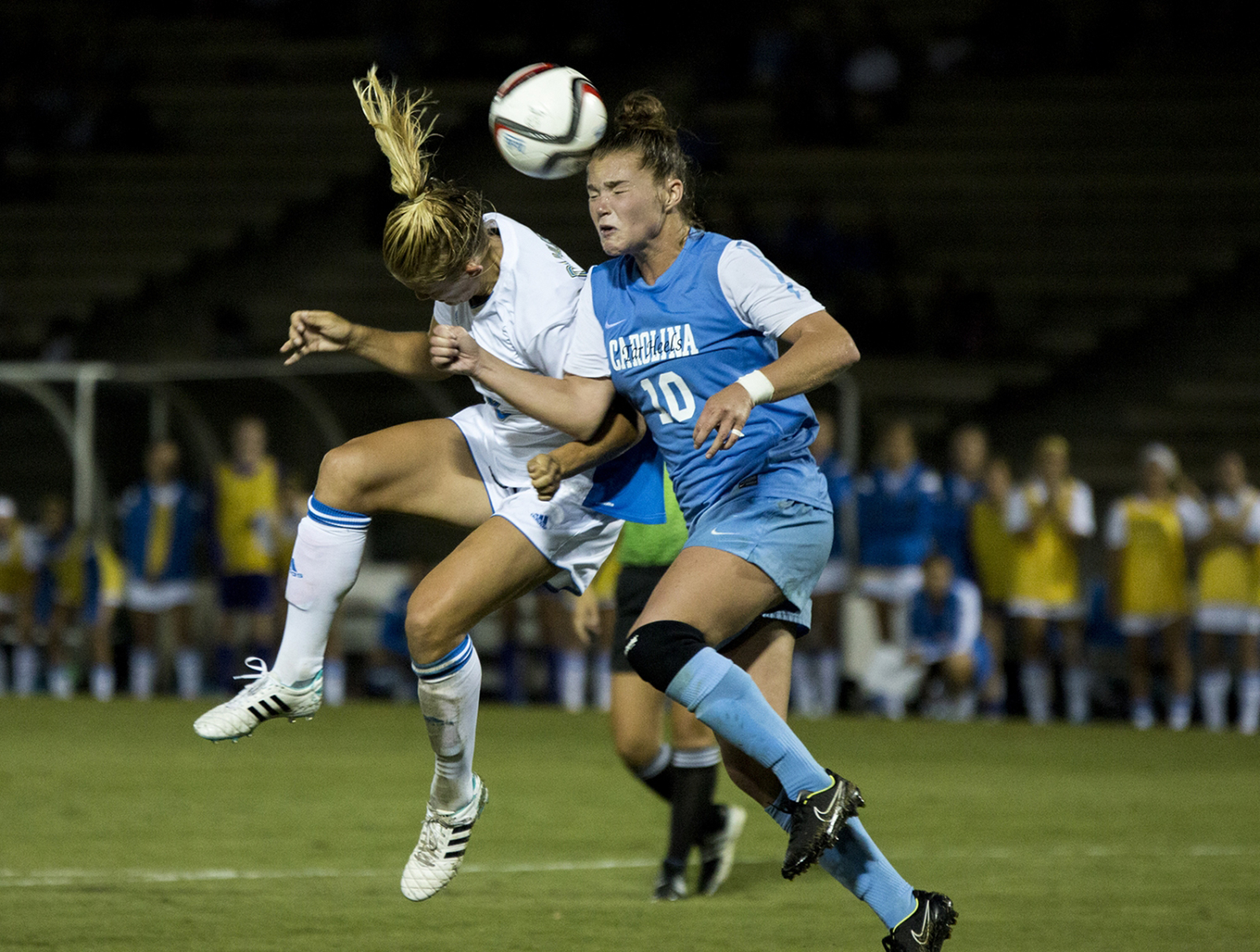 With concussions and head injuries being at the forefront of sports injury news in recent years, the act of heading in soccer has emerged as a topic of concern. (Daily Bruin file photo)

The play was a routine in-game situation.

A goal kick soared through the air toward the head of junior forward Kodi Lavrusky, who was ready to knock the ball into play during a game against UC Irvine.

Instead of ricocheting off her forehead, the ball deflected off the crown of Lavrusky’s head. The impact temporarily blinded her and caused stars to burst before her eyes.

“It kind of shook me up a little bit — I’ve never felt anything like that from a header,” Lavrusky said. “I couldn’t see for a couple of seconds and I had to keep my footing. The next couple days … I had a pretty serious headache. I had to take a couple days off to be safe.”

Lavrusky was not concussed, just badly shaken. It was a considered a freak accident, an abnormal occurrence, a one–time thing.

“There are concussions constantly on the field. I think (the NCAA and FIFA) don’t see it, and there’s no studies,” Fawcett said. “They want facts. They want studies done and that just takes a lot of time … I do think they’re behind the times that way, but I do understand they want it proven.”

In an effort to lessen the chance of concussions and other head injuries from headers, Fawcett is spearheading the Parents and Pros for Safer Soccer Initiative. The movement seeks to raise the age limit on teaching heading from 10 to 14, so that children reach adolescence before beginning to make contact between the ball and their head.

The movement partners with the Santa Clara Institute of Sports Law and Ethics and the Sports Legacy Institute, who conduct research specific to head injuries sustained in soccer. According to their press release in conjunction with Parents and Pros for Safer Soccer, research has already proven that 30 percent of concussions that occur on the soccer field are related to heading the ball.

The danger of concussions has seen increased publicity, but rarely in the realm of women’s soccer. In other arenas, these sometimes-silent killers are more visible: football players ramming into each other helmets-first, hockey players getting laid-out on rock-hard ice, Mixed Martial Arts fighters and boxers receiving numerous blows to the head.

“The act of heading itself, particularly in a practice setting or in a structured setting may not be as injurious as people are thinking,” said Dr. Christopher Giza, a pediatric neurologist with the UCLA Steve Tisch BrainSPORT Program, which focuses on concussion research and prevention. “As part of the game, though, it’s hard to separate from the other risks, and you can certainly get concussions or collisions in the act of heading in a soccer game.”

The necessity of a rule change is not agreed on, however. UCLA coach Amanda Cromwell believes that such measures would have a negative impact on the sport.

“I think (heading) is a vital skill. There’s not enough coaches teaching it the right way, that’s the problem,” Cromwell said. “I think some aspects of the game will be missed out on. I don’t think it’s good for the game to just … say ‘you can’t head the ball till 14.’”

The risk of serious brain injury following concussions increases when head trauma reoccurs. Players who stay in the game increase their chances of being more gravely hurt.

“There are hypotheses that hitting your head repeatedly, even if you don’t get symptoms, could lead to long-term problems,” Giza said.

For soccer players in the competitive college soccer environment, voluntarily exiting a match is rare, since playing time is so coveted, Fawcett said. Even after seeing stars, Lavrusky chose to remain in the game instead of asking for a substitution.

“I stayed in (and) I didn’t report it actually. After I came out and I went to the athletic trainer and told him what happened,” Lavrusky said. “I took a concussion test after the game … If I would’ve kept playing and something else would’ve happened it would have been bad.”

Due to this competitive culture, Fawcett said the institutions in charge of the playing field are responsible for changing it.

When it comes to the issue of concussions in women’s soccer, the players, coaches and the programs are not united in realization or resolution of the problem. Studies are currently being conducted while players continue to become injured. Fawcett believes that her proposition is a realistic solution for the current situation.