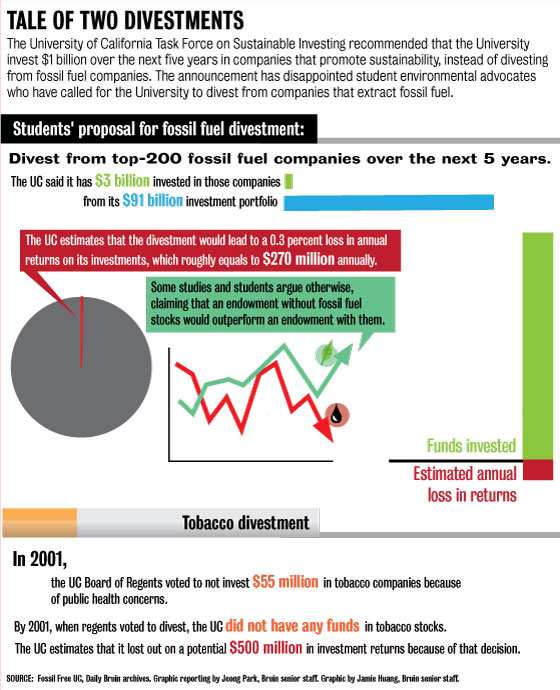 The University of California’s Task Force on Sustainable Investing recommended this week that the UC invest $1 billion over five years in companies that promote sustainability, rather than divesting from fossil fuel companies as student advocates have called for.

In a statement released Wednesday, the University said the majority of members in the task force believed that immediate divestment from companies that extract coal or other forms of fossil fuel is not an effective tool to addressing climate change.

“We could have made a narrow divestment decision, but the University is not in the business of taking the easy route,” said UC Chief Investment Officer Jagdeep Singh Bachher, who led the task force, in a statement. “This is a more difficult path but one we feel will be more effective over time.”

The task force’s recommendations, which also urge the UC to create a framework for sustainable investment by the end of this fiscal year, come from a report the task force released on Tuesday. The UC Board of Regents’ Committee on Investments, which includes Student Regent Sadia Saifuddin and Student Regent-Designate Avi Oved, discussed those recommendations in its meeting Friday at the UCLA James West Alumni Center.

The entire UC Board of Regents will also discuss and vote on those recommendations during its meeting Wednesday at UC San Francisco’s Mission Bay campus.

The task force was called in May after many students led protests calling for the UC to divest from fossil fuel companies. Other universities, such as Stanford University, have announced that they are divesting. In the meeting Friday, Bachner said the University would have sold off $3 billion out of its $91 billion portfolio if the UC divested from 200 fossil fuel companies, as Fossil Free UC, a student organization advocating for this divestment, has been calling for.

Initially, the task force’s report included a clause that said divestment from fossil fuel companies would have a greater cost than benefit and would not meaningfully impact climate change in itself. After the task force’s Tuesday meeting, the clause was struck out from the report.

Regents in the Friday meeting had nearly across-the-board support for the recommendations.

“I do feel that some people who are involved in this are underappreciating the $1 billion investment in sustainable companies,” Wachter said. “Finding (a) solution is really what’s going to change the world.”

However, some were worried that the plan may restrict the UC’s freedom to invest, as the University would be required to invest $1 billion into companies that promote sustainability.

Some student advocates said they were left unsatisfied by the task force’s recommendation.

Alden Phinney, a third-year global economics student from UC Santa Cruz who is part of the task force, said he thinks divestment would have a minimal impact on the UC’s financial portfolio. He said some external studies have showed that divesting from companies that extract fossil fuels has no negative financial impact.

UC spokeswoman Dianne Klein said the University’s estimate showed that divesting from fossil fuel companies can cost millions in transaction costs for selling and buying stocks and would lessen the University’s overall investment returns. On Friday, Klein said divesting from fossil fuel would have led to an annual loss of 0.3 percent in returns for the UC’s investment portfolio, which is about $270 million a year.

Phinney added that students, including himself, have argued that fossil fuel divestment is morally and ethically the right thing to do and that fossil fuel companies commit human rights abuses because they help expedite climate change.

“(The) UC is trying to address the solution without addressing the problem,” Phinney said. “It’s not going to shift the needle on climate change.”

Divestment is not unheard of for the UC, which has in the past voted to divest from tobacco companies and companies involved with operations in Darfur, Sudan, the center of a large-scale genocide.

However, University administrators have also voiced their skepticism of divestment as a tactic in the past. UC President Janet Napolitano, when asked by the Daily Bruin’s editorial board about students calling for divestment from companies that profit from the Israeli occupation, said divestment is a tool that should be used rarely, if at all.

Phinney said Fossil Free UC, which he is a member of, will continue leading protests at the regents meeting.

Correction: The UC has about $3 billion invested in fossil fuel companies.