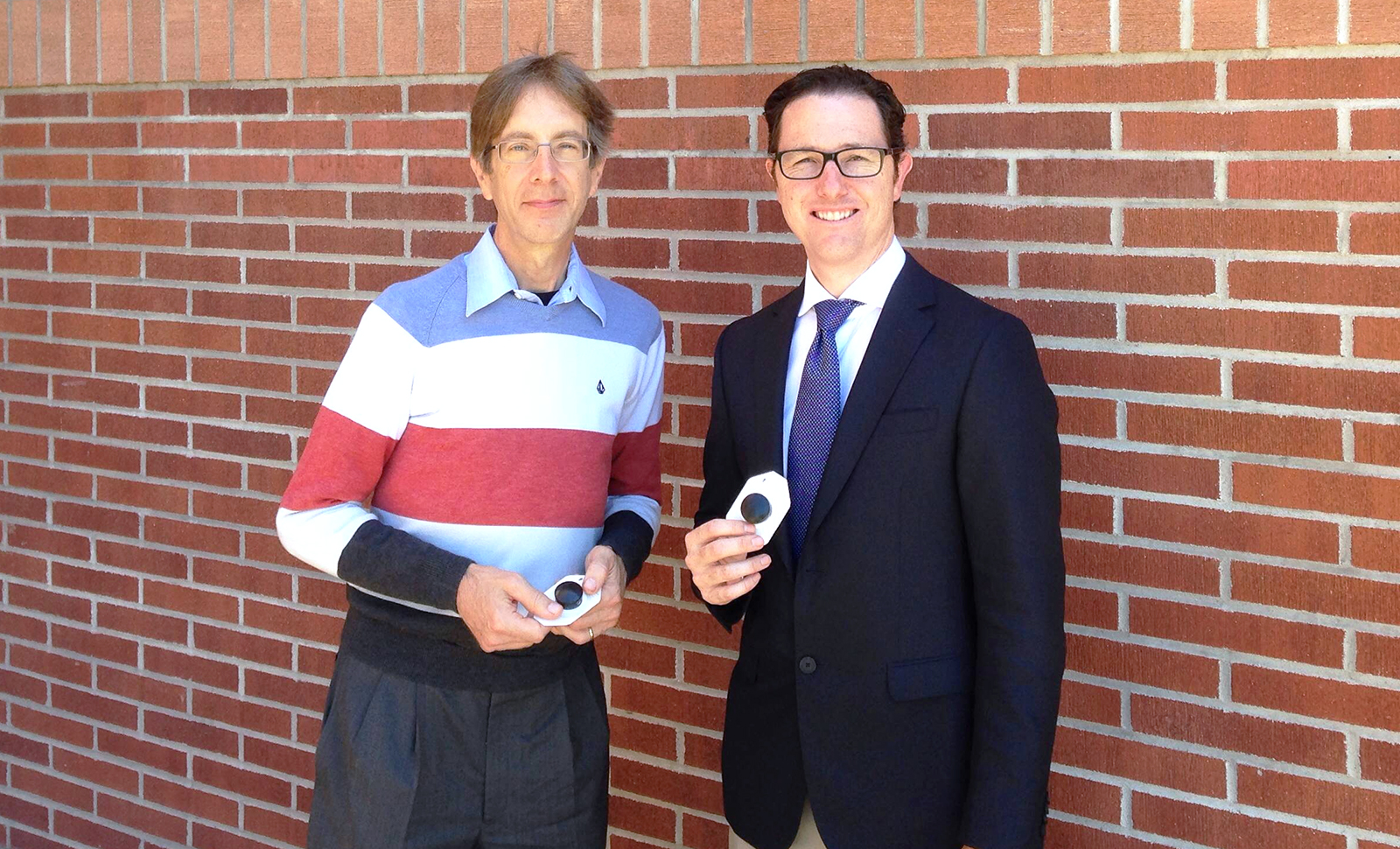 William Kaiser (left) and Brennan Spiegel (right) developed a biosensor that monitors stomach noises and can be used to monitor the stomach after surgery.
(Courtesy of William Kaiser)

Just as a stomach grumble can indicate hunger, some vibrations of the intestine – many undetectable to the human ear – can indicate whether a person is ready to be fed.

Over the past two and a half years, UCLA researchers have developed a device, called an AbStats biosensor, that detects these sounds.

The biosensor monitors stomach noises and can be used to monitor the stomach after surgery, detect bowel disorders and determine when a person should stop eating.

Researchers at the David Geffen School of Medicine at UCLA and the UCLA Wireless Health Institute initially developed AbStats to diagnose a malfunction of the intestines after surgery, informing physicians if a patient was ready to be fed. By potentially providing a more accurate diagnosis, researchers say the device could result in shorter hospital stays, decreased health care costs and better outcomes for patients.

Traditionally, the state of the bowel was only monitored using a stethoscope, a 200-year-old device, said Dr. Brennan Spiegel, a professor at the Geffen School of Medicine and the Fielding School of Public Health.

Spiegel said he and the other researchers wanted to see if a computer could measure bowel signs just as accurately, allowing for monitoring over a longer time scale. The researchers are currently using the AbStats in clinical trials to determine its accuracy compared to the stethoscope.

The AbStats biosensor allows for continuous monitoring and detects abdominal sounds that may occur when no one is present to observe them, said William Kaiser, a professor of electrical engineering and co-director of the Wireless Health Institute. The sensor is secured to the belly via an adhesive tape. A plastic cap, which is disposable, is used to measure clicking noises in the stomach that occur when the intestines press against the abdominal wall.

Then, a computer measures the intestinal rate, or the number of clicks per minute, and indicates whether the stomach will be able to properly digest food.

About 25 percent of abdominal surgery patients develop post-operative ileus, a condition in which intestinal movement is slower after an operation, resulting in improper digestion, Spiegel said. In certain cases, the intestines can be completely paralyzed after surgery.

Of these patients, between 10 and 20 percent are fed too early and exhibit vomiting or other complications that lengthen their hospital stays, Spiegel added.

For some patients who are fed too early, doctors must place a tube through the nose to the gastrointestinal tract to suck up air, an experience that can be traumatizing for many patients, said Marc Kaneshiro, a gastroenterology fellow at UCLA.

The Wireless Health Institute has recently partnered with the company GI Logic, which has licensed the AbStats technology and is now preparing it for commercial sale.

Kaneshiro said he is excited by the prospect that AbStats could be used on every operative patient in the hospital, potentially making it a game-changer for the future of medicine.

Outside of the hospital, AbStats could be used to help people in daily life to determine the best times to eat. For humans, the stomach empties every 90 minutes. If people consistently eat too early, it can disrupt this cycle and hormone levels, possibly leading to damaged intestines, Spiegel said.

Spiegel said he eventually hopes to create a smartphone application that can connect people using AbStats to social networks, helping them lose weight by measuring their gastrointestinal signs.