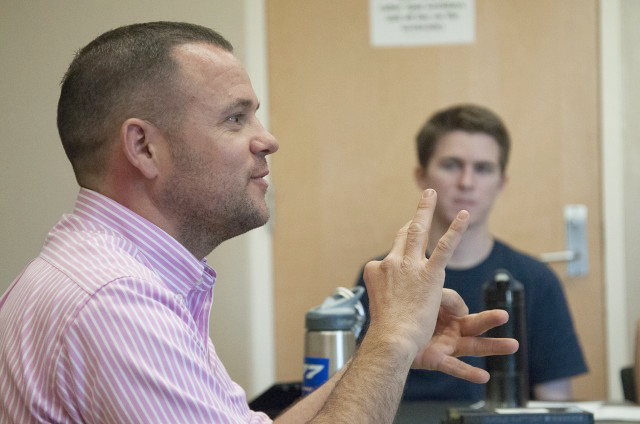 The faces from the videos in the museum exhibit spoke to Benjamin Lewis, but he could not hear what they were saying.

The lecturer in American Sign Language said he thought a permanent exhibit at the Museum of Tolerance would better serve the deaf community if the video testimonies of the Holocaust victims and survivors were in sign language.

“I saw that (the museum) didn’t have as much access for the deaf community as other museums,” said Lewis, who was born deaf. “I didn’t want to complain. I wanted to be proactive about the problem.”

The Museum of Tolerance, which memorializes the events of the Holocaust and aims to educate people about modern-day prejudices, is on its way to join a number of major museums in Los Angeles that already provide services for people who are hearing impaired, including the Getty Center, California Science Center and Griffith Observatory.

In the spring, Lewis asked students in his Elementary American Sign Language course to translate the audio portions of a video timeline about the Holocaust into 18 signing videos as a final project. People would then be able to watch videos about the exhibit from iPads as they tour the museum.

Over the spring quarter, the students from Lewis’ class recorded themselves signing different stories and testimonies of Holocaust victims and survivors from World War II. They also compiled transcripts of the videos for the project, said Mariam Janvelyan, a fourth-year linguistics and psychology student who participated in the project and the president of Hands On, the only sign language club at UCLA.

Lewis first reached out to the Museum of Tolerance more than a year ago to determine whether his project was feasible. Liebe Geft, director of the museum, said she loved the idea and quickly agreed to work with Lewis on it.

The museum is responsible for providing the funds for the technological devices on which the videos will be viewed, Geft said.

The installation of the videos should be finalized by early September, Lewis said. Currently, most of the videos are going through final edits and are being sent to the museum, Lewis added.

Some students in the class said taking on the project was challenging for them, especially because of the serious subject matter they would be signing about.

Janvelyan’s video was a compilation of four different stories about victims and survivors of the Holocaust. She said she was worried about the task at first because she wasn’t sure she would be able to do justice to the testimonies through her video.

“I didn’t want to do (the project) initially because I was scared,” Janvelyan said. “I wanted to make sure deaf people got the same emotional reaction as I had from the audio.”

Eyal BenDavid, a UC San Diego alumnus, said he got involved with Lewis’ class project because he was a part of Hands On. He said his friend from UCLA told him about the club after he started teaching himself sign language during his spare time a few years ago.

“I really connected with (American Sign Language) since you’re communicating with your whole body and able to express so much more,” BenDavid said.

When Lewis invited him to be a part of the project, BenDavid said he was worried that he wouldn’t be able to sign quickly enough to keep up with the audio’s narration. Still, he decided to take on the challenge because he thought the project would be helpful to members of the deaf community.

After about three weeks of filming, Lewis said he did a pilot test of some of the completed videos with members of the deaf community. With their feedback, he made final edits, such as changing the speed at which captions appear in the videos.

Lewis said he hopes the project will be one step toward making Los Angeles museums more accessible to the deaf community.

“(American Sign Language) is something that is a not really a priority in life for a lot of people,” he said. “(My class) wanted it to be more prominent because it’s a natural language for deaf people.”

Lewis said he’s considering approaching other museums in Los Angeles, such as the Hammer Museum, about improving their accessibility for the deaf. For now, he plans to hold off on another project until he meets his next American Sign Language students in the fall.