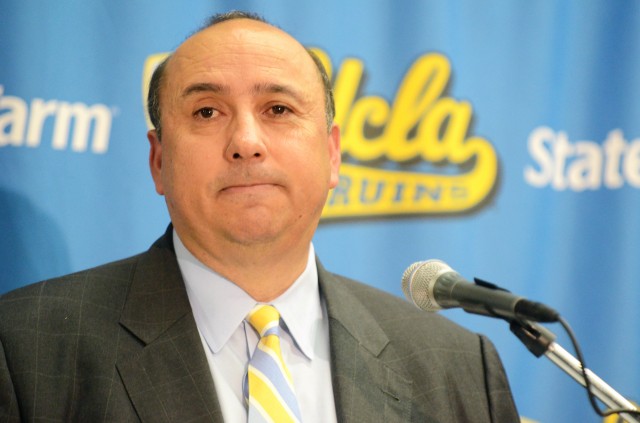 UCLA’s basketball teams will still play in Pauley Pavilion for the entirety of this season despite Tuesday’s flood, UCLA Athletic Director Dan Guerrero confirmed in a press conference on Wednesday afternoon.

“After getting the water off yesterday and bringing the experts in, we’ve been assured today that we will play in Pauley this year,” Guerrero said.

While the court sustained some warping and damage, Guerrero was confident that any renovation that may be necessary could be completed by that time.

Guerrero was unable provide a timeline for repairs and said it was too early to give an estimated cost of the damages.

Besides the court, most of Pauley Pavilion seems fine, Guerrero said. Although water flowed into the Pavilion Club and the locker rooms, the building sustained no structural damage besides some possible renovation needed to the carpet and drywall.

“I would certainly like Athletics not to have to foot any of the bill and I don’t believe we will,” Guerrero said.

As for where the teams will practice as Pauley Pavilion undergoes renovation, Guerrero said the basketball teams will need to use any available facilities they can, listing the Wooden Center and the Student Activities Center as options.

The John Wooden Center will remain closed for the next several days but, in a “perfect world,” could reopen as early as Monday, officials said Wednesday.

However, the Wooden Center’s Collins Court was significantly damaged in Tuesday’s flood, forcing the volleyball team, which was planning on playing its games there this year, to find a new home in the short term as well.

The main issue now with the Wooden Center is its lack of power, as its electrical vault is located in Lot 4 and is underwater, said UCLA Recreation Associate Director of Facility and Event Operations Rich Mylin. Collins Court and the racquetball courts on the first floor also sustained significant damage.

The east half of Wooden’s first floor, which contains the rock wall, racquetball courts and Collins Court was flooded Tuesday, and officials are hoping to know by Friday whether the floor at Collins Court needs to just dry out or be replaced, Mylin said.

While all the standing water has been drained from the center, crews are still extracting water from the carpets and Mylin said they will then determine whether the carpets are in a position to mold, in which case they would need to be replaced.

While the Wooden Center remains closed, the Intramural Field is open, as the water drained from it overnight, making the field playable.

The damage to Acosta Athletic Complex was minimal, with the water slightly encroaching on the weight room and coaches’ offices, but nothing significant, Guerrero said. The facility should be fully operational by the time the football team returns from training camp in San Bernardino after Aug. 16.

Guerrero added that Drake Stadium, which was also flooded, will be fine for the soccer and track seasons. There is silt on the track, but Guerrero said people were running on it Wednesday morning.

Despite all the damage to UCLA Athletics facilities, Guerrero said it could have been even worse.

“I have a great team of people (who) work in this department and in conjunction with the people on campus, we really mitigated a lot of the damage that could happen,” Guerrero said.

He pointed to the UCLA Athletics Hall of Fame as an example, where volunteers, staff and student-athletes worked together to remove water from the facility, saving UCLA’s 111 NCAA championship trophies and memorabilia, saying the only damage to the Hall of Fame was the carpet.