Students gather on campus to celebrate end of Ramadan 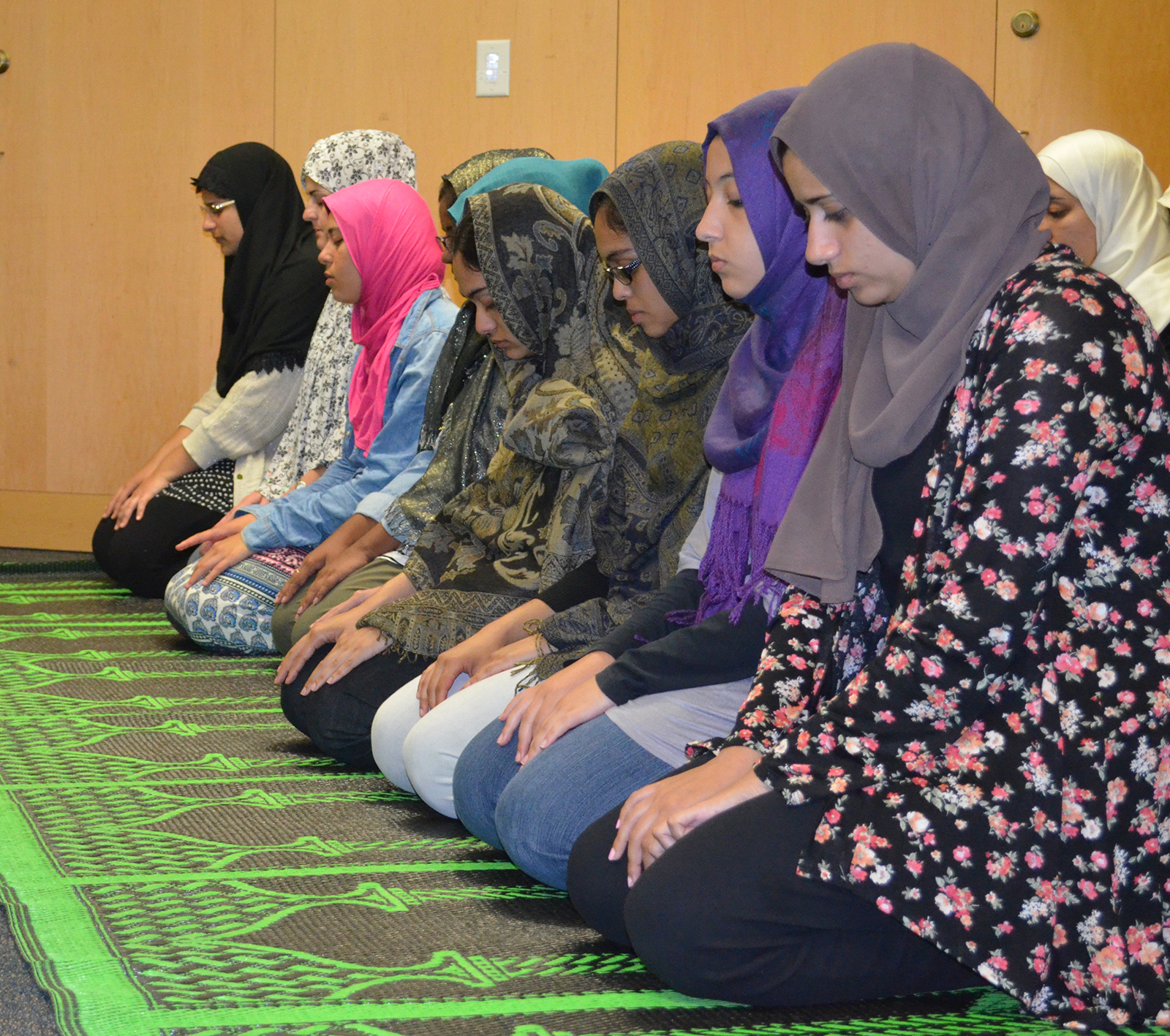 Muslim students gather in the basement of the Student Activities Center to pray and break their fasts together. (Evaneet Sidhu/Daily Bruin)

Sarah Bundogji woke up at 3:40 a.m. and ate her suhoor, or pre-dawn meal, alone.

The UCLA alumna celebrated the first days of Ramadan, the ninth month of the Islamic calendar, for the first time away from her home in Orange County as she finished up her last summer classes.

“I figured I could just celebrate Ramadan (at UCLA) because there’s a lot of students here over summer,” Bundogji said. “The idea is to celebrate with your community anyways and I have that here.”

After a month of fasting and waking up before dawn, members of the UCLA community celebrated the end of the holy holiday on Monday.

Ramadan consists of a monthlong fast for Muslims across the world. It is said that during this time of the year, the Quran, the religious text Muslims observe, was revealed to the Prophet Muhammad.

During this time, observers fast from dawn to dusk and abstain from all forms of base desires and physical needs – anything from food to foul language, said Neyamatullah Akbar, a fifth-year biology student.

The holiday is meant to be a month of reflection during which people rekindle their relationships and connections with God, Akbar said.

“Ramadan shows you who you really are because it’s a good time to find out what you need to work on,” Akbar said. “I fast to become more God-conscious.”

Around 8 p.m. a few nights each week, dozens of Muslim students gathered in the basement of the Student Activities Center to pray and break their fasts together. The Muslim Students Association, which hosted the Iftar dinners – the meal after sunset that breaks a person’s fast – sometimes partnered with the UCLA Community Programs Office to supply the food, said Wali Kamal, a third-year applied mathematics student and the club’s president.

Jenan Shukry, a UCLA alumna, said if she were back home celebrating with her family, they would eat dates and soup before they prayed and had their Iftar dinner.

“It’s lonely to break your fast alone, but it’s nice to have a substitute at (UCLA),” Shukry said.

On the last Wednesday of Ramadan, trays of seasonal fruit and dates lined one table as barbecue chicken and pulled beef simmered on a different table. Students only nibbled on the fruit before the Maghrib, or sunset prayer.

Because the Islamic calendar is based on the lunar cycle, the start of the holiday varies every year. The Muslim community debates over when the holiday begins because different parts of the world see the crescent moon at different times, Shukry said.

A large portion of the Muslim community at UCLA observed June 28 as the first day of Ramadan because the closest mosque in Culver City adhered to Saudi Arabia’s moon sighting as the beginning of Ramadan, Shukry said.

Before the students lined up for food, donated by different vendors throughout Los Angeles, they observed the maghrib on the other side of the basement.

If an imam, or leader of the Muslim community, is not available to recite the tarawih, which are additional prayers at night during the time of Ramadan, the person who has memorized the most passages of the Quran can do it, said Nuraldin Ali, a UCLA alumnus who led the group in prayer on some nights.

During the first week, Ali said he wanted this Ramadan to be a time when he could be at his spiritual peak. Although he had a difficult time spiritually connecting with the essence of the holiday for the first half of the month, Ali said seeing the current conflict erupt between Israel and Palestine empowered him to persevere.

“Islam is a very communal religion and it’s nice to take a step back from the material world,” Ali said.

Some female students wore traditional Muslim clothing, like the abaya, a long-sleeved and floor-length outer garment, and several male students walked around in free-flowing thobes, a long robe that covers the man’s arms and legs.

Even some students who are not as connected to Islam celebrated Ramadan.

Safwan Ibrahim, a fourth-year comparative literature student, said he doesn’t practice Islam regularly, but he fasts about every other day in solidarity with other Muslims. After he discovered the student group hosts weekly Iftar dinners, Ibrahim said he found a sense of home and community at UCLA.

“This religion brought us all together, but our different backgrounds liven up the place,” Ibrahim said.

As for Bundogji, she said she spent the last few days of Ramadan at home because it’s a tradition for her extended family to gather and celebrate at her parents’ house.

“My family lives in different parts of California and this is the only time of the year when we all get together,” Bundogji said. “There’s a lot to be grateful for.”