TimeOut program connects students with seniors who have Alzheimer’s 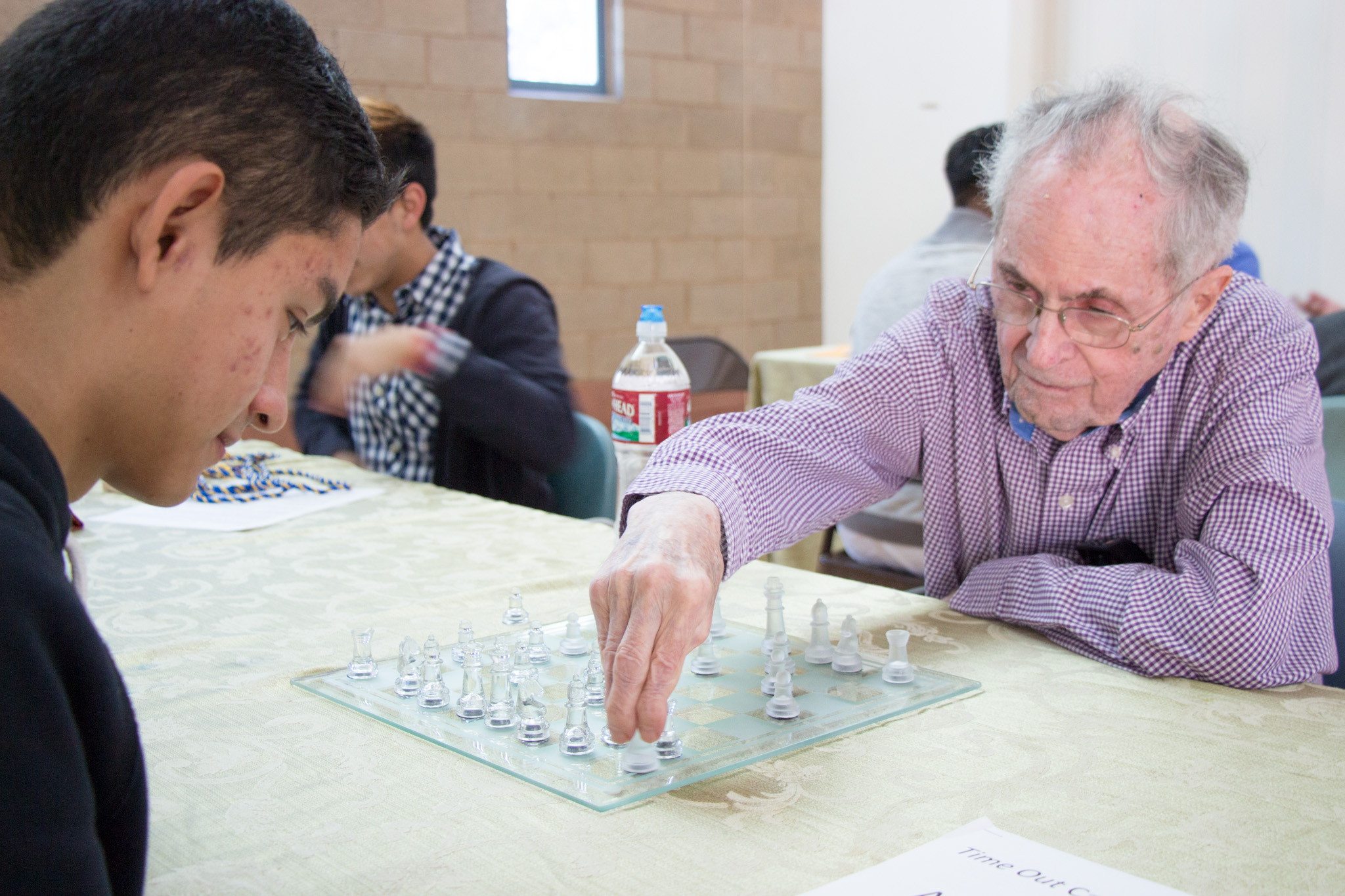 The original version of the photo caption accompanying this article contained multiple errors and has been changed. See the bottom of the article for more information.

Benjamin Nguyen greeted Irwin Rosentein with a smile and a pat on the back. Like old friends, they sat down at a table and started talking about their day.

As they caught up on each other’s lives, the 56-year age difference between them disappeared.

Rosentein and Nguyen, who graduated in the spring with a degree in anthropology, met each other through TimeOut @ UCLA, a program that recruits students to provide companionship for individuals with Alzheimer’s and other forms of dementia, while providing respite care for their caregivers. The program recently finished its first academic year and plans to return this fall.

“Constant companionship for someone can be extremely exhausting,” said Jessica Jew, project manager of the TimeOut program, which officially began in spring. “We want to give caregivers a break as well as form beneficial relationships between seniors and students.”

The program aims to teach the students the effects of aging and certain neurological diseases and give students an opportunity to learn about someone else’s life, Jew said.

“It’s a beautiful opportunity to learn from people that have so much life experience,” Jew said. “These are some of the last opportunities to hear those stories you see in history books firsthand from those who lived it.”

Students in the group take the bus or drive every Monday and Wednesday to the Optimistic People In a Caring Atmosphere, or OPICA, health center, located about three miles from campus.

While the sound of children playing on the jungle gym outside drifted into the center on one Wednesday afternoon, senior citizens gathered from different areas of L.A. to talk with college students at OPICA for several hours.

Students connect not only with patients with various forms of dementia, but also with their caregivers through the TimeOut program.

Carol Rosentein is the wife and full-time caregiver for Irwin. After her husband was diagnosed with Parkinson’s disease, she said she was constantly challenged with taking care of someone who could no longer carry out daily tasks.

“It’s been a downward spiral for the past eight years on the road of a disease that has no cure,” Carol Rosentein said.

She said that the second time her husband attended a TimeOut session, he told her he had to stay well because he felt he needed to give back to the students.

“The disease stops everything in its tracks, but it’s all about hope,” Carol Rosentein said, her eyes lighting up behind her red-rimmed glasses. “He reestablished his self-worth and identity. Now I can go take care of me.”

The Rosenteins were two of the first participants of the TimeOut program. The couple now wants to help expand the program by integrating music therapy.

Nguyen has known Irwin Rosentein for more than six months and said he has seen the bright persona he takes on when playing the piano. He tries to visit Rosentein at home for three hours every Thursday.

“When you’re at their home, they get to bring out memorabilia and make the experience more meaningful,” he said.

Nguyen added that he plans to pursue geriatrics social work, after his interactions with older adults and passion for one-on-one therapy strengthened through the TimeOut program.

While Nguyen and Rosenstein talked at a table on a Wednesday afternoon, other students sparked conversations with different seniors.

Growing up, Yoon’s grandparents took on parenting roles for him since his parents were out of the country. He joined the program at its inception and plans to continue volunteering because he said he has always enjoyed interacting with seniors.

As a pre-med student, Yoon said he finds a great mentor and friend in Dr. Kleeman.

“It’s amazing how much energy and enthusiasm he still has for medicine, even with his condition,” he said. “I want to be as passionate of a physician as he is.”

At the age of 91, Kleeman has an early stage of Alzheimer’s disease, which causes problems in memory and interactions with others.

Yoon said he talks to Kleeman frequently, draws diagrams and takes notes to help the former professor remember their past conversations.

“He’s a great mentor. We connected over our interest in medicine, and he’s given me advice on medical school and what it means to be a doctor,” Yoon said. “We also like to talk about our different backgrounds and politics.”

As the last TimeOut meeting for this quarter proceeded, Nguyen began taking pictures to commemorate the friendships made through the program.

He said working with the seniors gave him a new perspective about life and the challenges he would face after graduation.

“(These are things) I wouldn’t learn in school,” Nguyen said. “At the same time, older adults get cognitively stimulated and learn to live life again. They live vicariously through the younger person.”