Four men shot at by DHS officer, arrested for assault at rally 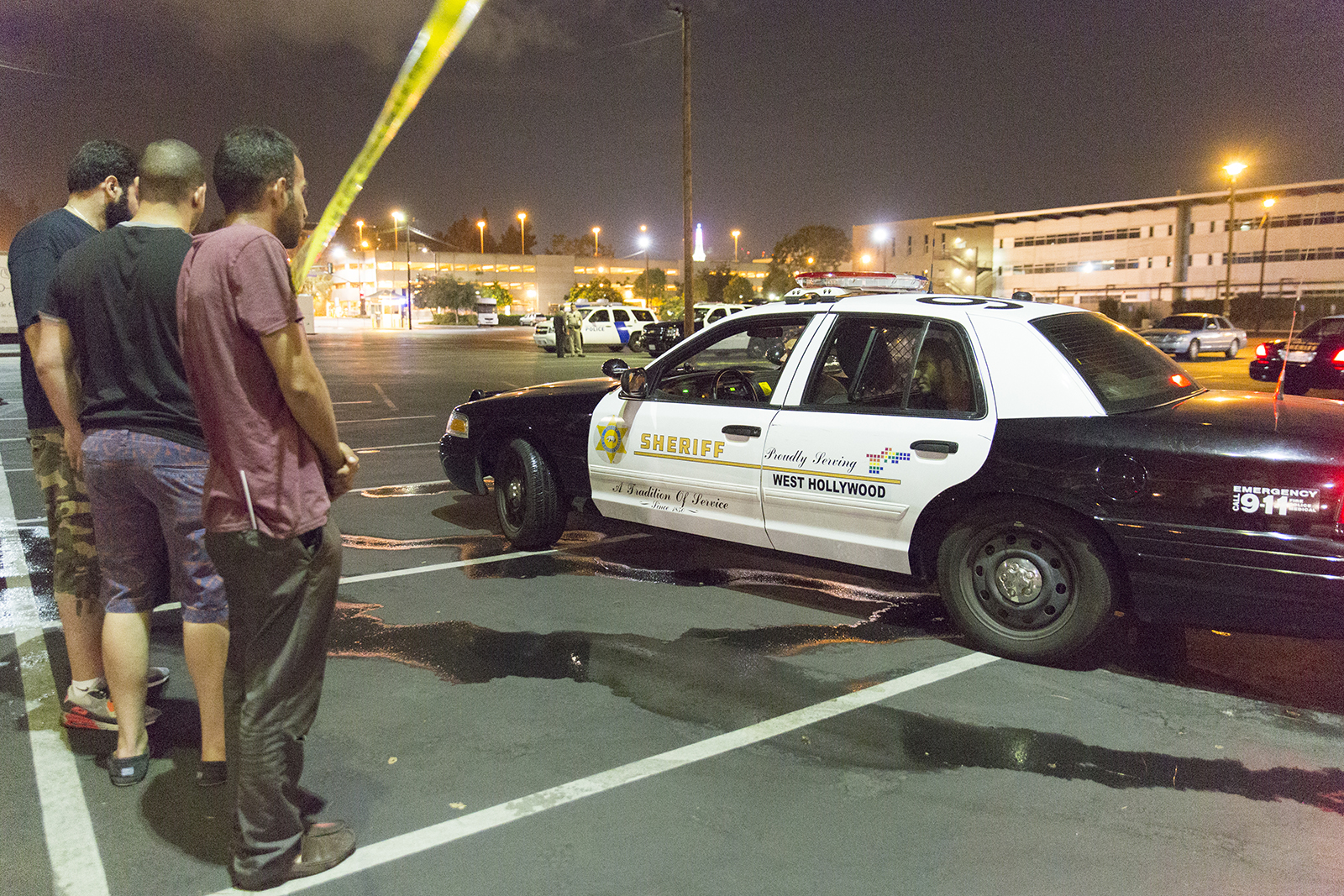 UCLA Lot 36 was closed down for a few hours on Sunday evening as a Department of Homeland Security officer fired a gun during a pro-Israel protest. (Jose Ubeda/Daily Bruin senior staff)

A Department of Homeland Security officer fired a shot at pro-Palestinian counter-protesters in a truck during a pro-Israel rally in Westwood early Sunday evening. Four men in the vehicle were later arrested.

“As the protest was winding down, there was a confrontation from two vehicles, opposing sides, if you will,” Nash said. “During this confrontation, which evolved into a physical altercation, a (Department of Homeland Security) officer observed it and tried to stop the conflict from going on, during which time an officer-involved shooting occurred.”

Officials said they received no reports of injuries and that nobody was hurt. The Sheriff’s Department is investigating the incident with assistance from the Federal Bureau of Investigation.

The four men were later released from custody after each posting $30,000 bail, according to Sheriff’s Department records.

Nash said investigators have a video of the incident, and are looking into using surveillance footage, possibly including some from the Federal Building.

In a statement about the incident, Steve Shampine, a private security guard hired to assist during the protest, said the men in the truck waved Palestinian flags and screamed obscenities at those at the rally.

“The men got out of (the) truck with sticks and (a) tire iron,” he said. “I placed myself between the argument telling them all to calm down and move back.”

He said that one of his partners joined him and was almost hit by the tire iron.

“A Homeland Security agent came running in to help us, and the men threw something at him. He drew his gun and shouted for them to stop. They jumped in and started to drive away recklessly. The agent then fired a shot, right next to me, into the back of the truck,” he said.

A man who attended the pro-Israel rally and requested anonymity for safety reasons said his friend’s father, also attending the rally, was hit by a flagpole one of the men was holding out of their truck.

“This guy hit my friend’s father with the stick, and then they jumped in the car and drove away,” he said. “A block later, the (police) pulled over the Arabs and they arrested them.”

He said the men continued to be hostile toward the rally participants.

“Another guy jumped out of the car, and started hitting a security guard, plus another guy (was there) with a crowbar,” the man said. “ I don’t think he (actually) hit anybody with a crowbar. He just had one, which is weird.”

Jacob Finn, a third-year psychology student who attended the pro-Israel rally, said he saw the men in the truck stick the end of their flagpoles into the driver’s window of the sedan next to them.

“(The driver) must have said something out of the other car, and the Palestinian protesters in the truck had hopped out,” Finn said. “The men had their Palestinian flag, and were kind of jabbing into the window of the woman’s car.”

Then, he said, the DHS officer shot at the truck.

“At first what everyone thought was that someone shot off a firework,” Finn said.

He said LAPD officers on motorcycles then pulled the truck to the side of the road.

Hany Refai, 32, said he was also in the truck, but left before the Homeland Security officer shot at it.

“As soon as we got off the freeway, we saw the people with the Israeli flag, and they started accosting us, and they had the ‘Your God is dead,’ and this, and that,” said Refai, who is from Jordan.

Refai said he started wagging his finger at the pro-Israel ralliers.

He said a BMW tried to cut him off on Wilshire Boulevard, and some people on the street took the Palestinian flag from his friend’s hand, leaving him holding the flagpole.

Several news agencies reported that the men in the truck were wielding a stick, which Refai said was actually the flagpole.

He said that protesters then put the Palestinian flag on the ground and started stomping on it. Refai said he reached for the flag, and protesters started beating him, causing a deep cut on his knee.

Refai then ran through the street to the pro-Palestine counter-protest and saw the officer shoot at his friends in the truck.

He said he was shocked to hear his friends were under arrest when they had been shot at and had their flag stolen. He added that his friends had not eaten all day because it is the month of Ramadan.

Daniel Reiss, a Los Angeles lawyer who attended the pro-Israel rally, said he thinks the protesters were mostly well-behaved, and that most of the belligerence during the rally came from people driving by in cars.

He added that the men were not from Los Angeles, and he thinks they may have driven to the protest to “cause problems.”

A video of the incident was posted on YouTube Sunday afternoon.

Part of Wilshire Boulevard was closed late Sunday evening as the investigation continued. Most of Lot 36 near the UCLA campus was also closed off as a crime scene, and officers pulled the truck over to the side of the road for the investigation.

The DHS agent who shot at the men is on administrative leave, and his weapon was confiscated, according to a Los Angeles Times report.

The men will appear in court on Tuesday at 8:30 a.m. at the Los Angeles Superior Court Airport Courthouse.