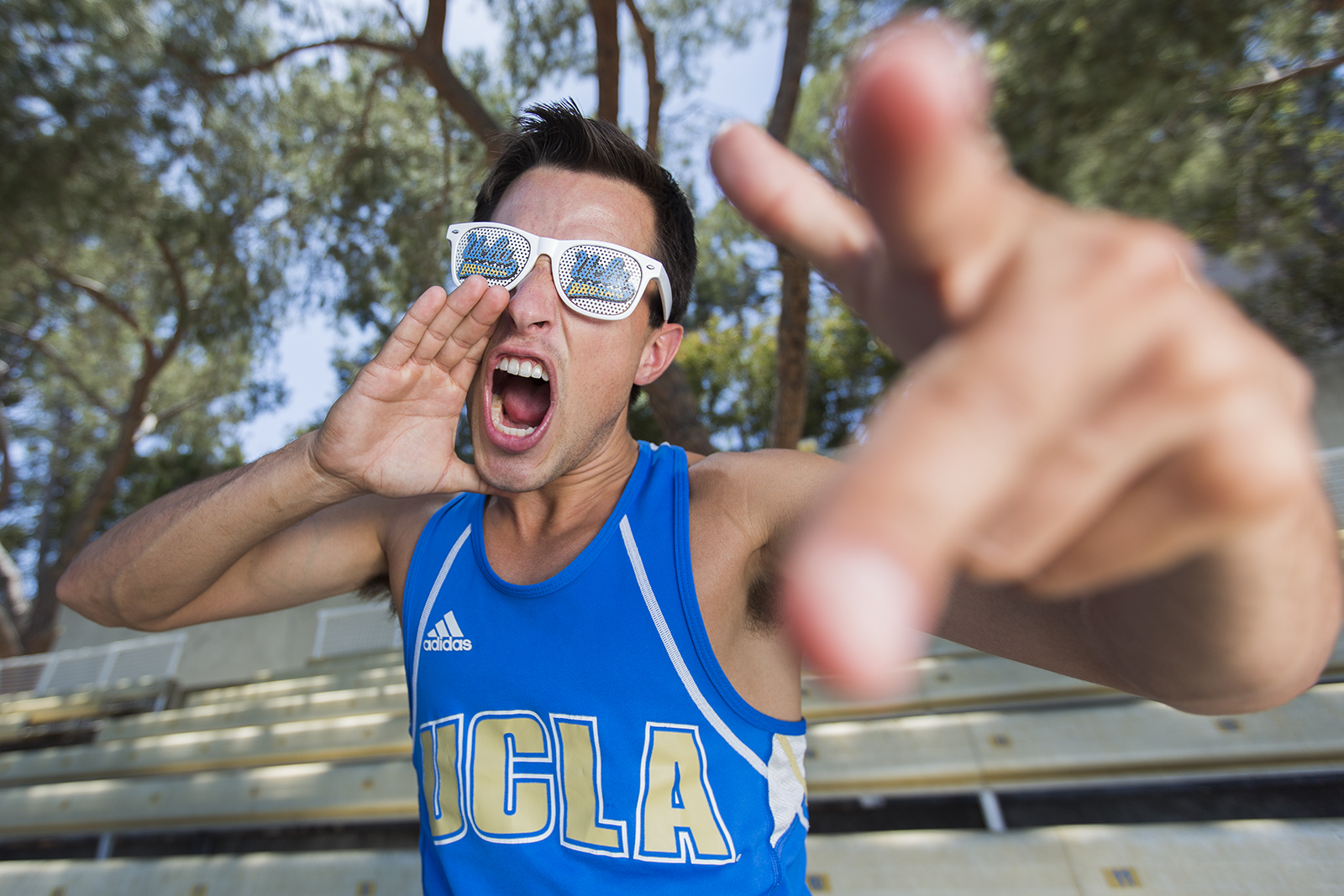 Fifth-year distance runner Zack Torres doubles as a skilled heckler at most UCLA home games. Torres is a vocal leader as a member of his team in addition to using his words to get in the heads of Bruin opponents.
(Austin Yu/Daily Bruin senior staff)

“How do you want to be remembered?”

Zack Torres repeated these seven words to himself throughout an improbable cross country season that saw him fight his way back from multiple injuries to run in UCLA’s top seven at November’s Pac-12 championships.

While the fifth-year distance runner boasts an impressive athletic resume, he will be remembered most for his character – that of a leader for UCLA cross country as well as one of the most spirited fans to grace the stands at Bruin home games.

As captain of the cross country team, Torres knows a thing or two about being vocal in order to motivate his teammates. As the infamous, school-renowned “heckler,” Torres knows how to use his words to spur on other Bruins while getting in their opponents’ heads.

The cheers and chants employed by Torres throughout the games he attends are far from coincidental – they’re crafted. Interviewing members of a given team, researching and Facebook stalking provides Torres with inside information on opponents, allowing him to specifically tailor taunts sure to play on the opposition’s weaknesses.

“The best is when you give a heckle, or a chant, or a cheer, and everyone has just a little bit of a smiling cringe,” Torres said. “That way you know you didn’t cross the line, but you tiptoed on it.”

Despite his 5-foot-5-inch frame, Torres is hard to miss. Whether he’s decked out in bright blue shorts, body paint and UCLA sunglasses or casually sitting in the stands in jeans and a UCLA shirt, his uniquely high-pitched voice easily reverberates throughout the home court.

Torres was instrumental in providing energy for the men’s volleyball team, with its estimated 100-person attendance at home games having the potential to make the approximate 13,800 capacity Pauley Pavilion feel empty.

“At one point he yelled at the server on another team that he had the body structure of a Teletubby,” said redshirt sophomore middle blocker Trent Kersten. “It just made everyone laugh so hard and it was really lighthearted. It just shows how funny he can be, what good fun his heckling is, and for him to be leading the student section of what little there was, he just still made it fun.”

Torres makes sure his voice is heard at every game, because he believes that home-court advantage means nothing if the crowd isn’t openly invested in its team. He prides himself on having mastered the “lost art” of heckling.

“You don’t want the home court advantage if it’s quiet. If your fans just clap, that doesn’t give an experience,” Torres said. “You want the crazy kids coming to the game and being loud. If you can go there as a group of fans, (you can) make a difference in the outcome of the game.”

Torres is supportive of athletes from all programs, whether he’s in the stands, on the track or on campus. The phone numbers of students from each and every UCLA team are stored on his phone, because he has made a concerted effort to reach out to every athlete possible and offer his support.

“It’s very hard to find people who think the way we think. There’s a camaraderie of being an athlete. That’s part of the reason I chose UCLA; the camaraderie within the athletic teams was great,” Torres said. “Right when I got here, I wanted to make it even closer. I’ve got friends in every sport, because I feel like we all get each other as athletes.”

Torres devotes himself to this idea of fellowship between teams and team members, whether it’s volunteering to host recruits, providing advice or attending water polo matches, which he admits he struggles to understand.

Despite his demanding schedule and personal athletic training, Torres makes time for his peers.

“He doesn’t just care about his own personal success. He’s not a greedy athlete who’s in it just for himself,” said Forest Braden, assistant track and field long distance coach. “That’s what you want to see from an athlete – that heart. You can tell he cares; he wears his heart on his sleeve.”

Torres’ emotions were particularly evident during his final cross country season this fall. After injuries to his femur and ensuing damage to his tibia forced him into a year and a half of rehab, retirement looked inevitable for Torres. He began contemplating a role as team manager so that he could remain involved with his team.

Being sidelined crushed Torres, who was used to success after being a high school standout recruited to UCLA in the top 10 of his class.

Having been made captain, Torres travelled with the team to its first meet of the season as an honorary reserve. The night before the race, coach Mike Maynard called Torres and asked him to fill in for an injured runner. The senior prepared himself to make the most of his last opportunity to don his UCLA uniform.

While Torres’ goal was to somehow keep up with at least one runner on his team, he managed to place seventh in team order for the Bruins, stunning both his teammates and coaches.

Torres’ unexpected season performance culminated at the Pac-12 championships, where he placed sixth. In third for the team with half a mile to go, Torres motivated each teammate he passed, slapping them on the back and yelling, bringing them with him to the finish line, all the while repeating his mantra: “How do you want to be remembered?”

Being a team player is embedded in Torres’ psyche, and he applies this mindset to all aspects of his life and leadership. While other Bruins may compete in different arenas, Torres still views them as teammates.

“You don’t forget a guy like Zack – he doesn’t just come and go,” Braden said.

Torres will be remembered by his teammates, coaches and peers not just as a comeback kid, not just as a heckler, but as a Bruin who refused to be defined by adversity.