Students give back to Westwood during fifth annual WOMP 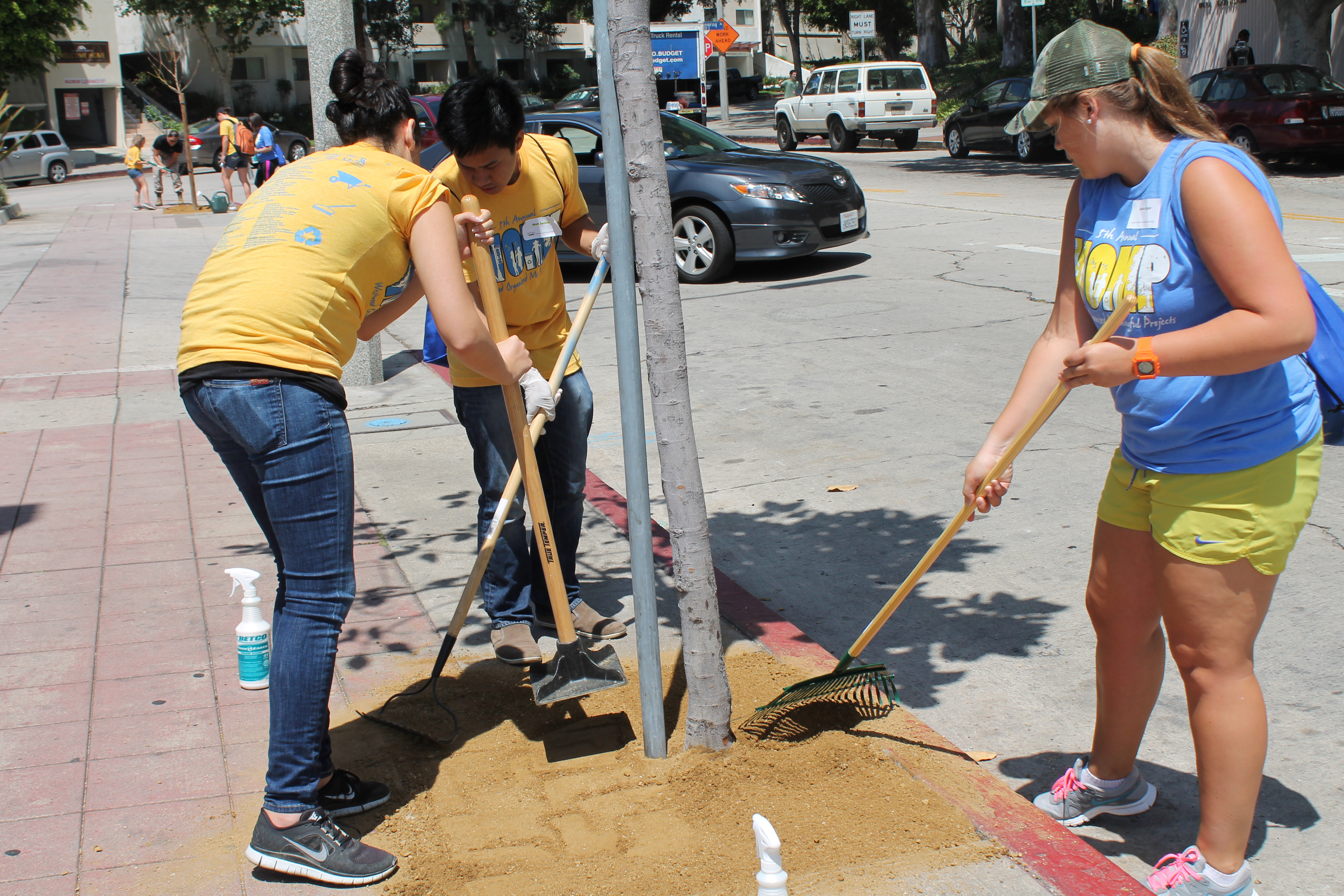 Standing on a ladder stationed close to the curb, Gunhee Han carefully painted one of the 1930s era metal lampposts in Westwood Village with a fresh coat of paint.

Covering the mottled lamppost with a layer of green, the second-year business economics student and president of United Korean Voice, worked with other group members to spruce up the area at the fifth annual Westwood Organized Meaningful Projects on Saturday.

WOMP is a volunteering event where UCLA students and Westwood residents collaborate to complete safety and beautification projects to improve Westwood. The event, which previously only covered the North Village and Westwood Village, stretched south of Wilshire Boulevard this year.

Armen Hadjimanoukian, the student chair of WOMP and a third-year economics and international development studies student, said organizers decided to add the south of Wilshire locations to connect students with the greater Westwood community.

“By having some of our students go (to Westwood), it creates a little bit more of a stake and pride in our community,” he said.

Approximately 300 people came to the event, a slight decline from last year, said Steve Sann, co-chair of WOMP. Sann said he thinks one possible reason for the drop in attendance was that this WOMP took place later in the quarter than it has in previous years, making it conflict with some students’ finals schedules.

On Saturday, volunteers sorted books for a used book sale next week at the Westwood Public Library on Glendon Avenue and cleaned the playground at the Westwood Park, just past the Federal Building.

WOMP also kept up some of its traditional activities this year, such as filling in tree wells around the Village with decomposed granite.

Some student volunteers said they think WOMP broadened their knowledge of Westwood.

Lauren Fravor, a third-year physiological science student, said she participated in WOMP because volunteering is something she has done consistently since high school.

She and other members of her sorority, Alpha Chi Omega, alphabetized thousands of books for the Westwood Public Library’s upcoming book sale at the event.

She said she enjoyed seeing the final product of the work she completed Saturday, which is not always possible in other community service activities such as fundraising.

One of the last events of the day featured two different a cappella performances by Medleys and Resonance A Cappella. The groups performed in different senior living centers in Westwood.

Deepak Rama, a recent UCLA alumnus, said he attended WOMP because he wanted to focus more on his community after having spent so much time on school during the year.

At the event, Rama stood on a ladder in front of the Westwood Recreation Center, cleaning the dusty windows.

“What am I doing, just research?” he said. “I need to give something (tangible) back to the community.”