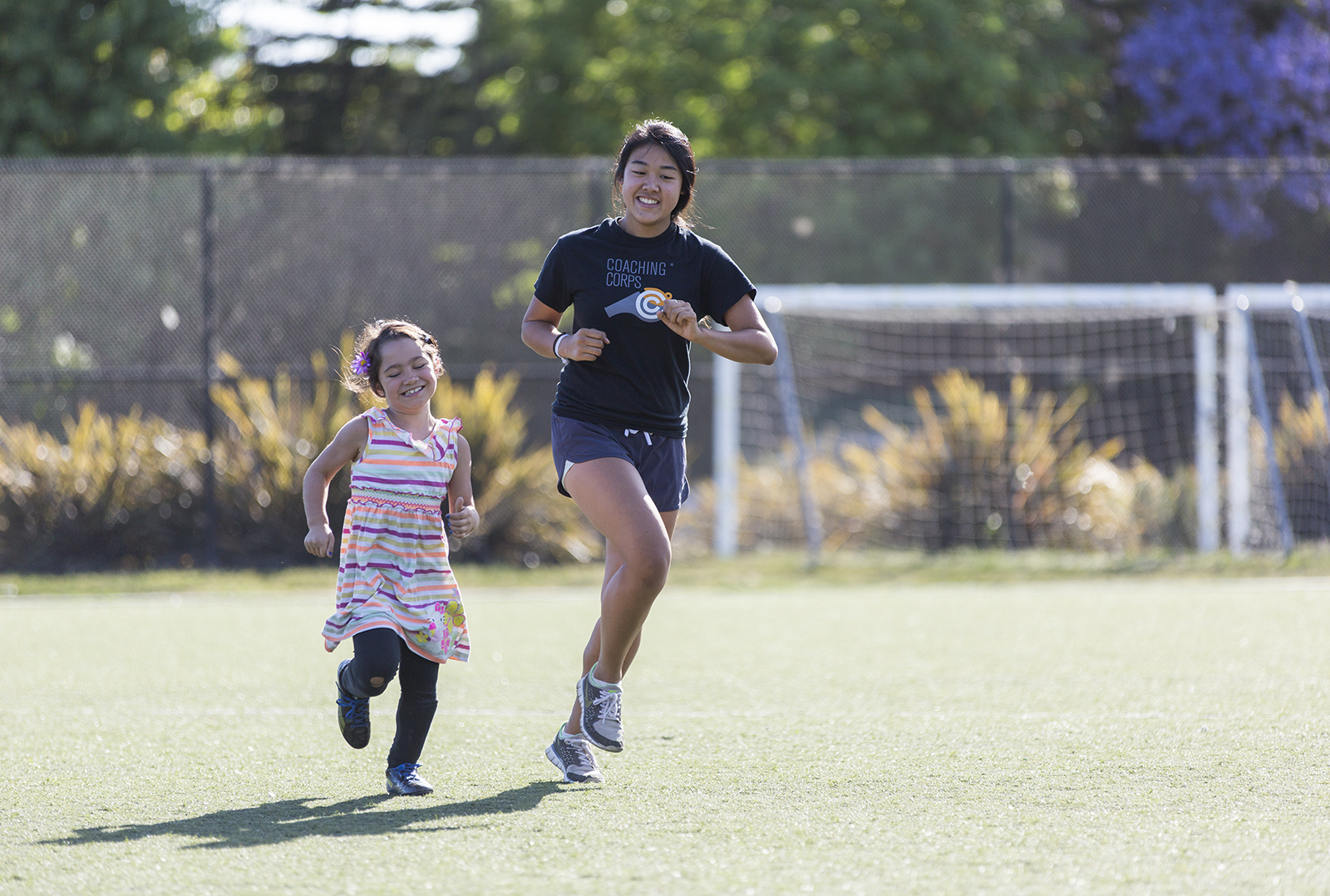 Second-year environmental science student Erika Kidera jogs along with one of the girls she coaches through Coaching Corps, an organization that sends volunteer coaches to recreational leagues in need of more coaches. (Austin Yu/Daily Bruin)

As the seconds ticked by, the parents on the sideline began pacing back and forth as their daughters held onto a one-goal lead late in the soccer game.

The pacing gradually turned into jumping and screaming, but amid all that, the two coaches stayed cool.

After each time their team narrowly avoided allowing the goal that would have tied up the game, Kevin Robinson, a third-year psychobiology student, and Erika Kidera, a second-year environmental science student, could only let out a nervous laugh.

Robinson and Kidera are used to being the ones on the soccer field, having played soccer for most of their lives. Through Coaching Corps, a club that sends UCLA students as volunteer coaches to underfunded inner-city programs, they found their way right back onto the field.

This quarter, their team’s season is winding down to the last couple of games. Before this game, the team hadn’t won all season. It’s been this close before but has never been able to close out the game.

“The weekend before, the kids were really getting down because they were really close, but just couldn’t pull out that last goal,” Kidera said. “They were at practice going, ‘Oh, we were so close, but we didn’t win. I don’t think we’re ever going to win.'”

Currently, Robinson and Kidera coach a team of girls from ages 6 to 8. With such a young age group, it sometimes takes an unusually large amount of patience to control the team. But this is the third group of kids Robinson and Kidera have coached together over the last year, so they already have some experience under their belts.

“You come in and you have all these great ideas for soccer drills,” Robinson said. “And you get there and realize that half your effort is going to be spent controlling them, getting them to appreciate and respect you because it takes establishing that position of respect to actually get them to listen to you.”

From this group of girls, Robinson and Kidera have certainly earned that level of respect. As rowdy as the girls can be, getting their attention and getting them to do what the coaches ask for doesn’t take too long.

When there are squabbles on the field because a girl knocked the ball away from another girl or when the team morale is low because of all the losses, the two coaches make sure to address the issue right away.

During practices and games, the parents keep their distance, trusting the coaches to teach their young girls.

“I think parents naturally have a protection instinct, so they really quickly get reads on people who are around their children,” said Matt Boatright-Simon, a parent of one of the players. “All these parents are hanging back. There’s trust there, and it’s a beautiful thing. It really is.”

Robinson and Kidera realized early on that for such young girls, it’s not really about teaching drills and skills – it’s about building up the fundamentals. What’s even more important is ensuring that the girls are actually having fun.

Soccer has been a huge part of both Robinson’s and Kidera’s lives. Both started playing when they were around the ages of the girls they now coach and kept playing through high school. Now, they just hope to give the girls an opportunity to discover the same passion they’ve had for soccer.

As the game clock trickled down to zeros and the referee blew his whistle to end the game, everyone – from the team’s players, to their parents and to the two proud coaches – exploded in cheers.

At that moment, the girls were finally rewarded for a season of hard work and growth.

All the parents ran onto the field and formed a victory tunnel with their arms, a tradition they do after every game, win or lose. The girls and the coaches ran through it laughing, smiling and high-fiving each other among the cheers of the parents.

When they came out from the other end of the tunnel, the girls couldn’t resist running through it just a couple more times, and neither could the coaches.