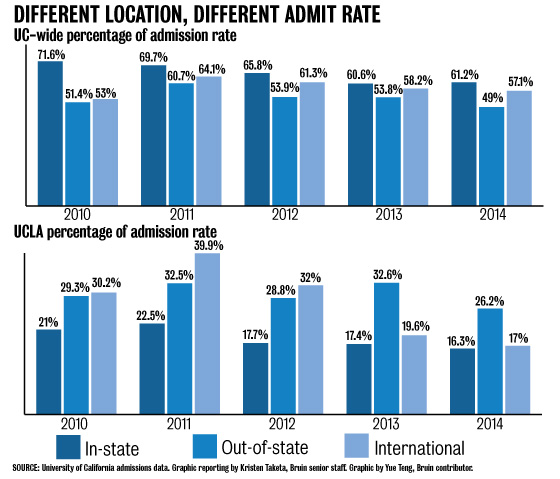 California applicants this year had a smaller chance of receiving an acceptance letter to UCLA than nonresident applicants – a growing trend for at least the past six years.

About 16 percent of California students who applied got into UCLA, compared to 26.2 percent of out-of-state students and 17 percent of international students, according to preliminary admissions data released by the University of California Office of the President earlier this month.

Applicants from outside of California made up roughly 42 percent of the admits to UCLA this year, indicating a steady yet significant increase from past years.

UCLA accepts out-of-state students at a higher rate because fewer of them actually accept the offer to UCLA, said Youlonda Copeland-Morgan, vice chancellor for enrollment at UCLA.

The further students live away from UCLA, the less likely they are to accept the admission offer, Copeland-Morgan said. She said nonresidents are less likely to accept the offer because they would pay extra tuition and have other options closer to their home.

The UC system needs the higher nonresident tuition to help supplement the education for California students. Currently, there are 6,000 California student in the system who do not receive any state subsidies, said Dianne Klein, a UC spokeswoman.

“It’s not the capacity problem,” Klein said. “We have the capacity to educate more students but it’s the funding problem.”

Copeland-Morgan said the UC’s compare favorably policy, which requires that nonresident admits have a qualification equal to or better than California students, means nonresident admits are not less qualified than in-state admits.

Although out-of-state students had a higher admission rate than in-state students, the same was not the case for international students.

In the past, international students tended to have a better chance of getting into UCLA than out-of-state students.

In the past few years, the admissions rate for international students has steadily decreased to its current rate of 17 percent.

Out-of-state student admissions have been more difficult to track and predict because they only recently became a prominent part of UCLA admissions, Copeland-Morgan said.

“It’s harder to take a trip to all 50 states,” Copeland-Morgan said. “Going to Beijing is a lot easier than going to North Dakota, Texas, Florida, etc.”

UCLA is in the process of expanding its efforts to recruit within the United States, she said.

The trend is not new. On every UC campus, out-of-state students have a higher admission rate than international students.

Klein said she does not know the reason for the trend, saying each campus makes its own enrollment decisions.

International students have been applying to more UC campuses than in the past as well, which may explain the result.

The number of UC campuses applied to by the average international student jumped by more than 20 percent over the last five years, while the number remained stagnant for in-state and out-of-state students.

Klein said having more nonresidents in the system does not mean California students are replaced.

Johnson said doing so will require a great effort from California policymakers.

“The Master Plan (for Higher Education) hasn’t changed in 50 years, but the economy has changed a lot, demanding a lot of educated people in the workforce,” Johnson said. “We’ve seen the increase in the capability of high school students.”

Copeland-Morgan said she cannot predict the enrollment numbers in the future, but she expects a continuing demand for UCLA.