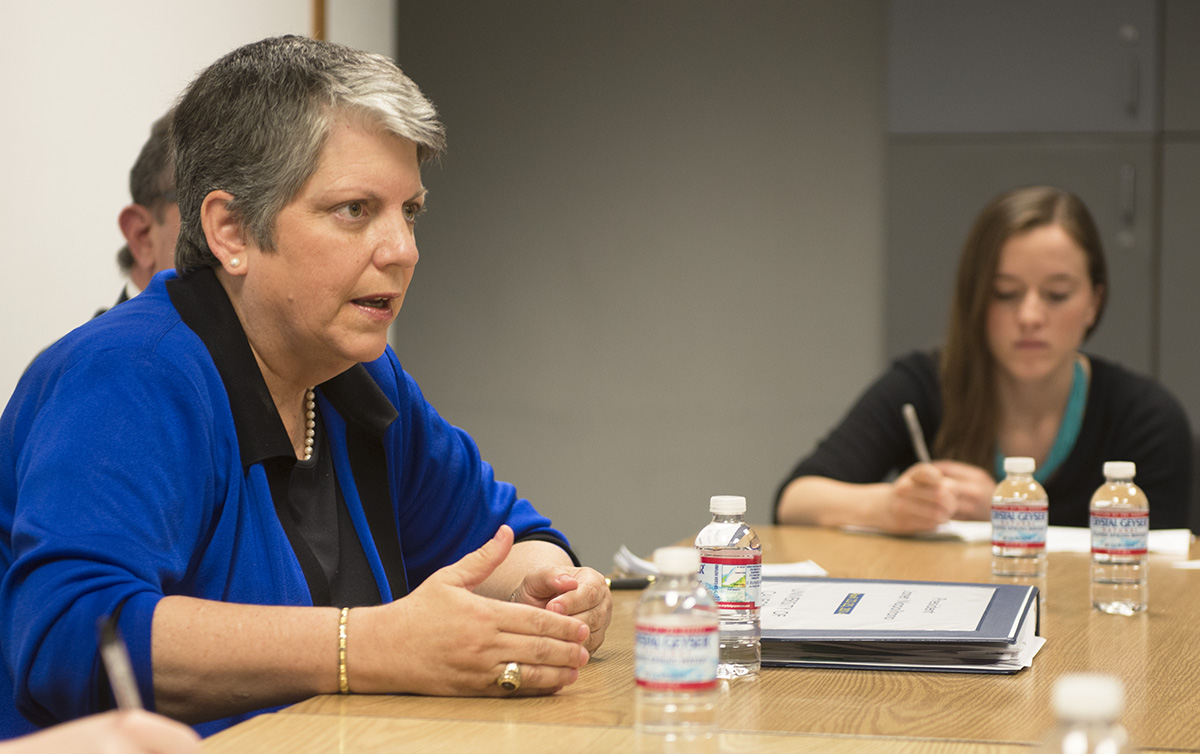 Janet Napolitano spoke with the Daily Bruin Editorial Board on Friday and promised to not raise tuition next year. She also discussed matters relating to divestment and the UC campus climate survey. (Brandon Choe/Daily Bruin senior staff)

In an interview on Friday with the Daily Bruin’s editorial board, University of California President Janet Napolitano said she will not raise tuition next year even if the state doesn’t give all the funds the UC is asking for.

Napolitano also gave her take on other current issues like divestment, affirmative action and the UC’s recent campus climate survey.

As the UC Board of Regents waits for Gov. Jerry Brown to release his “May Revise,” the revised budget proposal for the state, Napolitano said she has heard support from legislators and that there is “a lot of fondness” for the UC.

She warned that she expects the governor will be cautious in giving more state funding this year, since he will want to avoid saddling his successor with a deficit.

Napolitano said she would still work not to increase tuition even if the state doesn’t grant the extra $120.9 million the UC is asking for. In Brown’s proposed budget released in January, he only gave a 5 percent or $142 million increase to the UC, less than what the UC Board of Regents requested.

“We will keep tuition flat next year, even if we get a 5 percent increase,” she said.

In the meantime, Napolitano said, the University is turning its attention toward private sources of revenue to alleviate the UC’s budget issue. She said the UC is focusing on tapping into alumni resources for philanthropic support and creating more partnerships with the private industry, such as through technology transfer, a process in which UC scholars partner with private enterprises to patent products from their research and generate commercial profits.

She added that while doing so, it is important not to privatize the University and to avoid conflicts of interest.

When asked for her thoughts on the recent student-driven divestment movement, Napolitano deferred to UC policy, which states that the University will only divest from a foreign government if the U.S. finds it is committing acts of genocide. Many students have been calling for the UC’s divestment from companies that do business with Israel, an issue that has been explosive and controversial among students in recent months.

“Using divestment as a tool is something that should be done rarely, if at all. I don’t think it’s called for at all here,” Napolitano said. “Nothing precludes (students) from speaking or writing (about divestment) … and they should. Divestment, however, is a different ball of wax.”

When asked about Senate Constitutional Amendment 5, a failed state measure that would have allowed California colleges to consider race in university admissions, Napolitano criticized the recent Supreme Court decision that upheld Michigan’s voter-approved ban on affirmative action. She did not state explicit support for SCA 5, but mentioned a submission to the Washington Post that published Friday. She argued in the article for more diversity on campuses and said diversity decreased in the UC after California voters passed the state’s own affirmative action ban.

Napolitano said she is working particularly on improving diversity through the enrollment of more transfer students, since less than a third of all California community colleges currently supply transfer students to the UC. A report will be released at the next UC Board of Regents meeting that shows how the state’s three higher education systems are working to increase transfers to four-year state universities, Napolitano said.

When asked about the UC’s recent systemwide campus climate survey, Napolitano said she doesn’t think the survey was entirely effective because it only solicited the thoughts of people who decided to participate in it.

She said she doesn’t think there could be such yearly reports since the survey was expensive and time-consuming, but she said the University will check in with campuses and chancellors regularly about campus climate efforts.

On Friday, Napolitano explained the reasons for her efforts to reach contract agreements with many of the UC’s unions. If unions threaten to go on strike more than once, it is difficult for the University to focus on other issues like finding alternative sources of revenue and alleviating big growing costs like its unfunded pension system.

“The University needs some stable peace here,” Napolitano said. “It’s difficult to do that if you’ve got unions threatening to go on strike.”

The Daily Bruin’s editorial board also asked Napolitano for her response to researchers, students and others who oppose the UC’s plan to discontinue all University funding to its oldest observatory, Lick Observatory, by 2018. It has been the long-term plan to terminate funding to Lick, Napolitano said, but she added that there is no plan to shut down the observatory.

She said the UC Office of the President doesn’t have the budget to keep it funded and she wishes the people wanting to keep Lick open would help look for revenue sources.

Correction: Napolitano said she believes Gov. Brown will be careful in allocating state funds this year because he wants to avoid ending his term with a deficit.