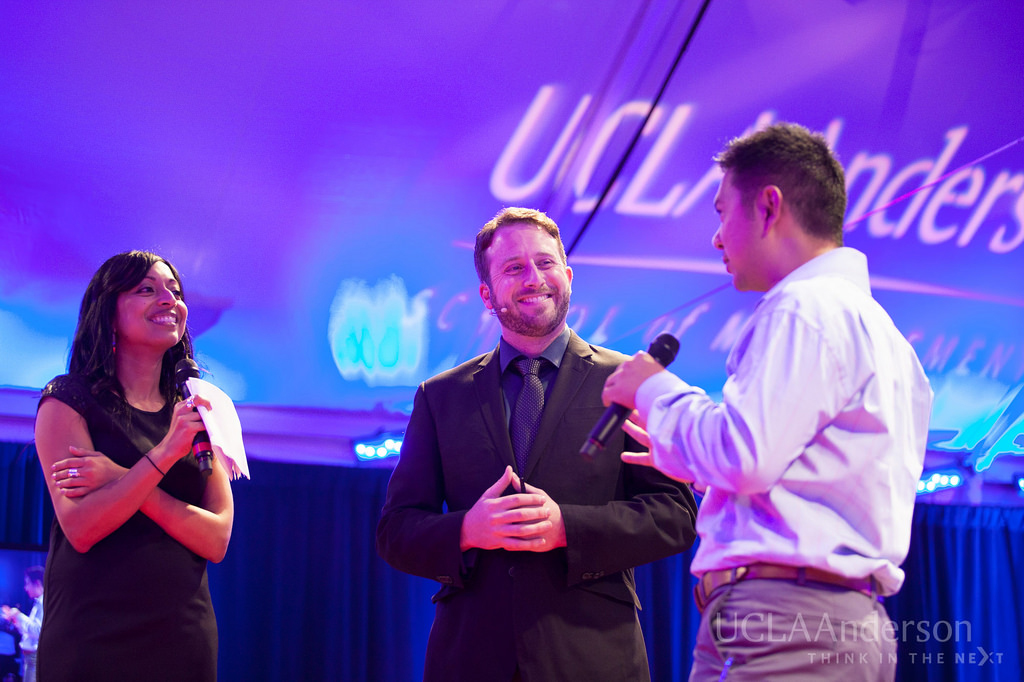 Ryan Gutterson (center), a second-year student at the UCLA Anderson School of Management, is one of the student speakers at the third annual TED Talk at UCLA. (Courtesy of TEDanderson)

Students spoke to their peers about the power of a Grey’s Anatomy episode and how schoolyard timeouts can hurt skill development for children, as part of the UCLA Anderson School of Management’s annual TED Talks.

A TED Talk committee selected Alexa Binns, Reza Banki and Ryan Gutterson, all second-year Anderson students, to speak. The three students gave talks on issues related to entertainment, criminal justice and child development. At the event, Banki asked that his talk not be recorded, so The Bruin chose not to include his story in this article.

Alexa Binns has experienced firsthand the power of entertainment to inform the public about health issues.

Stories in movies and television programs about health issues improved her own life, after she was diagnosed with an environmental illness related to pesticides sprayed on her home.

For her talk, Binns talked about how a Grey’s Anatomy episode about a pregnant mother with HIV, the MTV reality show “16 and Pregnant” and the movie “Erin Brockovich” changed public perception on certain issues.

“Erin Brockovich,” a movie which brought environmental illness into public discourse, has a personal connection to her. The movie tells the true story of a woman who found a link between health complaints in a small town and groundwater contamination.

When Binns was 11 years old, she got very sick, aching all over and having little energy, she said. Eventually, her family figured out that her symptoms were worse when they sprayed their house with pesticides.

However, because environmental illnesses were uncommon and poorly understood, they were difficult to explain before the movie “Erin Brockovich.” Once the movie became famous, it helped her feel less alone, she said.

“Once I had experienced firsthand how meaningful a story can be to educate people about an issue they weren’t familiar with before, I was always interested in replicating that for other issues,” she said.

Binns cited evidence that Grey’s Anatomy increased viewers’ knowledge about mothers with HIV. Before viewers watched the Grey’s Anatomy episode, only 15 percent of them knew it was possible for an HIV positive mother to give birth to an HIV-free baby, while afterward the percentage jumped to 61 percent.

She said she hoped the talk would increase the number of people, especially among her peers, who understand the power of combining entertainment and education.

“What you do put on TV needs to be 100 percent entertaining, but it can also be 1 percent educational,” she said.

Ryan Gutterson said he noticed the negative repercussions for children when adult figures in their lives overprotect them during play.

In addition to his personal experience, an article about overprotected children in Atlantic Monthly prompted Gutterson to focus his talk on child development and the positive impact exposure to moderate risks can have on kids’ life skills.

Gutterson said he thinks adult figures overreacting or overprotecting children could be detrimental to their growth.

He opened his talk with an anecdote about working in a school and seeing a teacher bench a boy during recess. When he asked why, the teacher said it was because the boy was running. After an accident in which two girls ran into each other during recess and one dislocated her jaw, running had not been allowed at the school.

He said he thinks mindsets similar to the teacher’s do not help children learn the skills needed to develop an entrepreneurial spirit, such as outside-the-box thinking, which comes from doses of independence.

“They get that (entrepreneurial spirit) by being taught skills and then getting out there and being encouraged to use them,” he said.

He said while parent involvement in their children’s lives is incredibly important, he was concerned about inhibiting kids from being able to do what they are capable of doing.

He said he has great admiration for parents and the pressure they are under in such a crucial role. Still, he said a parents’ instinct to be afraid for their child can be inhibiting.

“To me, that’s the kind of involvement that makes the most sense: teaching, and then backing off a little bit, as opposed to having control and steering your kid toward what you think makes them successful or what you think they need,” he said.

***
After the speakers finished their presentations on Thursday, students got up from their beanbags and chairs, some of them congregating around a large, red TED sign to take pictures.

Audrey Wang, a first-year Anderson student, said she was glad she went to the event because of the variety of information her professors and peers presented.

“Just hearing the different information from other people stretched my mind,” she said.