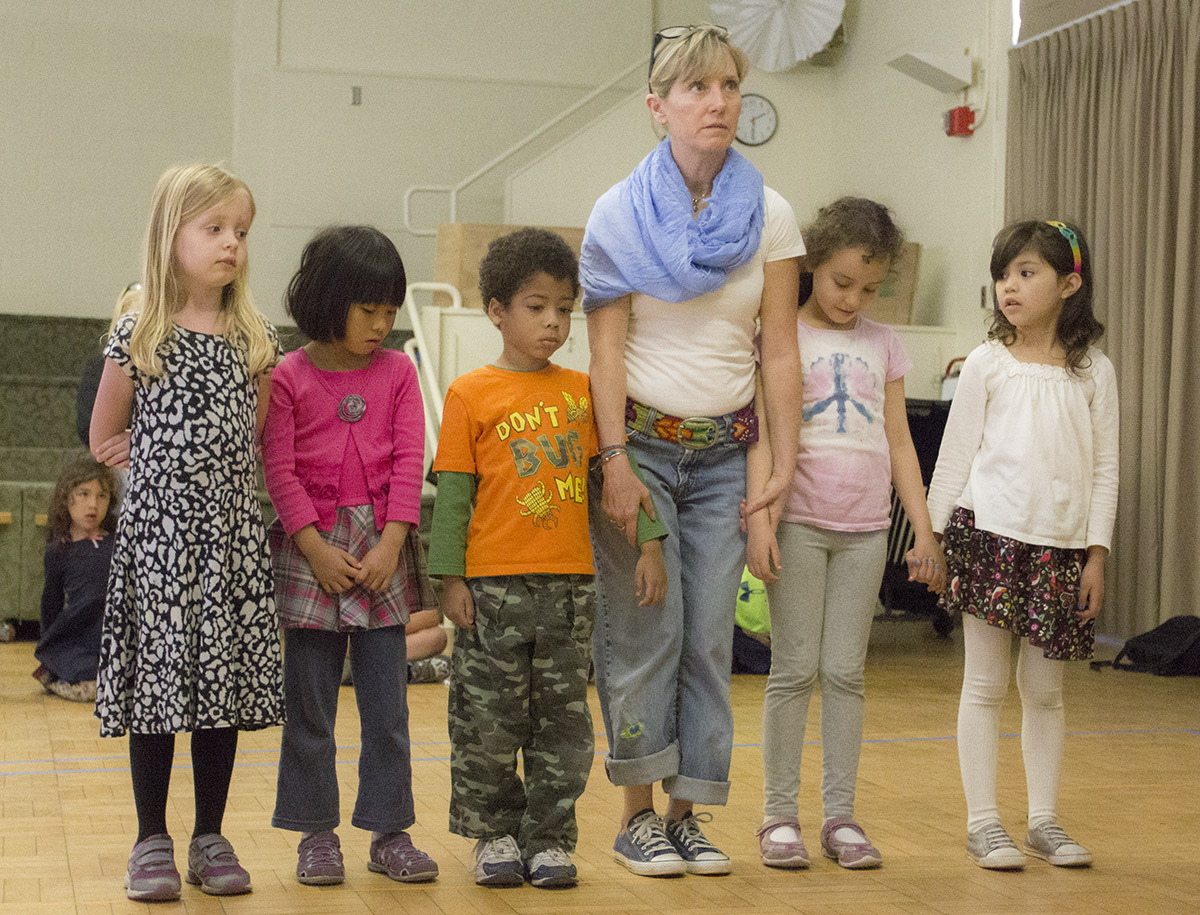 A 5-year-old boy ran, laughing, across the room toward his friends, causing portraits of his classmates’ faces to flash up on the wall. The excited voices of kindergartners quickly filled the room.

Amid cries of “I see me,” Noel Enyedy quieted a class of 22 kindergartners at the UCLA Lab School, a school for children and a laboratory for teachers and researchers, and asked them to think about how their movements affected what appeared on the wall display.

By combining tracking devices with self-expressive images, he and his team of graduate students aim to create a collaborative learning environment in classrooms, said Enyedy, an associate professor of education. Their project, called the Cyber Mural, was tested at the Lab School for the first time last week. The idea originated last year and was funded with $250,000 by the National Science Foundation.

To create the Cyber Mural, three separate components are needed: a software to track movement on the grid, Internet connection to upload the pictures used for the mural and a program that integrates the first two pieces to create the interactive mural.

The combination of these three parts advances technology integration into the classroom to teach kids science.

The interactive mural is projected on a large surface and is artistically altered by certain movements detected by three tracking devices. For example, waving arms up and down could cause trees to appear in an image of an empty park.

The Cyber Mural can be used to teach the cause and effect of relationships in communities and natural environments. The students use a simple graph on the computer to associate different movements, such as jumping or moving the hands, with different actions in the real world, such as taking shorter showers or recycling.

With one sweep of the arms the landscape could gradually turn from a littered, barren environment to one with a healthy, thriving ecosystem. The juxtaposition is meant to teach students about the importance of caring for the natural world.

Enyedy and the other project organizers partnered with Lincoln High School for its first test trial in January of 2013.

One student used the mural to demonstrate how a park could turn out with the right amount of funding and interest, Enyedy said. With his arms by his side there was too little funding, and the park would be unusable and in poor condition. He put his arms above his head to show how too much funding would turn the park into a fancy golf course, only utilized by few. With his arms at the middle, the park was improved and multiple families could use it.

Using technology to create murals encourages students to investigate their own communities and think about relationships, Enyedy said.

From high school students to kindergartners, Enyedy said he wants to use the technology to make an artistic statement. For this to happen, more testing had to be done to debug the system.

“What we’re trying to test today besides the technology is the different types of interaction we can use to make the picture. And whether or not kids can effectively control the mural with these actions,” Enyedy said.

Two classrooms of kindergartners at the UCLA Lab School were instructed to draw self-portraits to use in the mural on a projection of a playground.

When the students walked fast, the happier portraits appeared on the image and the sadder portraits showed up when they walked slowly.

“The concept of the mural is a funky thing for kids to wrap their head around,” Enyedy said. “We want them to get familiar with making a mural before making one in conjunction with science.”

The ultimate goal is to have students come up with plans of their own on how to promote water conservation in the community and eventually use the Cyber Mural to communicate those ideas, Enyedy said.

“Technology is their generation, their life. Bringing these valuable tools into learning will help build conceptual ideas such as conservation,” said Hasmick Cochran, one of the teachers whose classroom interacted with the Cyber Mural.

The plan is to mount three tracking cameras on the walls of a community hall in the Lab School so that the Cyber Mural can be used to teach anytime without having to set up equipment each time, Enyedy said.

From the beginning, the team planned to have the Cyber Mural or a similar device eventually be implemented outdoors in a public setting where many people of all ages could see the results instead of one class.

“The Cyber Mural project began with a vision of public art in public space,” said Fabian Wagmister, a collaborator of the mural project and vice chair of the production/directing program at the UCLA School of Theater, Film and Television.

Enyedy said he hopes to see mural technology help all grade levels not only understand concepts in the classroom, but also creatively express how they can create change in the future.