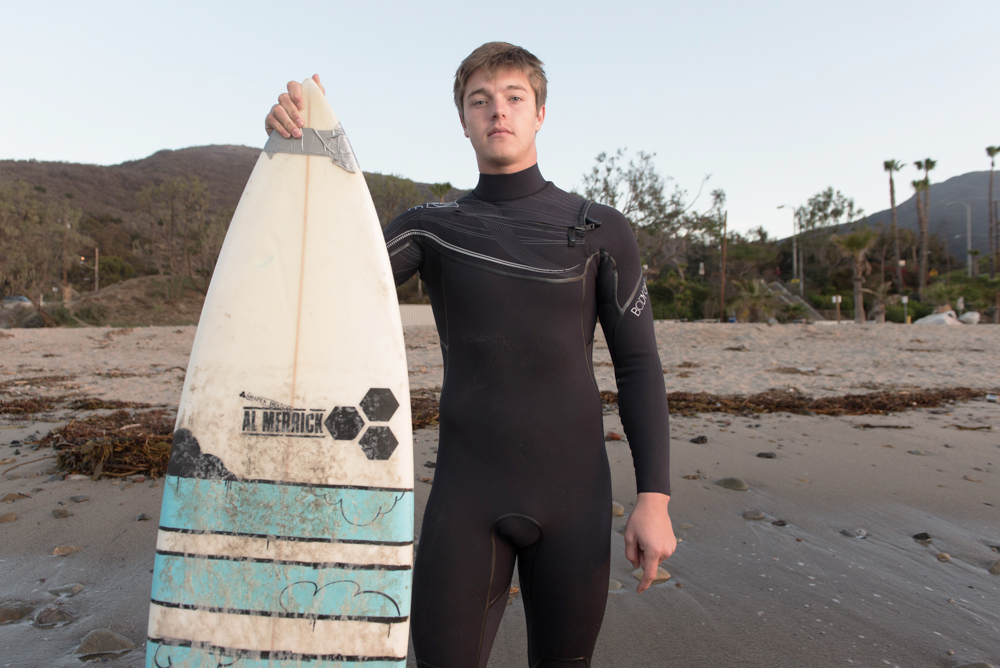 Smith once surfed competitively on the Loyola High School team, but he found the need to appease judges counterintuitive to the “free-spirit” nature of surfing. (Brandon Choe/Daily Bruin senior staff)

The early morning sky began to brighten as the car sped west down Sunset Boulevard. UCLA men’s volleyball player Hagen Smith’s fingers were crossed as he looked out the window toward the horizon.

“So far, from here, it’s better than I thought,” he says, scanning the morning surf as the car turned onto the Pacific Coast Highway in the direction of Malibu.

This morning, Smith wasn’t concerned with his role as one of the newest starting players for the Bruins, his team’s faltering league record or his performance during the previous night’s game.

As the sun rose and illuminated Topanga Beach in shades of orange and pink, the freshman’s mind was focused on his other passion: surfing.

“It is a good escape. You can go out there … and you think,” he says. “You think about what you’ve been up to – how you’ve been as a person, where you are in your life and how you want to be, how you want to change, whether you’re doing the right thing.”

Surfing allows Smith a moment of introspection, developing a mental clarity that affords him the intensity he exhibits on the court.

“His biggest asset to this team is his head,” said Smith’s father, Christopher St. John “Sinjin” Smith, who was an All-American setter for UCLA. “He’s very determined, he has a very strong drive, he’s positive on the court and he tries to get everyone into the game. … That’s an asset that you can’t really teach people.”

While an advantageous competitive mindset can be difficult for many athletes to develop, surfing has helped Smith hone his mental focus and become a valuable player for his team.

The surf was poor on this March morning, with swells only topping about two feet in height. Smith laid calmly on his board, eyes once again fixed on the horizon. He didn’t attempt to ride just any wave that came his way, instead he waited patiently for the few breaks that looked promising.

When he emerged from the water about an hour later, he shook his head, explaining that the surf had been particularly subpar.

But instead of showing frustration or complaining about wasting his time, Smith smiled and said simply, “It was just nice to be in the water.”

These days, Smith values any time he can spend in the water. What with a rigorous practice and academic schedule, he is never sure when the next chance to surf will present itself.

Surfing used to be more than just a pastime for Smith, who was president of the surf club and a member of the surf team at Loyola High School. Smith periodically surfed competitively, but he found his appreciation of the “free-spirited” side of surfing was lost in having to please judges.

Now as a hobby, surfing helps Smith maintain his competitive mindset, but more importantly provides him with release – a place to escape the pressures of an increasingly demanding athletic career.

Smith was recruited out of Loyola High School as a libero, a mainly defensive position, as part of a nationally acclaimed recruiting class for UCLA men’s volleyball. After a slew of injuries left the starting setter position open midway through the conference season, Smith, a freshman, was chosen to switch positions in order to fill the void.

UCLA men’s volleyball assistant coach Andrea Becker, who is also a trained sports psychologist, said that Smith’s ability to play setter, libero or any other position at a moment’s notice is an example of the resource his strong mindset provides the team.

“For a freshman in particular to come in and to be moved from different positions … and to do that with some authority says a lot about his character and his mental toughness on the court,” Becker said.

The freshman prides himself on being a “utility player” – one who can be placed anywhere at any time and produce good outcomes.

He might be one of the smallest setters in the Mountain Pacific Sports Federation, but what he lacks in stature Smith makes up for in effort and energy. He is consistently one of the most vocal players on the court, rallying his team during crucial points in the game.

“I definitely play with a lot of energy,” Smith said. “I love getting my teammates fired up, getting it fun, making it different than the monotone of every day having to get in the gym.”

Besides setting his teammates up for big plays, Smith is a master of the sneak play, unexpectedly going for kills himself when the opposing team least expects it. On the defensive end, Smith chases balls down relentlessly, sacrificing his body for all-important digs, which reveals his origins as a libero.

“He’s what we would call in this game today an undersized player, but he’s playing very, very big out there,” his father said.

As the car rolled back up Sunset toward Westwood for Smith’s 10 a.m. class, the freshman recounted some of the notable aspects of his surfing history.

The surfboard he rode was a gift from Lindsay Lohan’s brother.

A shark had given him the stitches in his foot.

The slight, barely noticeable line along the bridge of his nose was the result of surgery after it was broken by an errant surfboard.

Like his surfing career, Smith’s road to prominence on the men’s volleyball team has taken multiple turns. In just one season, Smith has played two different positions, made waves as the most undersized setter in the conference and has gone from filling in for injured players to being called a “freshman setting sensation” by the Pac-12 Network.

With UCLA men’s volleyball approaching a highly competitive postseason as a low seed, it will rely on Smith’s aptitude and adaptability more than ever in the rough waters ahead.

But as Smith said back on Topanga Beach: “It’s just nice to be in the water.”