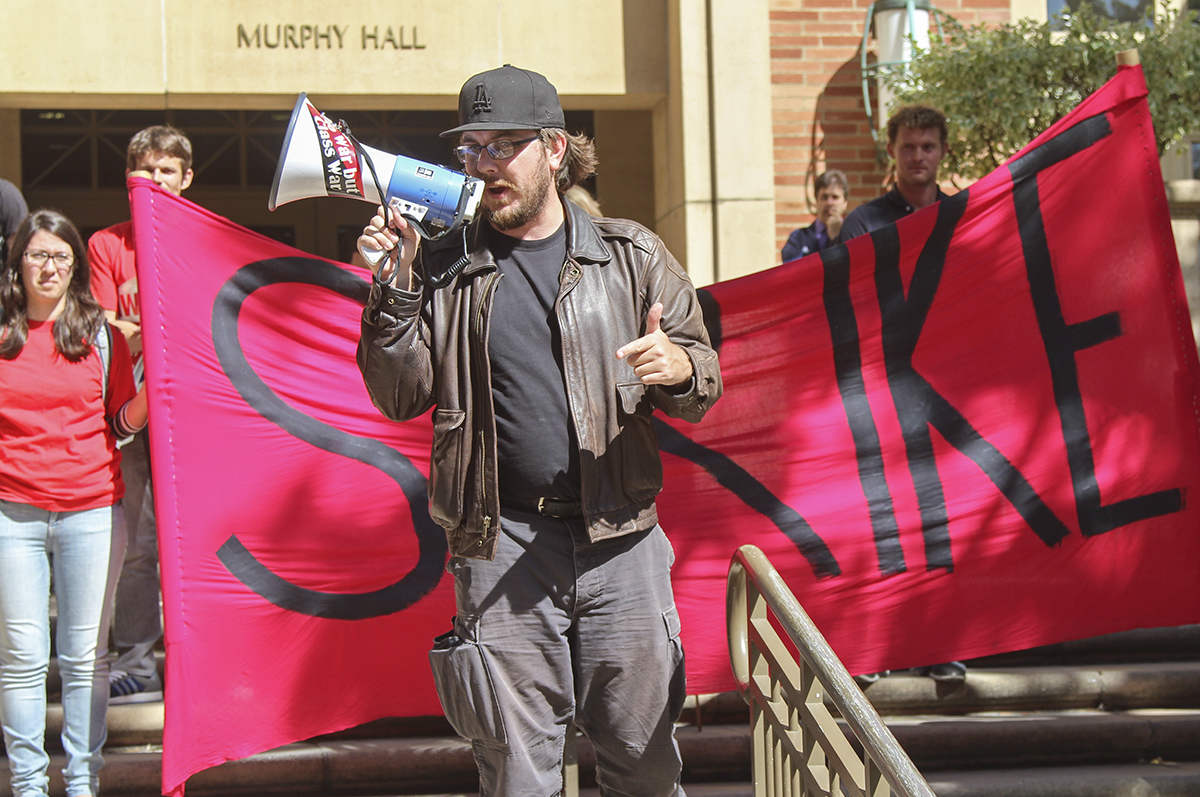 More than a hundred unionized teaching assistants and supporters went on strike at UCLA Thursday to protest alleged unfair labor practices they say University of California management has committed.

Graduate student workers rallied throughout the day, first marching outside Royce Hall and then around campus. At one point, about 150 protesters walked through Haines Hall, shouting “strike” throughout the floor.

The UC Student-Workers Union, UAW Local 2865, has been in collective bargaining negotiations with the UC since July over wages, workload and payment for undocumented students, among other issues.

The union filed two unfair labor practice complaints in recent months, one which claimedthe UC refuses to negotiate on decreasing class sizes. The other claims the UC intimidated its workers as they prepared for a sympathy strike in November with a union representing UC service workers.

Before the November strike, a counselor from the Dashew Center for International Students and Scholars sent an email in response to one international student’s inquiry. The email said international F-1 visa holders could lose their appointments and enrollment if they go on a strike.

If they no longer were enrolled or working at UCLA, the students would lose their visa status in the U.S., the email said. It also said any arrest from picketing could make it very difficult for students to obtain future visas to the country.

Jason Ball, a doctoral political science student and campus chair for the union, claimed the letter constitutes a threat for international teaching assistants. He claimed international students had a right to strike without losing their visa.

Tod Tamberg, a UCLA spokesman, said in an email that the counselor’s email was sent as a response to a personal inquiry by an international student. The email was not sent to other students, Tamberg added.

The union also claimed police filmed workers at various campuses who tried to voice their grievances to their supervisors, claiming it was an act of intimidation.

“Striking is the only way we can bring consequence(s) for the management for (their) conduct,” Ball said.

Ball also claimed the UC has failed to negotiate substantially on the issue of large class sizes for teaching assistants, which he says negatively impacts their ability to work. He said the union is not asking for a class-size cap, but an advisory committee on class size made up of labor and UC management.

In an update in March, the UC said the University and the union had already come to an agreement on class sizes in October. The UC declined to talk about conditions of the agreement.

The UC said it is continuing to make progress with the union as they plan to hold another bargaining session later this month.

“The strike will not resolve the issues on the table – it only hurts other students and their ability to get their education,” Shelly Meron, a UC spokeswoman, said in an email statement Wednesday. “We’ve been sympathetic to (the union’s) concerns and suggested solutions to many non-bargaining issues they’ve raised.”

Both parties said the effect of Thursday’s strike would be relatively small.

The union said it wants to send a message to the UC by having the strike early in the quarter.

“We don’t want to hurt undergrads. That’s not the goal of the strike,” Ball said. “Having said (that), if those acts continue, there’s no reason to think that we won’t strike again.”

Many students near the protest gathered to observe the scene. Some said they didn’t know about the strike beforehand but support the cause after listening to the protesters. Others said they were not sure what the strike was for.

Bradley Knitz, a fourth-year business economics student, said students may not see the effect of overcrowded sections because some students choose not to go to section. Teaching assistants may feel more of a burden since they have to grade all students whether they attend the section or not, he said.

Some staff and faculty also gathered around to observe the scene.

Bret Nighman, a manager at the anthropology department, said he understands why the union is going on strike. He said given the high cost of living in Los Angeles, student-workers should make more money for their work.

On Wednesday, 20 UAW 2865 supporters were arrested for blocking the entrance of a campus roadway while striking for the UC Student-Workers Union.

Some protesters said those arrests compelled them to come out to strike.

Thursday is the last day of the union’s planned two-day strike.

Clarification: A counselor from the Dashew Center for International Students and Scholars sent an email in response to one international student’s inquiry before the November strike.