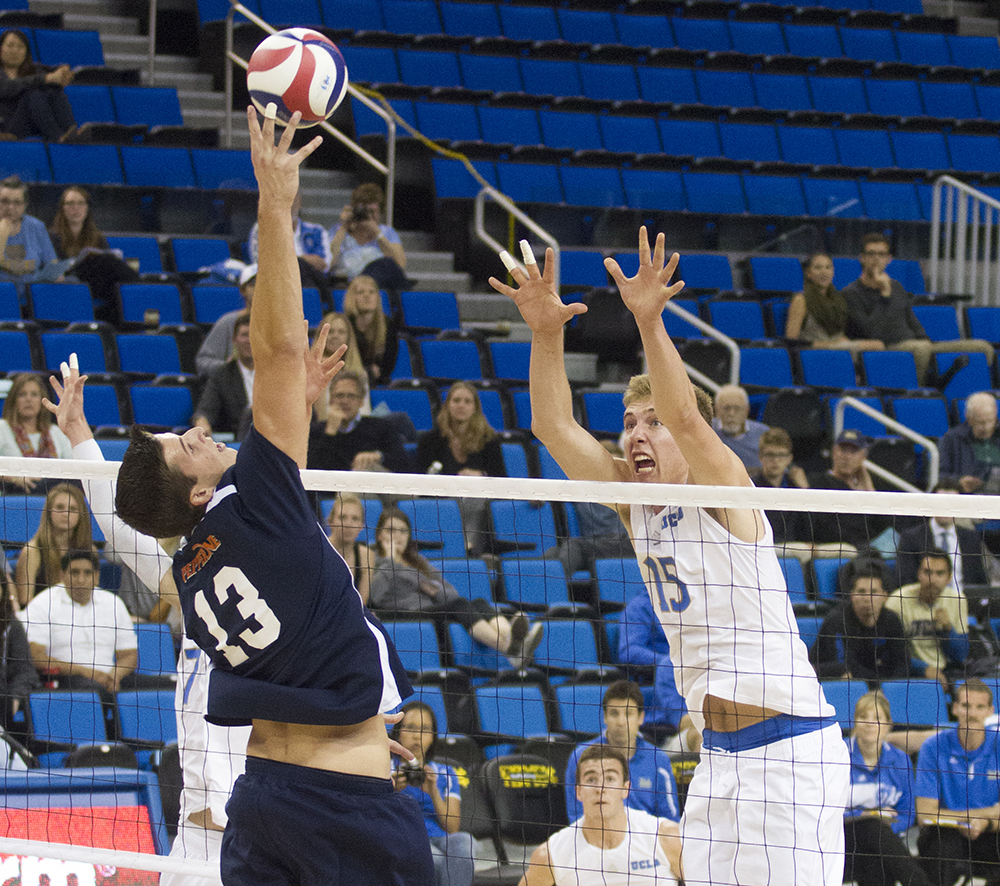 An injury, undisclosed for team reasons, has kept senior outside hitter Robart Page from the starting lineup as of late. (Nathan Vanderveer-Harris/Daily Bruin)

He wasn’t supposed to play all season, let alone start. It was a foregone conclusion that freshman setter Jake Reeves would redshirt the year, but then the injuries began to pile up. The Bruins were desperately short on outside hitters; the coaching staff had to find a solution before their March 15 home game against USC.

“In practice one day, I was put on the starting side and the coaches said, ‘You’re over there for a reason,’” Reeves said. “Then the day before ‘SC they told everyone at practice, ‘Jake is going to be starting at outside (hitter) tomorrow.’”

Reeves hadn’t seen a minute of action all year in order to preserve his eligibility. Now, with just a day to take it all in, Reeves was about to start in an unfamiliar role against the Bruins’ biggest rival. Decisions to pull a redshirt are usually made with direct input and compliance from the player in question. In this case, however, an agreement had already been made before the season.

“I wasn’t really ever planning to be here for five years, and the coaches knew that,” Reeves said. “So they had the green light to pull my redshirt whenever they pleased – I didn’t mind losing the redshirt at all.”

The first challenge for Reeves was just coming to terms with the fact that he was actually going to play. The next challenge – and probably the more difficult one – was adjusting to his new position. Although Reeves sometimes played outside hitter at the high school level, he was always a setter on his more competitive club team. After just three games as an outside hitter for the Bruins, Reeves admits the transition is far from complete.

“I’m still getting used to swinging smart. I’m not considered a huge outside or anything, so my main thing is that I have to be quick on the ball and smart with my decisions in hitting,” Reeves said. “When you’re small, you can’t hit over the block – you have to emphasize hitting around it or off of it, swinging smart and not as hard.”

The road to recovery

Among the many Bruins who have recently been sidelined with injuries are senior outside hitter Robart Page and sophomore setter Steve O’Dell.

Page missed the match against USC on March 15 with an undisclosed injury and has been limited in the two games since then. Despite claiming he was 100 percent during Monday’s practice, Page said he doesn’t know how soon he will be fully reinstated into the starting lineup.

“We’ve been trying some new lineups – Jake Reeves is playing really well and Spencer (Rowe) played one of the best matches of his career at BYU, so it’s been a combination of things but I think our team is playing well,” Page said. “I’d obviously love to start, but it’s whatever the team needs. I’m ready to come in and help whenever they need me.”

The match Page missed was the same match O’Dell returned from an injury of his own. The sophomore setter is fully fit after missing more than half the season, but the mental aspect is just as important as the physical when it comes to recovering from injury.

“I just need to get my mind back into more of a volleyball mode and running an offense,” O’Dell said. “Volleyball, like all sports, is not only physical. … If your mind’s right, you can beat the guys that are more athletic.”