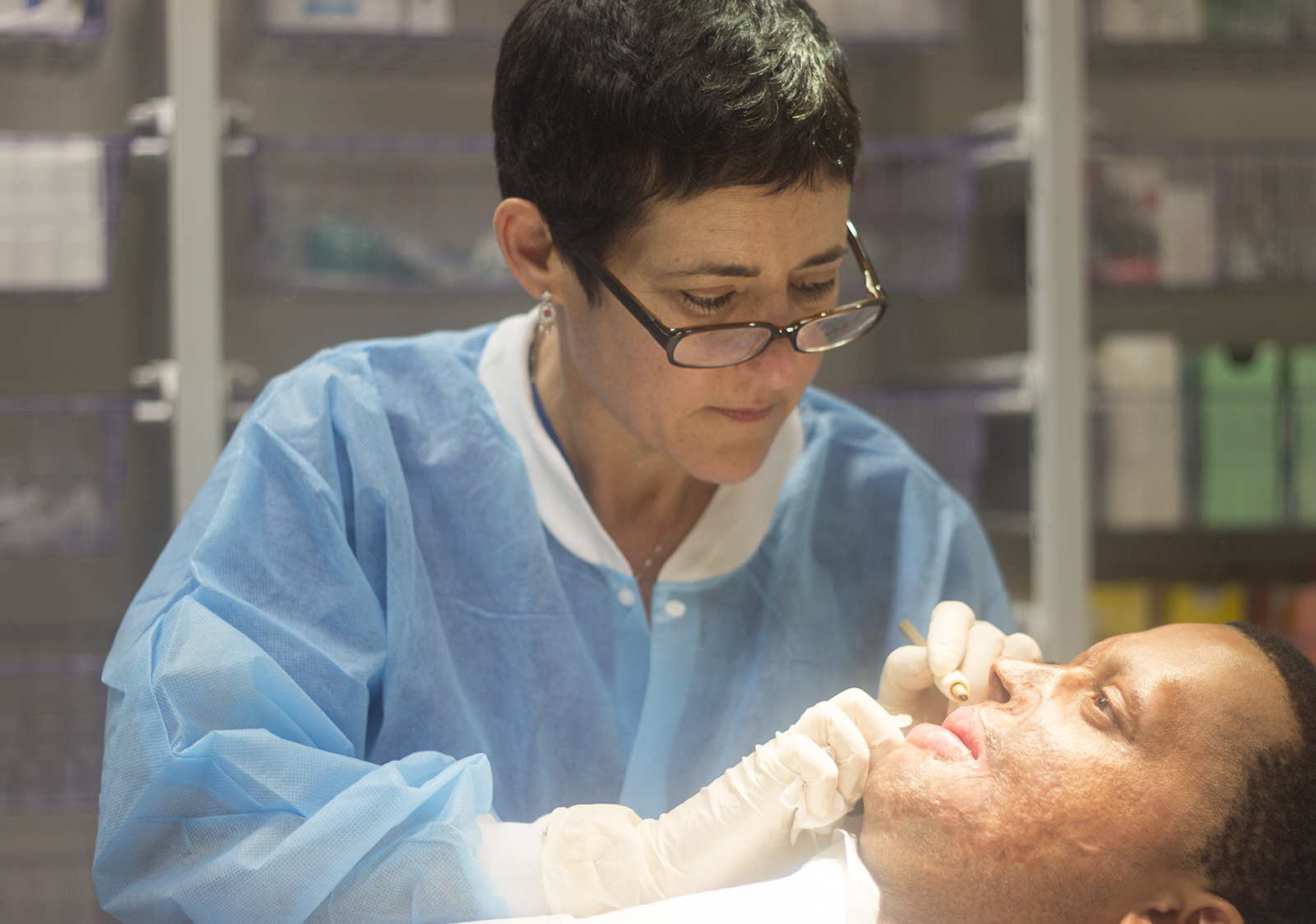 Capt. Jabari White was sitting as a passenger in a vehicle when a bomb detonated, burning 60 percent of his body. He now comes to Ronald Reagan UCLA Medical Center from Washington, D.C. for tattooing to blend the pigmentation on his face. (Felicia Ramirez/Daily Bruin staff)

Laura Albano dipped her hand tool into dark brown ink and applied it to the upper lip of the retired Army captain, covering up the scars from a deep burn he obtained on a tour of duty in Iraq eight years ago.

Capt. Jabari White was sitting as a passenger in a vehicle when a bomb detonated, burning 60 percent of his body.

White now comes to UCLA to receive care for his wounds and tattooing to blend the pigmentation on his face. After White was wounded in 2006, the burn left him with light and dark areas all over his face, which Albano now blends together with medical tattoos.

“I would say that (the procedure has) really just allowed me to be more like myself,” said White, who travels from Washington, D.C. every few months to receive treatment at UCLA. “While I’ll never be the same person physically that I was before, the tattooing somewhat put me back together.”

White said he travels the six hours to Los Angeles for the high quality of care he receives through the Operation Mend program, which is only offered at the Ronald Reagan UCLA Medical Center.

Albano, a medical tattoo artist at the medical center, performs procedures for wounded soldiers and patients who have undergone breast cancer surgery or received significant scars. She also treats patients who want permanent makeup, such as lip liner, eyeliner and eyebrows.

As a medical tattoo artist for Operation Mend, Albano tattoos veterans’ faces to cover their scars, which usually result from burns from explosive devices while serving in war.

She works at both UCLA and her private Redondo Beach clinic and sees about 55 patients each month.


“To be able to do a procedure to help (people) feel complete, it’s fantastic,” Albano said.

Growing up, Albano said she planned to be a lawyer. While she was studying for the LSAT in 1993 after graduating from Brigham Young University, Albano took a permanent makeup class in southern California after a friend suggested it.

“I didn’t really want to be a lawyer,” Albano said. “And I used to draw and paint a lot of the (students). I took the permanent makeup class and I loved it. I never looked back.”

Eleven years ago, Albano joined the UCLA medical center staff after the chief of plastic surgery asked her to help cover the scars of patients who had undergone breast cancer surgery.

Albano said she also joined Operation Mend, a program that helps wounded soldiers by providing reconstructive surgery, medical and mental health support, because she wanted to make a difference in war veterans’ lives.

“Anything we can do for them will never be enough to repay them for what they’ve done for us,” Albano said. “But at first, it was hard (to see their wounds). I struggled seeing them so injured initially.”

The tattooing procedure requires anesthesia on the face or scalp before Albano tattoos the pigment with a hand tool, as she did on White’s upper lip to blend in the lighter areas of his face.

For breast cancer patients, surgeons first remove the cancerous tissue and then create an artificial breast to replace the original one. Afterward, Albano uses a special machine to tattoo the pigment onto the patients’ breasts so they look more natural.

“When she first gave me the mirror (after the procedure), it was very emotional because after my mastectomy, I didn’t feel whole,” said Jacqueline Fairbanks, a breast cancer patient who received tattooing from Albano earlier last month. “And this was the last and final step in order to make me whole again.”

The procedure allows patients to maintain their sense of self despite going through cancer, said Jaco Festekjian, a UCLA physician who specializes in plastic surgery.

“People feel good about themselves when they see that although they had breast cancer, their personal well-being is not lost,” Festekjian said. “They can maintain that still.”

Albano said the positive influence her work has had on patients’ self-confidence is one of the main reasons she enjoys medical tattooing.

“To this day it’s not even a job because I love it so much,” she said. “To have a skill set where I can have people feel a little better about their appearance, or feel a little more ‘normal,’ is very rewarding.”