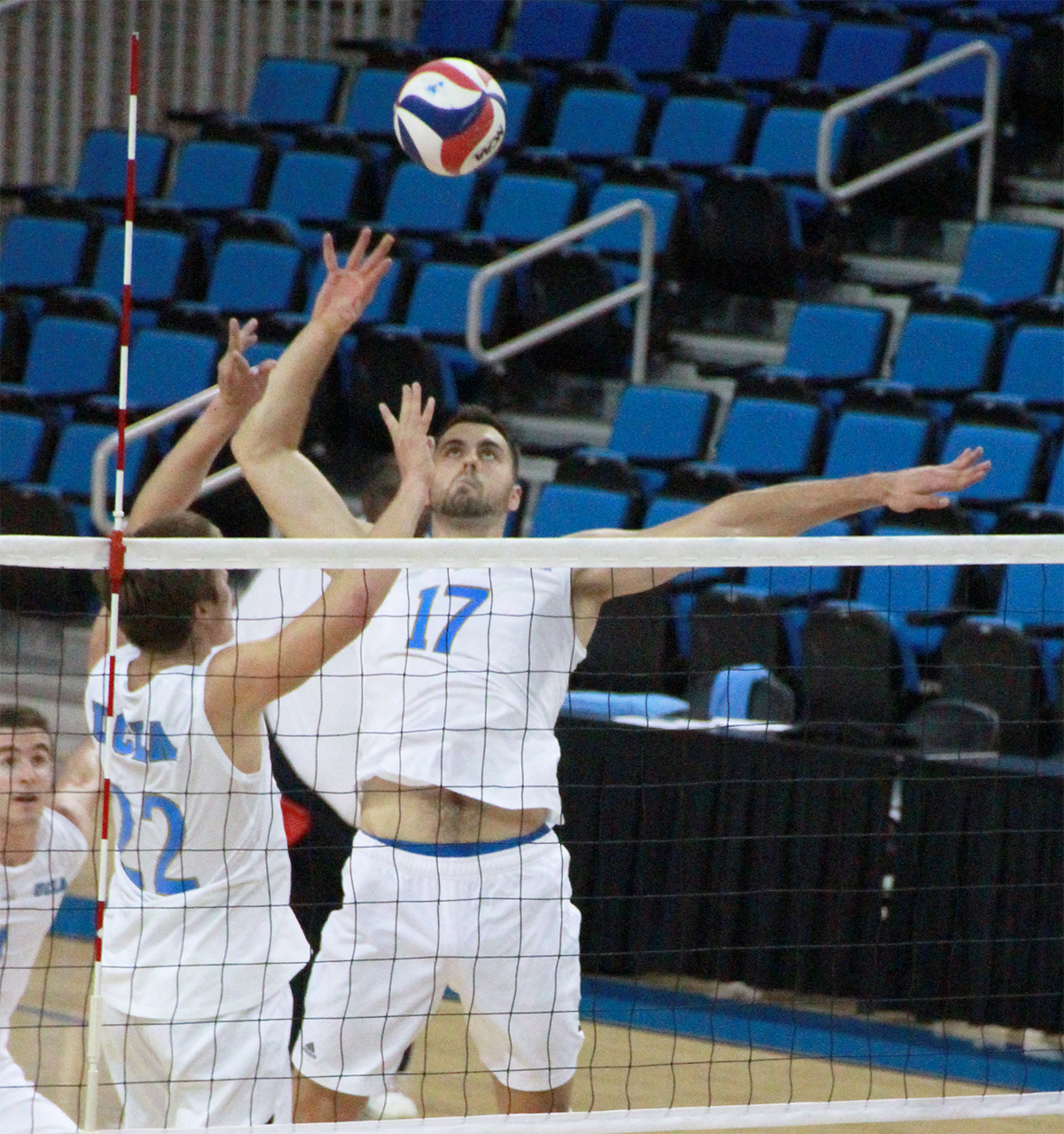 UCLA men’s volleyball senior captain Spencer Rowe ran up the sideline in Pauley Pavilion, clapping his hands emphatically and staring his teammates in the eyes. The set score was 23-22 in favor of opposing Pepperdine.

“Right now! Right now!” the middle blocker yelled, crouching to level his 6-foot-6-inch frame with his teammates, desperately trying to rally them at a crucial point in the match.

Judging by Rowe’s emotion alone, it looked like the fifth set. In fact, it was only the second.

The Bruins would go on to take set two 30-28 after a number of spirited volleys that saw UCLA finally display some defensive blocking prowess after struggling in that department as of late. However, this would mark UCLA’s only victory of the match as they ultimately lost to Pepperdine 3-1 on Tuesday night.

The emotion displayed by Rowe and his teammates – freshman setter Hagen Smith literally jumping for joy after a missed serve by Pepperdine, senior outside hitter Robart Page slamming the court angrily after missing the final dig – emphasized the significance of the game and the detrimental impact of the loss to the Bruins’ season goals.

After the final kill by the Waves, which left the Bruins looking crumpled and defeated as the winners slapped each other’s hands victoriously, Rowe called his squad in for a tight huddle. The team closed ranks around their captain, who gave them a serious talk complete with passionate hand gestures.

“We’re just going to work our asses off Thursday and Friday and be ready to go (for USC Saturday),” Rowe said. “That’s all we can really care about right now.”

The loss is the Bruins’ fourth in the past five games, dropping their season record to 14-7 with only seven games left in conference play. UCLA has struggled lately against conference competition, losing to Long Beach State, UC Santa Barbara and now Pepperdine – teams ranked in the top three of the Mountain Pacific Sports Federation – all in the last month.

“When you play for UCLA I think people play up … because of your tradition and history,” said coach John Speraw during the Bruins’ last losing streak, which came at the beginning of the season. “You’ve always got to be ready to play.”

While the team admitted to being outplayed in recent losses, that was not the case Tuesday, as the Bruins exhibited high energy throughout the game – chasing down loose balls and refusing to give up on plays. Some longer volleys saw the Bruins make three blocks back-to-back in a single play – a feat that simply was not happening last week as the team failed to execute defensively.

Instead, each set against Pepperdine was nail-bitingly close and came down to the last few points. In the end, UCLA made too many mistakes – careless service errors and overhit kills – to overcome Pepperdine.

“(Defense) is something we were able to improve. We were digging more balls and our block is alright,” said senior outside hitter Gonzalo Quiroga. “I think if we start serving hard it’s going to be easier for us to start being better – that’s definitely one of our weaknesses right now.”

With the season beginning to wind down, the Bruins can’t afford to drop any more close contests against highly-ranked teams if they want to keep their aspirations of a national title alive.

“I think (the key) is just everyone staying together and believing in their heart that we can do it and, you know, I think we can,” Rowe said. “The key to success is really to start executing offensively and once we can do that we can return to what we were doing earlier (in the season) and we’ll start out-hitting teams and that’s just a key.”

With games against powerhouses BYU and Long Beach State just a few weeks away, UCLA needs to get back on track – fast.