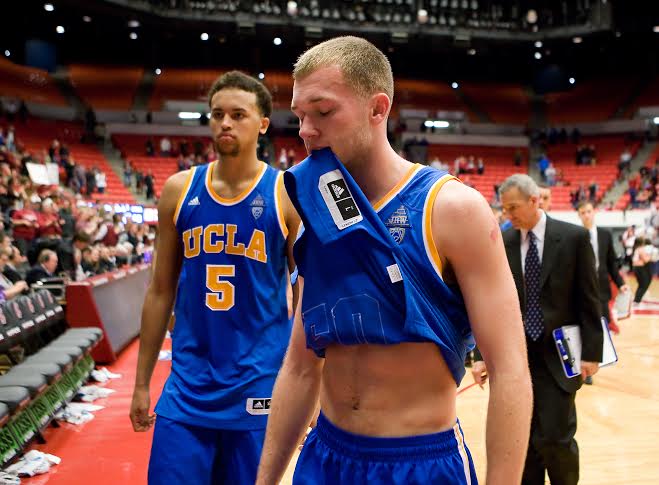 PULLMAN, Wash. — Someone forgot to tell the UCLA men’s basketball team that, unlike baseball, the game isn’t over after nine.

In the opening moments of the Bruins’ final regular season game Saturday, a meeting with the Washington State Cougars to close out the regular season, sophomore guard/forward Kyle Anderson hit a jumper, followed by a crisp jump shot from redshirt senior forward David Wear and a fortunate three-pointer from junior guard Norman Powell.

Sophomore guard Jordan Adams swooped in for an easy layup less than 20 seconds later, and just like that, it was a 9-0, three-possession game with just over three minutes gone.

And that, in what surprisingly crumbled to a 73-55 loss, is where UCLA began to coast.

The Bruins determined they were going to beat the Cougars just like other teams had throughout the season: Let a less-talented Washington State team shoot the three-point shot ad nauseam.

Not only did UCLA go ice cold, shooting just 33.3 percent from the field for the game, but it failed to account for what would happen if Washington State actually found its rhythm on offense.

The Cougars made three straight threes in the closing minutes of the first half – and five straight field goals – to transform a relative shutout into a bubbling UCLA embarrassment, an eight-point halftime deficit.

Washington State started the game as the Pac-12’s worst rebounding and assisting offense. The Cougars averaged the worst assist-to-turnover ratio and held the conference’s worst field goal percentage at 40.2 percent.

Yet, somehow, holding UCLA to just one field goal in the opening 6:21 of the second half, WSU managed to make the deficit worse. Opening up the latter half on a 14-5 run, the Cougars crushed a Bruin squad that didn’t appear to want it as badly as its counterpart.

“Well, nothing pretty about it,” said coach Steve Alford. “(Washington State) played hard. They deserved to win. We didn’t do those things. So when you don’t concentrate, you don’t deserve to win.”

Maybe Washington State forward D.J. Shelton, honored Saturday as one of the Cougars’ two seniors playing his last game at Beasley Coliseum, was just sick of his team’s eight-game losing streak as he grabbed a misplaced Adams dribble and sprinted for a dunk with 8:41 to play. Maybe the Cougars saw a way out of the Pac-12’s cellar and never looked back.

Maybe UCLA, which again faltered after a gritty weekday win, is numb to the feeling of disappointment.

“We’ve got to remember what this feeling is like,” said Anderson, who logged a team-high 19 points and 11 rebounds. “We’ve pretty much felt it all season. We’ve got to use it for encouragement.”

After Anderson missed a free throw with 5:58 to play, Washington State (10-20, 3-15 Pac-12) students, sparse in numbers and trying to channel Duke’s famed student section, chanted a somber, “You let the whole team down.”

No, the entire UCLA (23-8, 12-6) team, for the fourth of four conference road trips, was a letdown. Just days separate the Bruins from one-and-done tournament competition, but they are already more than well-versed in the style.

UCLA experienced its worst loss to Washington State in decades Saturday but, even worse, the 31-game-worn Bruins are as befuddled as the Bruins who lost at Utah in January.

“We’re still trying to figure it out,” Adams said. “We were asking the same question when we went in there. That’s been our biggest Achilles.”