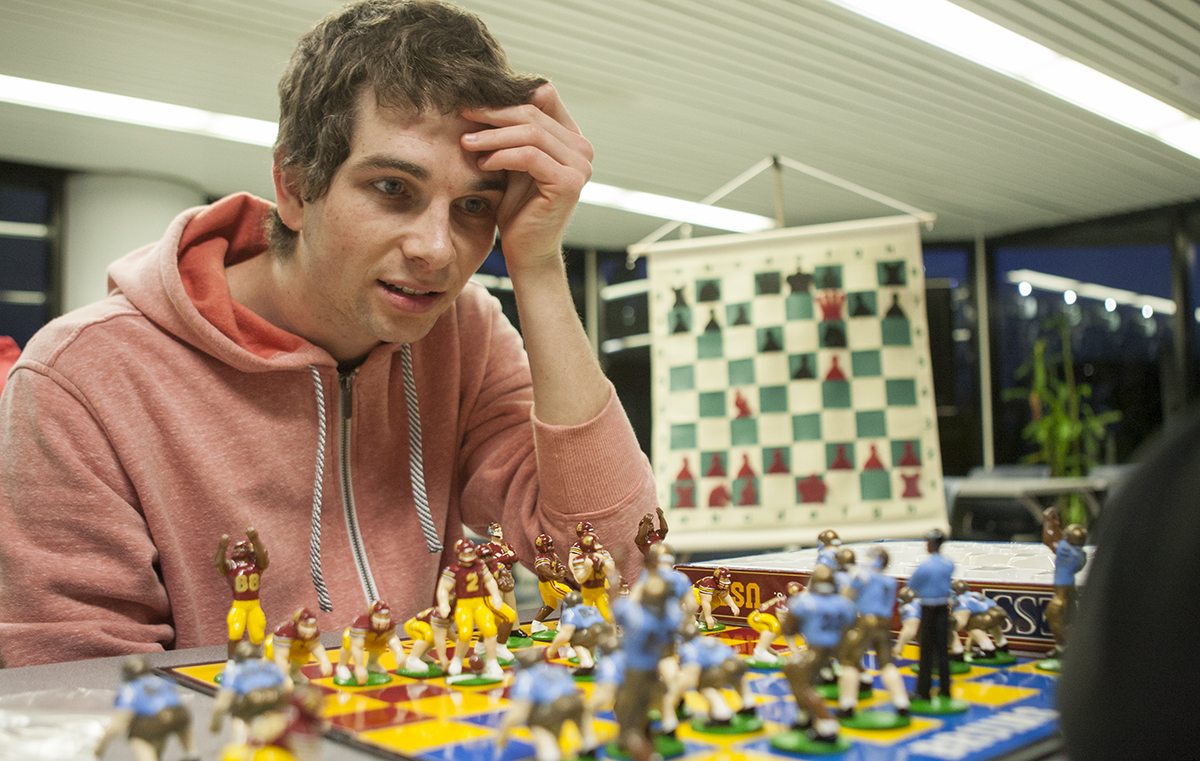 On a center table, the team sets up one of its favorite boards – a blue and red platform that is played with toy human chess pieces dressed as USC and UCLA football players.

This school year marks the return of its status as a club sport. The official UCLA Chess Club meets Mondays in the games lounge in the John Wooden Center from 6 to 8 p.m. and welcomes all students to practice and learn about chess.

The pair is leading and training the chess club this year in hopes of attracting more students to join the club and compete in tournaments.

All UCLA students can join the club, but members who want to compete must attend a series of training sessions hosted by Luke Harmon-Vellotti, who is currently 15 years old and a three-time national chess champion.

The chess team has struggled to maintain its legitimacy as a club on campus in the past. Right now, the club has a small number of students who regularly attend its meetings, but members are hoping to recruit more people this year.

The team competed at the United States Amateur Team West tournament, which took place on Feb. 15-17, winning the title of best college team and defeating schools like USC and Stanford University.

Some of the club’s members have played chess for several years and competed in numerous tournaments outside of the UCLA club.

Vincent Huang, a second-year molecular, cell and developmental biology student and avid member of the club, remembers the excitement of winning the North American Open chess tournament as a high school student.

Now, Huang is a member of the UCLA Chess Club. Huang has played chess for more than a decade and joined the club last year as a way to continue his involvement in the game during college.

Huang, who began playing chess in first grade, said he likes the thrill of a challenging chess game.

Though most of the club members practice the game for fun, they also said it gives them discipline and helps them hone their strategic thinking abilities.

Huang said playing chess boosts his mental processing and academics. He said that chess teaches him self-discipline and concentration, and improves his ability to concentrate for long periods of time.

Robert Thayer, a third-year mechanical engineering student who started playing chess his first year at UCLA, said he uses the game as a way to distract himself from the stress of school.

Since Thayer started teaching himself how to play chess through online programs, he said he has realized how much strategy and theory goes into winning a game.

“It’s probably the least luck-based game you can find,” Thayer said. “But the best way to improve is to keep playing.”

Thayer said he has always known the rules of chess, but after joining the UCLA club, he learned about different chess tactics, such as opening theory.

The club is open to students who might lack experience in playing chess.

To keep the club growing this year, the Harmon-Vellotti brothers said they plan to host socials at which interested students can play and attend chess matches.The club plans to host more tournaments and events, including a tournament with the engineering department during Engineers Week.