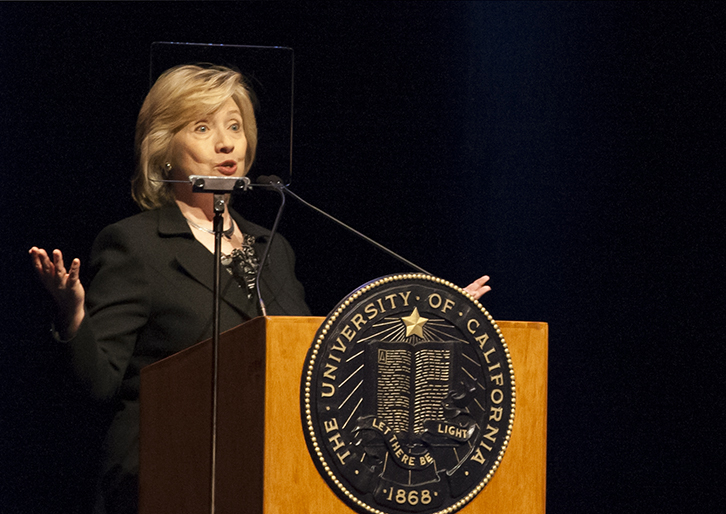 The conflict in Ukraine came to the forefront in Hillary Clinton’s lecture at UCLA, as she again denounced Russia’s recent intervention in the country’s region of Crimea.

The former Secretary of State and First Lady gave her talk as part of the Luskin Lecture for Thought Leadership, funded by an endowment from Meyer and Luskin Renee, two UCLA alumni. At the beginning of the lecture, Chancellor Gene Block said the university awarded her the UCLA Medal, the university’s highest honor, for her work in reforming healthcare, advocating for rights of children and families and advancing human rights and diplomacy.

In her discussion, Clinton criticized Russian President Vladimir Putin’s recent decision to send troops to Crimea in Ukraine to protect Russian minority groups there, saying it echoed Nazi Germany’s occupation of countries like Poland and Czechoslovakia in the name of protecting German minorities there. The day before her lecture, she had likened Putin – whom she called a “tough man with a thin skin” at her lecture – to Adolf Hitler while speaking at a local community event in Long Beach.

“The Russian intervention in Crimea violates international law and is therefore a deep concern to the U.S. and our allies,” Clinton said. “All parties in Ukraine and in the region should support reconciliation and the country’s return to political and economic health.”

Ukraine has been in political and social turmoil for months after protests erupted against the country’s former president, Viktor Yanukovych, who wanted to bring Ukraine closer to Russia as opposed to Europe. The president has since fled the country, and the Ukranian parliament has worked on creating a new government to fill his absence.

The bulk of Clinton’s prepared lecture focused on the issue of unemployment for millenials. She stressed the need for more paid internships for college students, saying that unpaid internships are not sufficient in helping them secure full-time jobs. She suggested increasing the number of paid internships and expanding training and mentoring programs as a way for solving the issue.

“Businesses have taken advantage of unpaid internships to an extent that it is blocking the opportunities for young people to move on into paid employment,” Clinton said. “More businesses need to move their so-called interns to employees.”

Many students who attended the lecture said they enjoyed the lecture and viewed Clinton with admiration. Danny Siegel, a first-year political science student and field director for Bruin Democrats, waited in the standby line for four hours after being denied a ticket in the student raffle twice to attend the lecture.

“It was completely worth it,” Siegel said.

In her lecture, Clinton gave no significant hints or announcements regarding the 2016 presidential election. Her candidacy in the election has been highly anticipated since she last ran for president in 2012.

When asked whether it’s important for the U.S. to have a female president, Clinton said it depends on the candidate’s merit but she anticipates the U.S. will eventually have a woman president, even though she thinks the U.S. political system makes it more difficult for women to move up through it.

However, Lynn Vavreck, a political science professor nationally known for her expertise on elections, campaigns and public opinion, said in an interview with the Daily Bruin she anticipates Clinton will run for the presidency.

“She has a very good chance of being president of the U.S., which will be remarkable,” said Vavreck, who monitored a question-and-answer session with Clinton after her lecture. “She is an example of fighting hard to break everything that society puts on women and she used those opportunities to do good.”

When asked what final advice she had to offer college students, Clinton – the first First Lady to run for president and the first woman to serve as a New York senator – gave advice from Eleanor Roosevelt, whom she called her favorite predecessor: “Grow skin like a rhinoceros.”