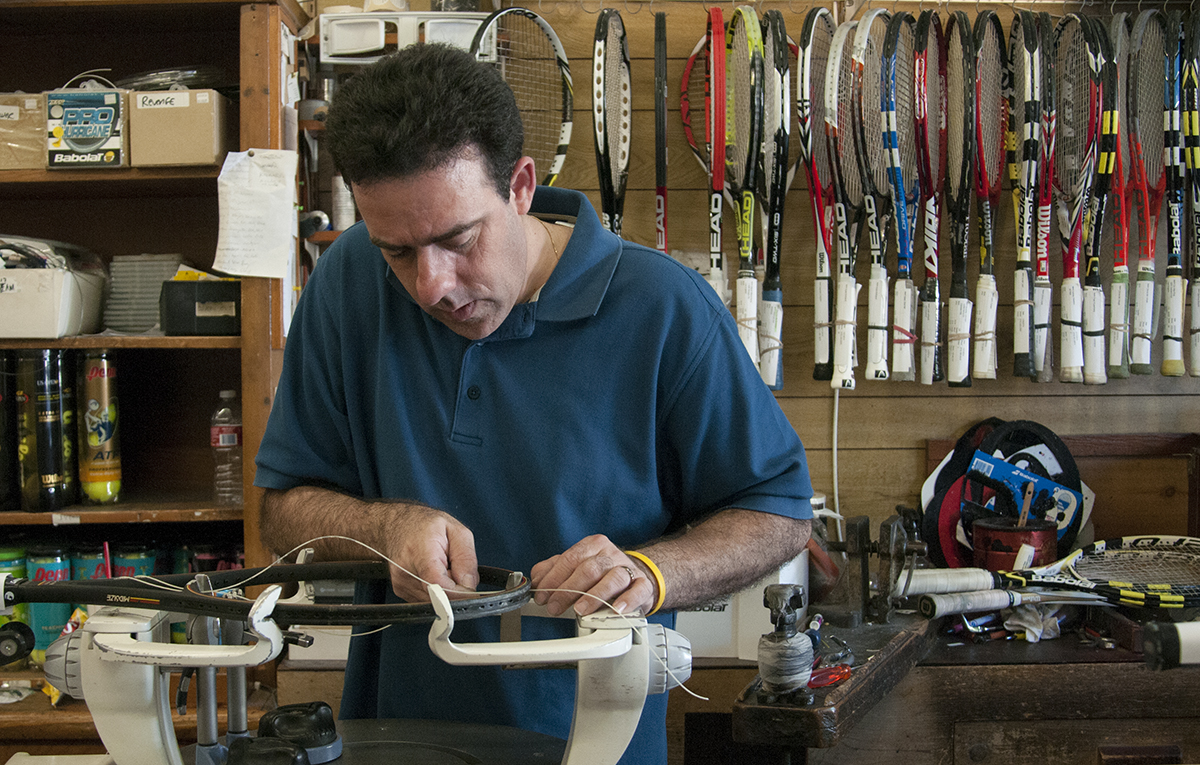 It’s easy to tell when avid tennis fans enter Westwood Sporting Goods. They pass by the shiny rackets and bags displayed in front and instead veer toward the dusty animal heads, stained balls and broken rackets – memorabilia from the shop’s historical role in the tennis world.

Westwood Sporting Goods is one of the oldest stores in Westwood Village and will celebrate its 80th anniversary later this year. The store has been serving the UCLA men’s and women’s tennis teams since 1934 and continues to offer tennis-related equipment and pieces of the Village’s history to its customers.

Store owner Rick Hartman took over the store from his stepfather 20 years ago. Hartman said he wasn’t passionate about tennis at the time.

“But I am now. I have to be!” Hartman said, looking at the variety of tennis accessories surrounding him.

The store has preserved its originality by retaining several reminders of its past, including the original cash register, which was installed by the founder, Shelby Johns. The register can only ring up a bill of up to $99, so if a customer makes a purchase that is more than this amount, the cash register has to be rung up more than once.

The store is especially recognized in the collegiate and professional tennis community for its racket-stringing service, said Billy Martin, coach of the UCLA men’s tennis team.

Martin said his team used Westwood Sporting Good’s stringing services until 10 years ago. He estimates that his team breaks 800 rackets per year, which he said is understandably too much for Hartman and his employees to handle.

“When the pros are in town, they know where to go. You give (the store) a racket that needs fixing, it’s strung and ready to collect the next day,” said Martin.

The cabinet near the entrance is filled with autographed tennis balls from the professional tennis players who have visited the store.

Long-retired tennis legends including Jimmy Connors and Boris Becker, as well as up-and-coming talents such as Sloane Stephens have used the store’s stringing services, Hartman said.

Hartman added that players customize the string tension, balance and grip size of rackets to suit their playing style.

Hartman pointed toward Serena Williams’ broken racket, which has an unusually large grip size. He smiled while examining the signature scrawled across the grip of the racket that Williams used at the U.S. Open two years ago.

In the back of the store, a collection of old animal trophy heads decorate the walls.

Tony Trabert, tennis legend of the 1950s, left a plastic model of a fish he had caught when his second wife demanded he get rid of reminders from his previous marriage.

Arthur Ashe, a UCLA alumnus and multiple grand slam winner, worked in the store over one summer while attending UCLA in the 1960s. His tasks included dusting the moose head that now pokes out between the racket bags at the center of the store.

“(Ashe) was the last one to dust the moose head. No one has dusted it since then and no one ever will,” Hartman said, laughing.

Steven Sann, chairman of the Westwood Community Council, said that the store is one of the treasures of Westwood Village.

“Like our other longstanding family-owned businesses in the Village, this shop gives the Village a unique identity, unlike a typical shopping mall. When you walk into the shop, it’s like stepping into a time machine,” Sann said.