Maia Ferdman: USAC vote on resolution would be counterproductive 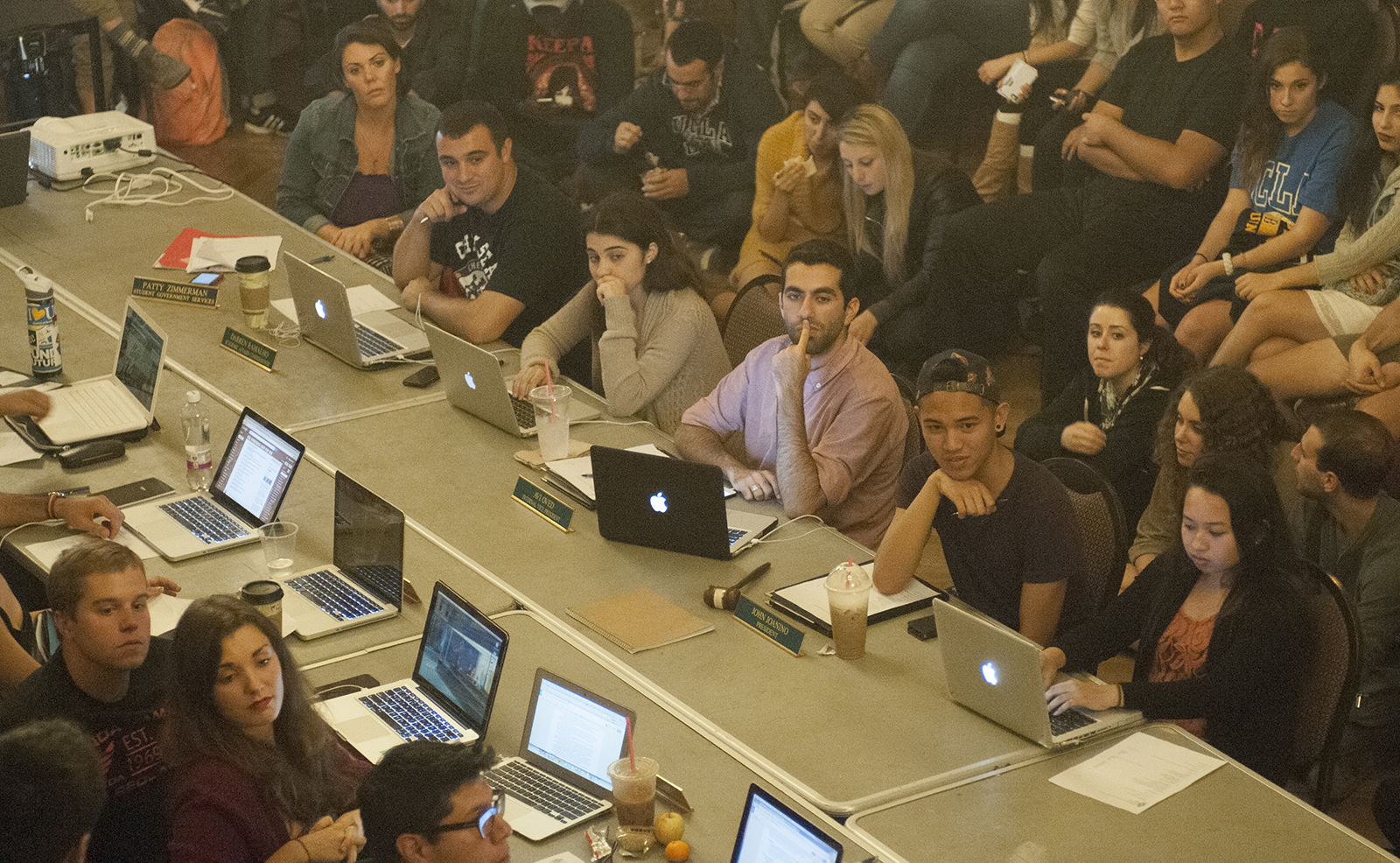 At a meeting in October, public comments on and discussion about a resolution dealing with the Israeli-Palestinian conflict lasted until after 3 a.m. (Neil Bedi/Daily Bruin senior staff)

The Undergraduate Students Association Council this week chose to move its meeting to Ackerman Grand Ballroom, foreshadowing the robust response it expects to one particular agenda item – a resolution to divest from companies that profit off the Israeli occupation of the Palestinian territories.

On the one hand, the resolution’s moral basis – that UCLA should not invest in companies involved in human rights abuses – is reasonable and relatively inarguable. Its language also seems to present some opportunities for bridging the gap between student groups. For example, a clause distancing the resolution from the national Boycott, Divestment and Sanctions movement against Israel, which some argue is anti-Semitic, seems promising.

But the resolution’s implications reach far beyond its surface-level morality. Below its language exists a deeply embedded antagonism between communities on either side of the conflict, a situation that any vote will only exacerbate.

Because of the ingrained division between pro-Israel and pro-Palestinian groups on campus, 13 councilmembers simply cannot accurately speak for the entire student body on this issue.

In order to make their decisions, councilmembers have been meeting with students from both sides of the issue and conducting their own individual research on the conflict and the resolution’s possible repercussions.

Despite honest efforts to educate themselves as holistically and fairly as possible, USAC members’ sparse background on the conflict leaves few of them qualified to vote on a resolution with such symbolic weight and historical baggage.

As a Jewish student who has been to the region and has researched it extensively, I cannot accept that these 13 students will speak for me on a deeply personal issue and will decide UCLA’s symbolic position on the conflict – a position with possibly international significance. Taking a stance on this conflict, especially on behalf of others, requires understanding much more than just an overview.

USAC councilmembers have studied the conflict for a few months – but they simply cannot claim to fully grasp its complexity.

“It is naïve of anyone on council to say (they) understand the conflict,” said Academic Affairs Commissioner Darren Ramalho. “(But) I want to stress that I’m doing everything I can to learn.”

Despite doing some individual research, most councilmembers’ exposure to the conflict is purely from campus events and conversations with two polarized, biased campus groups.Of the 13 councilmembers, most have not been to the region and only three have family ties in the Middle East.

Of those who have visited Israel, Ramalho and General Representative Sunny Singh traveled on a sponsored trip with the Anti-Defamation League, an organization specifically committed to fighting anti-Semitism and hardly a neutral third party.

This resolution therefore compels councilmembers to make an emotional judgment about who is more persuasive and whose emotional appeals are more convincing. It not only pits student groups against each other, but also forces USAC to take a side.

I’ve written in the past about how the conflict’s manifestation on campus is simplistic and counterproductive to peace. The emotional public comments likely to arise at the council meeting, and USAC’s final decision on the resolution, will only continue the trend of approaching the conflict on campus without nuance and without a critical lens.

“It is not my job as a councilmember to speculate about whose feelings will be hurt (by this resolution),” said Lizzy Naameh, a general representative and one of the resolution’s co-sponsors. “We need to vote for what we think is morally right, and not worry about people being upset, because either way (that is) going to happen.”

This resolution hurts more than feelings and represents more than a moral stance; it represents the voice of the undergraduate student body at UCLA. Its result will invariably disenfranchise at least one group of students, and not recognizing this fact is irresponsible of an elected representative.

Tuesday’s vote also runs the risk of hindering USAC’s efficacy as a whole by potentially damaging relationships among councilmembers and between council offices and campus groups.

She said her office collaborates with both sides on separate issues and that she is worried that a vote either way will discourage students from future collaborations.

The resolution thus begs the question: Should councilmembers whose offices are meant to increase student health and wellbeing, promote cultural awareness and dialogue and entertain campus, make a decision that pits students against each other and will completely alienate at least one campus community?

Abstaining from this vote or pursuing an alternate approach would not be a cop-out; rather, it would make a statement that USAC councilmembers refuse to make a one-sided decision in the name of all students.