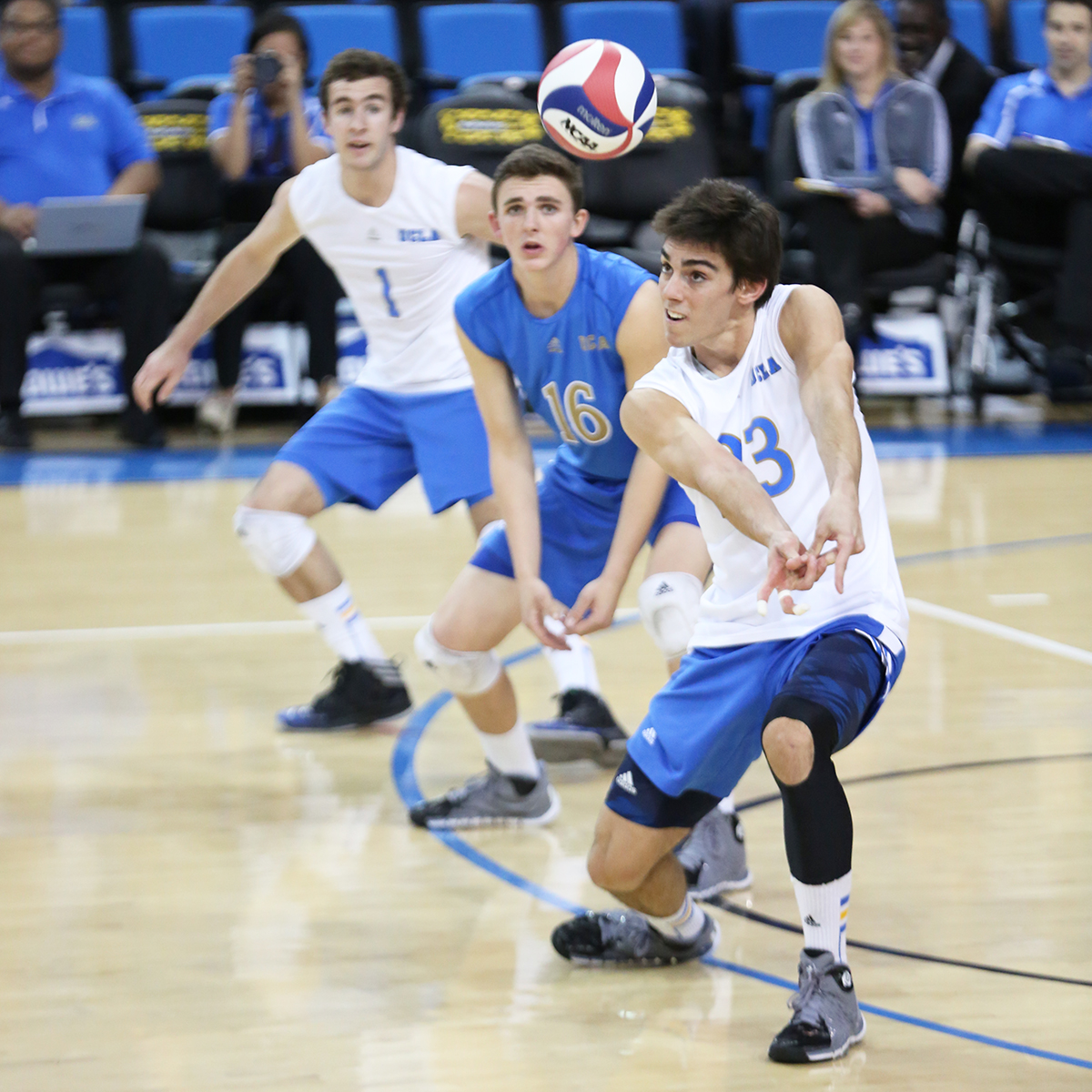 Senior outside hitter Gonzalo Quiroga was one of the only veterans to see playing time Sunday, as the Bruins chose to rest many of their usual starters in preparation for Monday’s game against No. 9 Stanford.
(Jose Ubeda/Daily Bruin staff)

It was a glimpse into the future of UCLA men’s volleyball. It was a showcase for arguably the best recruiting class in the nation.

Coach John Speraw threw four freshmen into the starting lineup on Sunday afternoon, but the No. 3 Bruins (12-3, 9-2 Mountain Pacific Sports Federation) carried on with business as usual as they swept Pacific (2-13, 1-10) in straight sets.

Senior outside hitter Robart Page – typically a no-doubt starter – was one of the few veterans rested on Sunday, and it’s fair to say he enjoyed the show put on by the young Bruins.

“It was interesting. For the majority of the year it’s been mostly upperclassmen playing and then a few freshmen coming in to help out; today it was a totally different situation,” Page said. “It was fun to watch them play well. … They deserve to get these opportunities.”

With the Bruins still missing their starting setter and libero due to injuries, freshmen Hagen Smith and Grant Chalmers filled in at those respective positions for the second straight game. Although short on experience, Smith and Chalmers bring another much-needed element to the lineup: raw energy.

“I think we always bring the energy; we’re just excited to make the most of our chances,” Chalmers said. “My focus could’ve been a little better, but I think we played well. It was my second start so I’m starting to feel more comfortable.”

One of the few veterans included in the starting lineup was senior outside hitter Gonzalo Quiroga, who took over the leadership reins as the only senior on the court. Despite stuffing his individual stat sheet with 15 kills, six digs and three aces, Quiroga credited the victory to the team’s passing overall.

“When we have perfect passes our setter can get everyone playing good,” Quiroga said. “We passed and served well today, and when we do those two things it’s really tough on whoever’s playing us.”

The Bruins now make the short trip from Stockton to Palo Alto, where they will face No. 9 Stanford in their first and only back-to-back of the conference season. An added amount of pride will be at stake on Monday night for the Bruins, especially the veterans.

“None of the guys on this team have ever won at Stanford, so that’s one of our mini-goals of the year – win at Stanford and also BYU,” Page said.

The drought goes back even further than this year’s veterans can remember; the Bruins have lost a total of six straight years up in Palo Alto, unable to bring home a victory since 2007.