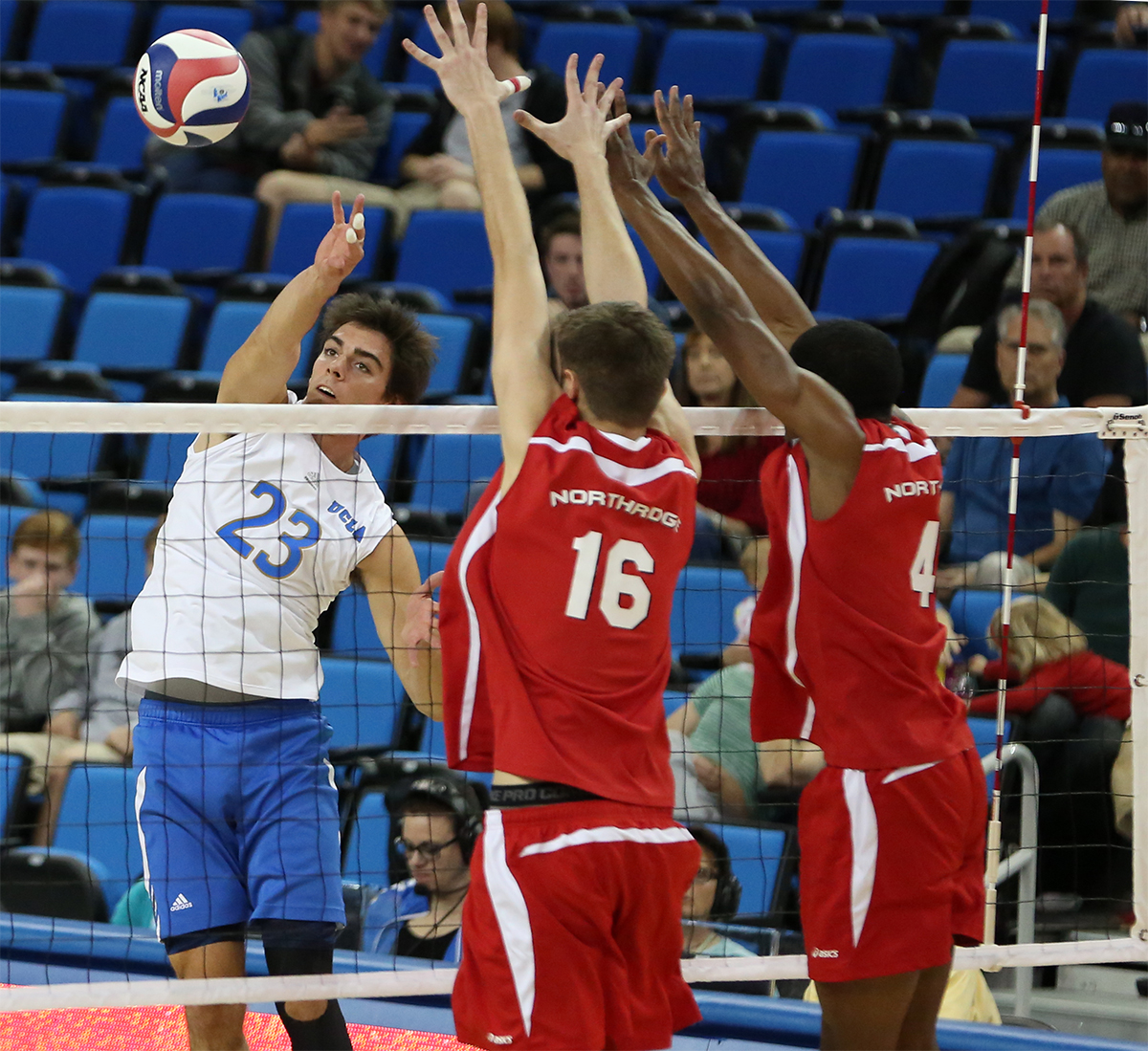 Senior outside hitter Gonzalo Quiroga delivered the final point in UCLA’s five-set victory over Stanford. Quiroga led all players with 21 kills and hit .333 for the match.
(Jose Ubeda/Daily Bruin staff)

As it came down to crunch time Monday night in Maples Pavilion, UCLA men’s volleyball needed one good play to help it clinch a five-set victory over Stanford. As the Bruins had done all night, they turned to senior outside hitter Gonzalo Quiroga, whose fiery play – 21 kills including four clutch aces – fueled the Bruins’ hard-fought effort.

After a strong serve from senior middle blocker Spencer Rowe was deftly returned by the Cardinal’s back row, freshman setter Hagen Smith calmly set Quiroga up for a monstrous kill that ricocheted off a Stanford player, leaving their formerly strong back line crumpled in defeat.

“We had a little mutual agreement that I was going to go to him regardless of where the ball was,” Smith said. “I had a lot of trust in him and I knew he could take care of it.”

No. 3 UCLA (13-3, 10-2 Mountain Pacific Sports Federation) took set five 17-15 to secure its second straight win over No. 8 Stanford (9-6, 6-6). The win marked the end of a successful road trip for the Bruins, who swept the Pacific Tigers in three sets on Sunday afternoon.

“We’re in a position where we could really learn a lot from that volleyball match,” said coach John Speraw. “I thought that was really nice for us to get into a tight one – we haven’t been in a five-setter since we played Stanford last time. That was good for us and obviously we came out on top, which was great.”

UCLA stuck with its new lineup over the course of the Northern California road trip, choosing to continue starting Smith and fellow freshman libero Grant Chalmers. Smith racked up 51 assists against Stanford to go along with the 32 he tallied in the game against Pacific.

“Whenever it’s high intensity, it’s close and it’s down-to-the-wire, that’s what I love the most, it’s when I have the most fun playing,” Smith said.

The Bruins don’t have time to celebrate, seeing as they leave for Hawaii on Thursday to take on the No. 11 University of Hawai’i Warriors in back-to-back matchups on Friday and Saturday.

“We’ve got to try and stay focused and make sure we all stay healthy – injuries have been a problem with us,” Chalmers said of the quick turnaround between road trips.

The Bruins had success in Hawaii earlier this season, when they went undefeated through three games – including a 3-1 win over the Warriors – to capture the Outrigger Hotels Invitational back in January.