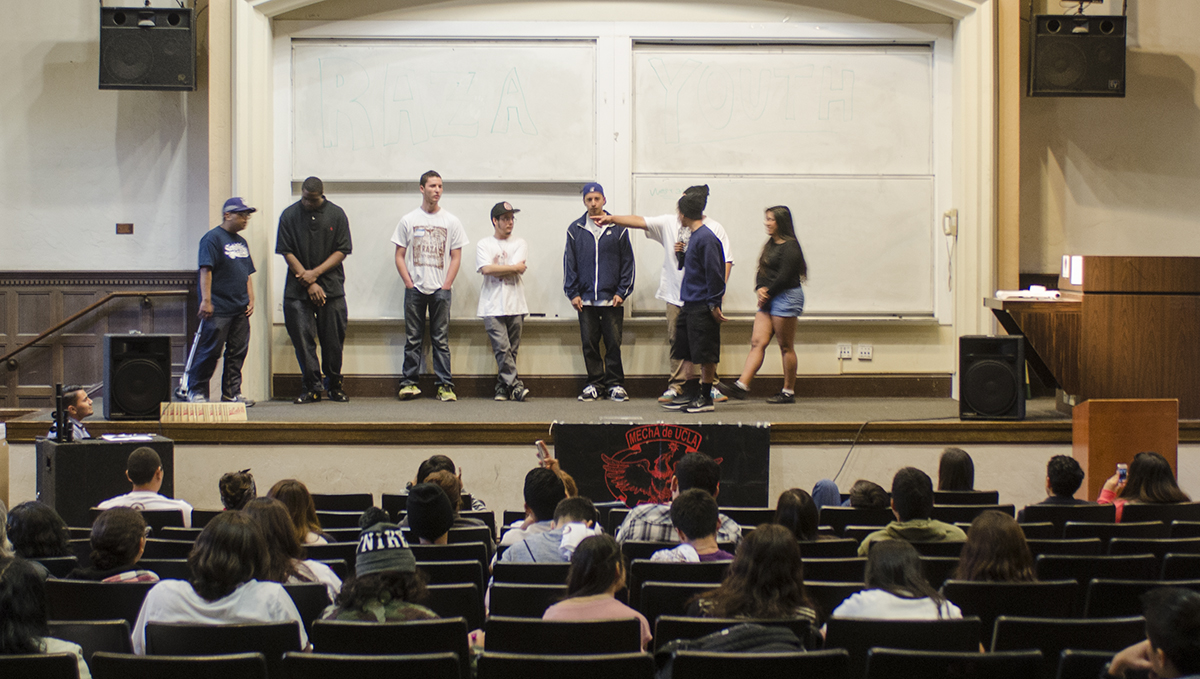 Students from all over Los Angeles filled UCLA’s Dickinson Court Saturday to encourage students of color to pursue higher education.

About 250 college and high school students gathered for the 21st Annual Raza Youth Conference to educate low-income youth about the importance of pursuing higher education. Middle school, high school and community college students were all invited to be a part of the conference hosted by el Moviemiento Estudiantil Chicano de Azatlan at UCLA, also known as MEChA.

The conference consisted of a series of workshops in both English and Spanish hosted by 50 UCLA students, alumni and external volunteers who gave a variety of presentations covering financial aid information, college requirements and ways to provide scholarships for undocumented students.

MEChA de UCLA started the conference in 1993 to encourage students of color to pursue a higher education and provide them with resources. In 1996, voters passed Proposition 209, which banned affirmative action in higher education admissions. The conference continued in response to the decreasing number of students of color going to college after the termination of affirmative action.

The group wanted to create an event that would provide students from low-income backgrounds with resources about college admissions and encourage students to attend college. The conference targets schools with disadvantaged students that don’t offer college-preparedness resources, such as a shortage of academic counselors. The conference also provides information to community college students who need guidance in transferring to four-year universities.

This year’s theme for the conference: “Paving the Way: La Causa Sigue,” was chosen in homage to the different student and civil rights movements that have paved the way for students of color to achieve a higher education.

MEChA de UCLA reached out to the Center for Student Programming, the Community Programs Office, the Chicano/a Studies Department and other student organizations for funds to pay for the conference, which cost nearly $8,000.

The co-chairs of the Raza Youth Conference, Jonathan Cruz, a third-year Chicano/a studies and English student and Alexandra Barba, a third-year sociology student, said they believe in helping and giving back to their communities through education.

Barba credits her high school teacher with encouraging her to pursue an education. Her former teacher, who was an immigrant, later obtained her citizenship and attended USC.

“I wanted to follow in her footsteps,” Barba said.

Cruz said his own journey toward a higher education prompted him to participate in the Raza Youth Conference.

As an undocumented student from Oaxaca, Mexico, he said growing up he often felt discouraged by teachers. He still chose to pursue community college once he realized it was an option for him.

“I’ve had educators tell me I wasn’t fit for college,” Cruz said. “I developed a mentality of inferiority.”

Among the students at the conference were members and leaders of the Black Panther Mentorship Project, a social justice youth leadership program at West Adams Preparatory High School in downtown Los Angeles that sponsors the Raza Youth Conference every year.

Johnny Ramirez, the project’s teacher advisor, is currently part of the Graduate School of Education and Information Studies at UCLA. Ramirez said the program tackles issues of environmental racism and the effect on the mental health of its students.

“The program re-engages students (who) have been pushed out of school,” Ramirez said.

Genesis Duenaz, a senior from West Adams Preparatory High School, said she was glad to come to the conference for the first time because of a panel about students interested in pursing a law degree.

Duenaz said she hopes to practice immigration law in the future, and that the conference helped her learn more about her options in the field.

After students completed the workshops, they clustered in small groups across the Murphy Sculpture Garden to discuss their personal experiences as Hispanic youth in relation to their academic goals.

Later in the day, Oscar De La Torre, the founder and director of the Pico Youth & Family Center in Santa Monica, spoke at the conference’s closing ceremony.

During his speech, De La Torre said that as a college student, he still experienced racial microaggressions from professors and peers. He added that the students should embrace their Hispanic and indigenous roots.

Though planning and finding funds for the conference this year was difficult, Cruz and Barba said they hope to continue their involvement in the event next year.

They added that they want to continue being culturally and politically aware of issues affecting Hispanic and Latino communities.

“We want to continue the cycle of giving back,” Barba said.

Correction: The name of Oaxaca, a city in Mexico, was misspelled.