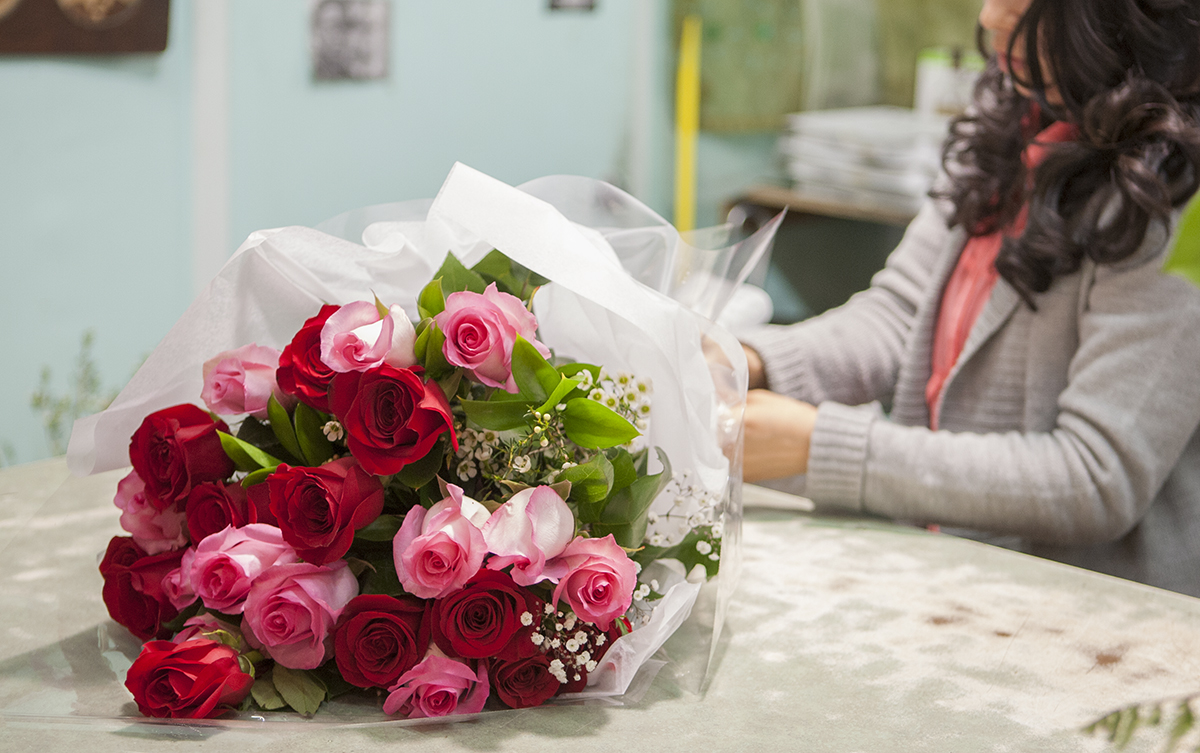 Upon entering Westwood Flower Garden, customers are greeted by a love ballad from the 1960s crooning through the speakers and the overpowering aroma of fresh flowers.

The staff buzz around behind the counter, occupied with last-minute rose stem trimming and bouquet wrapping in preparation for the store’s busiest 24 hours – Valentine’s Day.

During the week leading up to the holiday, a string of lights and red, pink and white flower bouquets lit up the storefront display on Gayley Avenue near Whole Foods Market.

Florists busied themselves with making customized Valentine’s Day-themed bouquets in addition to arrangements for special occasions such as birthdays, anniversaries and weddings. They also put together some UCLA-themed blue and gold flower arrangements.

“It’s a hectic week for us as we assemble plenty of Valentine’s Day-themed bouquets,” said Margie Warriner, who opened the shop in Westwood almost four decades ago.

When Warriner’s friend opened a floral shop for his girlfriend in Santa Monica nearly 40 years ago, she said she and her late husband, Bill Murray, were inspired to partner with them.

A few years later, Warriner and Murray decided to open theirown store in Westwood Village, where their business remains today.

Throughout the week leading up to Valentine’s Day, customers filled the store to pick up flowers. Some people choose to indulge in more extravagant declarations of love, such as proposing while standing in the center of a heart shaped rose petal arrangement, Warriner said.

Her favorite memory of working at the store is of a Valentine’s Day mishap – her husband selling a bouquet of roses stashed in the corner, unaware that a staff member had already bought them for his wife.

“I still remember … his wife was not happy!” Warriner said, laughing.

While many customers visit the store to pick up flowers for their romantic partners, others use the occasion to celebrate friendships or family relationships.

Anav Sanghvi, a first-year computer engineering student, is planning on using flowers to apologize to one of his friends.

“I usually buy flowers for my girlfriend. This is my first time buying flowers for a man,” he said, with a laugh.

Judy Luu, a first-year biochemistry student, said she is sending out bouquets to her family members.

“Valentine’s Day reminds me that I am surrounded by people that I care about, and I want to thank them for being in my life,” Luu said, clutching purple tulips in both hands.

Valentine’s Day invites people to take a chance and be explicit about their love. A sentiment Warriner related to when she decided to join the flower business.

“Take a risk, pursue what you want. That’s how I ended up in this business,” she said, gesturing at the dozens of bouquets that filled the shop behind her.