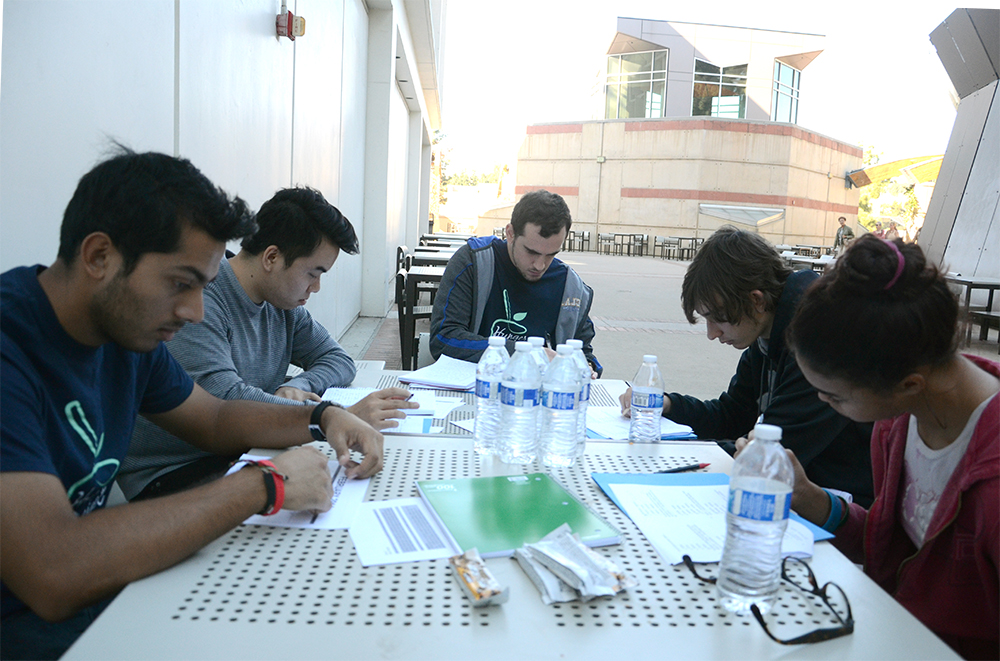 The high school junior wants a high test score so he can get into the college of his choice and achieve his goal of becoming a mechanical engineer.

His end goal is earning enough to financially support his mother, who works long hours as a nanny, and his brother, who is blind.

Students in the Hunger Project at UCLA, an organization represented by the Undergraduate Students Association Council Community Service Commission, aim to prepare students from high schools around Los Angeles every Saturday for the SAT.

The high school students study test-taking strategies, and, for the first time this quarter, they will learn how to craft personal statements and apply for scholarships.

The project has also begun tutoring students from Helen Bernstein High School in Hollywood this quarter, along with students from two other sites.

At the Ackerman Union patio on Saturday, 14 high school students gathered and took short practice exams, reviewed results from a diagnostic SAT exam they had taken the previous week and paired up with mentors who scheduled personalized study plans with them.

The tutoring session commenced with a 25-minute practice essay. After students read through the prompt, pensive looks quickly turned into determined gazes, and a flurry of scribbling began.

The Hunger Project at UCLA, founded in 1987, has historically focused on food service projects.

However, group members decided to make education a key component of the organization’s focus at the beginning of this school year, said Xuan Dang, a fourth-year molecular, cell and developmental biology student and co-external executive of the project.

“I really want to promote (education) because I know many kids who are economically disadvantaged, but have the potential to be great leaders and make a positive impact in the community,” Dang said. “But they need to be given the opportunities first.”

Nick Vincent, a second-year electrical engineering student and tutor, said that while many students initially came into the program with minimal preparation for the SAT, he thinks they can now tackle more complex questions.

“By the end of the quarter, students would ask me a question, and other students would chime in and start teaching it themselves,” he said, laughing.

Thomas Luong, a UCLA alumnus and SAT adviser for the Hunger Project at UCLA, said he thinks students from disadvantaged backgrounds sometimes lack strong college counseling programs and tutoring services, which can deter them from pursuing a college education.

Luong said he joined the Hunger Project because he knows what it’s like to struggle growing up.

“My mom worked in sweatshops around the Los Angeles area,” Luong said. “Before we were in kindergarten, we would help her prepare clothes by gluing labels to the clothing.”

Luong said he wants to motivate high school students in the project to be proactive about their education and hopefully give back to their communities one day.

“Going to college allowed me to see outside the bubble of poverty,” Luong said. “Now I have a perspective of where I stood, and know what I can do to change things.”

Pesjaka is also working toward change so he can provide financial stability for his current family and any children he may have.

“If I do have my own family, I want my kids to have the stuff I never had,” he said.

While Bruce Daniel Crane attends tutoring for two hours, his father and younger brother wait at Kerckhoff patio and read.

The family commutes to UCLA every weekend on the bus, but Bruce Crane said he thinks the time and travel are worth it.

“I would be extremely proud if he got into college,” Bruce Crane said. “There would be fulfillment in my life as far as my role as a father to see him achieve that.”

For Pesjaka, Crane and other students, the SAT tutoring service that the Hunger Project at UCLA offers is one of the few free test prep options out there that they know of.

Some of the high school students said they would have to pay at least a hundred dollars for other programs if they could not receive free tutoring from the project.

Dang said she thinks that while some parents have the resources to help improve their children’s SAT scores, those from low-income backgrounds do not always have the same options.

“Even if students want to pursue higher education, (the SAT) could be the door that shuts them out,” Dang said.

At the end of Saturday’s tutoring session, after the noisy bustle of the students subsided, Pesjaka said he feels he has improved on some sections of the test.

“I’ve never stopped trying, and I’m not going to stop now,” he said.