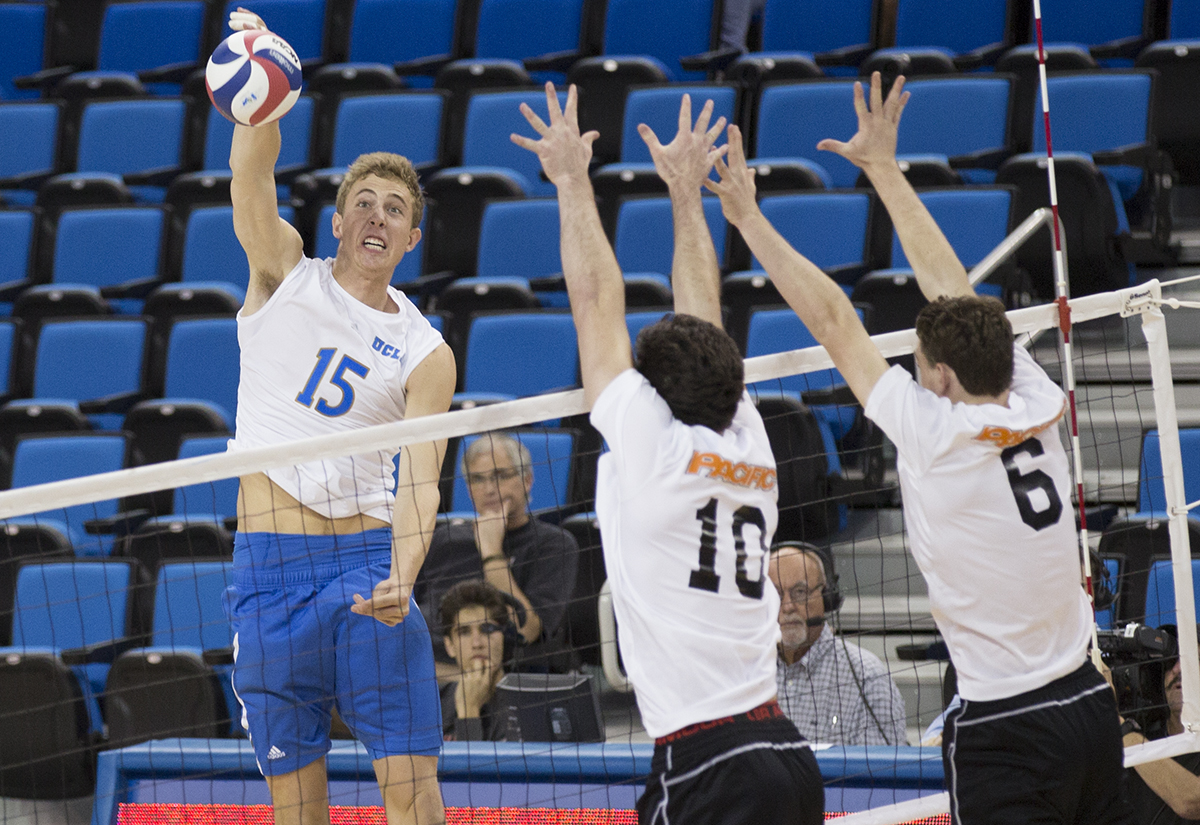 Senior outside hitter Robart Page followed up a career-high 26 kills against Stanford with a 14-kill performance against Pacific.

Cardinal T-shirts were sprinkled among the usual light blue gear present in Pauley Pavilion Friday afternoon, a sure sign that rivalry was in the midst. This time, it wasn’t a crosstown contender, but coastal rival Stanford set to challenge UCLA men’s volleyball.

After back-and-forth sets to open the match, the game came down to the fifth set in a victorythat saw the Bruins hand defeatto the then-No. 1Cardinal by a score of three sets to two.

Tensions ran high throughout each set, with the raucous crowd of UCLA students jeering at the men clad in black – calling the Cardinal out on everything from their choice of socks to the length of their shorts.

The intensity of the match was exemplified by sophomore setter Steve O’Dell crying “Engage!” before every Stanford serve.

“It’s a Call of Duty reference,” O’Dell said. “They’re all around us, the enemy. So when I say ‘engage,’ we’re attacking.”

The Bruins did just that after a slow start saw them drop the first set 25-23 and then bounce back to take the second and third sets and then clinch the win with a 15-11 fifth set.

“They were patient, they were poised and they just kept getting a little bit better as the match progressed,” said coach John Speraw. “We’re in a real nice position here because we got a win versus a very good team early in league.”

One of the most poised players was senior outside hitter Robart Page, who had a career-high 26 kills in the match against Stanford, one of which sealed the Bruins’ win in set five and secured UCLA’s upset win.

“We had a little jitters for the first home game,” Page said. “Then we kinda settled a little bit and started making plays. … We have a lot more (games) to go. Every team we meet is good so it’s going to be a long road. “

UCLA’s rank jumped from No. 6 nationally to No. 3 Monday after a successful weekend of conference play in which the Bruins also beat the Pacific Tigers 3-0 to move to 5-1 on the season.

“From now on, it’s just win every single game we can,” said senior outside hitter Gonzalo Quiroga. “I think we need to get a lot better and there’s a lot of things we can improve on, but I think we started the season in the right way and so we’re looking pretty confident.”