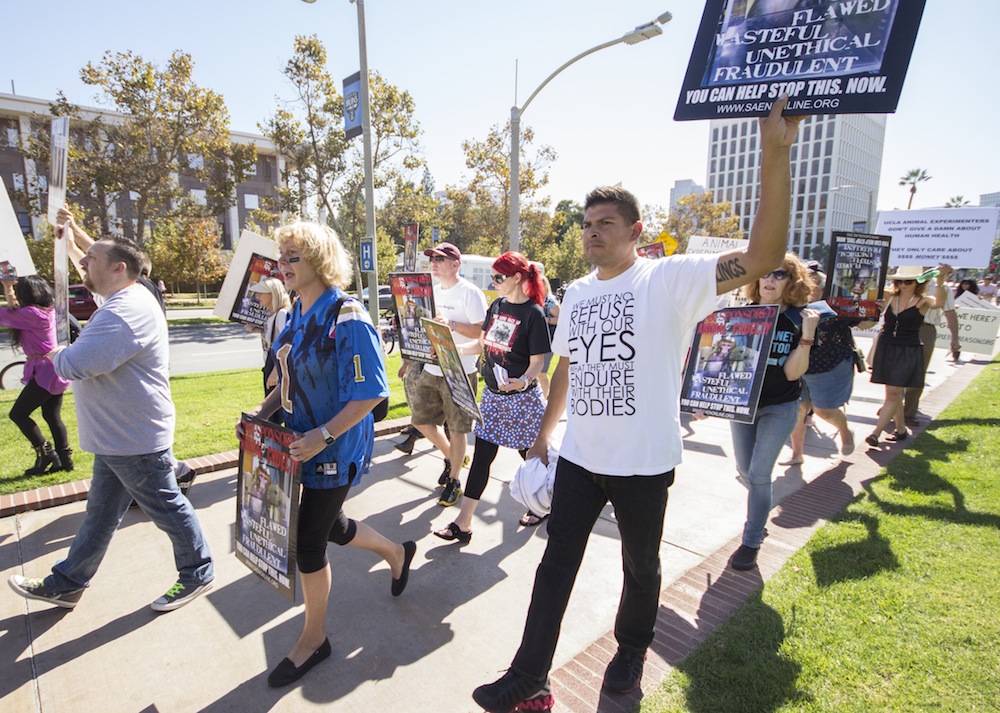 Stop Animal Exploitation Now, the organization currently suing the UC Board of Regents for refusing to release records, protested UCLA animal research in Westwood in October. Protests by animal rights groups are a common occurence at UCLA.

David Jentsch understands how risky animal research can be.

On a Saturday morning in March 2009, the UCLA psychology professor found his car set ablaze at his private residence by members of the Animal Liberation Frontsee, an extremist animal rights group.

The incident was the tenth arson committed against UCLA researchers over a three-year period. In a 2010 lawsuit, the Los Angeles Superior Court found a causal connection between the release of animal research records and this type of attack against faculty.

The violence also caused UCLA to adopt a policy of almost total non-disclosure of research records in order to protect faculty.

The university’s hard line on records requests pertaining to animal research explains why Stop Animal Exploitation Now, a plaintiff in the 2010 case, filed a lawsuit last month against the UC Board of Regents, requesting a number of veterinary records be released to the public.

The lawsuit calls for the disclosure of daily care logs, necropsy reports and all pictures taken of the primates since January 2012. This request is too much to demand of the university, and Stop Animal Exploitation Now has already been denied the records in a previous lawsuit.

It is clear that UCLA should consistently seek to protect their researchers in every way possible, but UCLA must also be held accountable to provide evidence of proper treatment of their animals. UCLA should not let the actions of a few extreme organizations dictate their policy about releasing records in general. Different records contain different types of information, and UCLA should be more forthcoming with records that do not put its researchers at risk.

To strike this balance, UCLA should continue to refuse to disclose information such as detailed necropsy reports and photos taken of primates, but should release records that do not reveal information which identifies faculty.

Necropsy reports are essentially autopsies done on the primates after they have been euthanized, while daily care logs include descriptions of the material conditions and environment the animals are living in, but are much less formal and in-depth than necropsy reports.

These logs include enough information to describe how the animals are being taken care of. In an interview last week, Jentsch said information that puts researchers at risk is much easier to remove from care logs than is the case with an incredibly detailed necropsy report.

This solution enables the university to redact all information that could harm professors, but also reveals enough to give the public an idea of how non-human primates are treated in university labs.

Michael Budkie, the executive director of Stop Animal Exploitation Now, argues that anyone can know who is doing animal research at UCLA by looking at medical databases.

But these databases contain different information than what can be found in necropsy reports, which include detailed locations and data which expose the researchers. This information cannot be redacted without making the analysis useless.

“For (necropsy reports) to be accurate or scientifically useful they need to be so full of facts, details and locations that redacting this information would give you no documents at all,” said Jentsch.

Clearly, then, UCLA cannot be expected to hand over reports that, in order to be useful to Stop Animal Exploitation Now, could be used to harm faculty. Daily care logs differ in that information which could put researchers in harm’s way can be redacted without sacrificing as much of the substance of the report.

UCLA has no way of knowing Stop Animal Exploitation Now’s intentions, so the university should be skeptical of disclosing this sort of information. But a willingness to play ball with animal rights organization would help the university be more transparent with the public regardless of the activists’ motivation.

Correction: The first sentence of this column was not uploaded and the meaning of the second sentence was grammatically unclear.