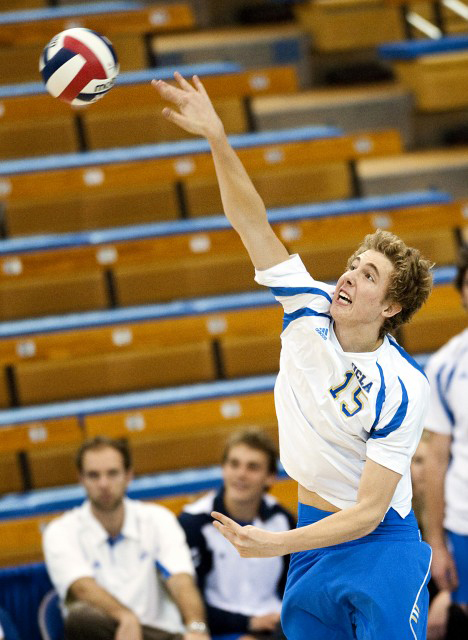 Senior outside hitter Robart Page led the Bruins to a tournament title over the weekend. Page was also named the tournament’s most outstanding player.

UCLA men’s volleyball came out swinging in the team’s last opportunity for improvement before conference play opens this weekend.

The Bruins captured the first set of every match they played over the weekend at the Outrigger Hotels Invitational, setting the tone for a dominant performance that culminated in their 3-1 win over the Hawai’i Rainbow Warriors Saturday to claim the tournament title.

The closest margin of victory in a first set came against Hawai’i, with UCLA winning 25-19. The Bruins dominated tournament play, with a five-set win over the No. 11 Penn State Nittany Lions, a three-set sweep of the No. 12 Ohio State Buckeyes and finally a four-set victory against the No. 14 Rainbow Warriors.

Now No. 7 UCLA (3-1) returns from Hawaii a different team from the one that departed after an unexpectedly unsuccessful UCSB Asics Invitational the weekend before. While the narrative of that tournament centered around inconsistency, the team’s theme has shifted to one of execution.

“The execution of the game plan was the best thing we did all weekend,” said redshirt sophomore middle blocker Trent Kersten. “We executed our game plan, we came in and we had great first sets in all of our matchups this weekend.”

Despite going undefeated in Honolulu, not all the victories came easily. Penn State gave UCLA a run, forcing the Bruins to outlast the Lions over five sets, while the Buckeyes succumbed in only three.

“Each of these teams did some different things that were unique,” said coach John Speraw. “I think we did a real nice job of adapting and our execution of game plans was quite good for this time of year.”

Sophomore setter Steve O’Dell and senior outside hitters Robart Page and Gonzalo Quiroga were named to the all-tournament team, with Page also garnering Most Outstanding Player honors. Page leads the team on the season in attacks, kills and digs .

This invitational championship win could not have come at a better time for the Bruins, who open conference play against No. 4 Stanford Friday night in Pauley Pavilion.

“It’s more about the process than this victory,” said senior middle blocker Spencer Rowe. “I don’t think win or lose we’re more or less confident – we’re just excited that we know the things we need to get better at.”