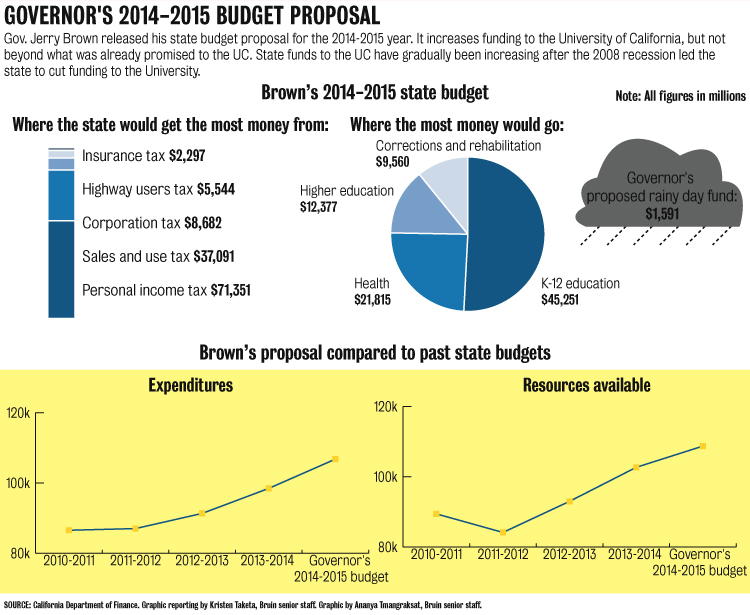 Governor Jerry Brown’s proposed budget for next year would increase state funds to the University of California, preventing the need for tuition increases, but is still below what the UC had hoped to receive.

Brown allocated about $2.99 billion to the UC in his proposal, a 5 percent, or $142 million, increase to the UC general fund from the 2013- 2014 budget. The proposal came in $120.9 million short of what the University of California Board of Regents had asked for in a November press conference.

If passed, this budget will mark the third year in a row that the UC has seen an increase in state support. Brown spoke about the budget in a Thursday morning press conference that was pushed a day early after the budget was leaked in the Sacramento Bee Wednesday. He stressed that the UC should keep working toward making education more affordable for students.

“(The) UC appreciates Gov. Brown’s commitment to full funding for the second year of his multi-year budget plan for the university,” said UC Vice President for Budget and Capital Resources Patrick Lenz in a press release. He did not mention that the budget proposal did not match what the UC had asked for.

The budget for the total state general fund increased 8.5 percent from the last fiscal year. An increase in corporation and personal income tax and a $4.2 billion surplus allowed the budget to grow, said Brown in the press conference. Brown said the emphasis in his budget, in addition to education, is paying off the debt and strengthening health care and public safety.

“(The budget proposal) is well-balanced,” said William Yu, economist for the Anderson School of Management. “It focuses more on education, as the total share of the resource on education is increasing.”

Yu said the increased focus on education will free students from a tuition increase that has been a common occurrence.

“At least, students can take a break for the next few years,” Yu said.

The plan was contingent on the regents’ decision to not raise tuition this year and the passage of Proposition 30, which raised the income tax on individuals earning $250,000 or more and increased the state sales tax by a quarter of a cent. UC President Janet Napolitano said in November that the UC is aiming for a tuition freeze for the 2014-2015 academic year as well.

The regents said in November that the additional increase in funding, on top of the scheduled 5 percent increase, is necessary to pay for the University’s pension program and a modest increase in systemwide enrollment.

Brown, however, said in the press conference that he wanted to emphasize restraint.

“The state has just emerged from the largest recession since the Great Depression, and its finances remain constrained,” Brown’s proposal stated. “The state must continue to rebuild its universities’ budgets, but only in a manner that is sustainable over the long term.”

Brown’s plan for funding the UC did not change because the regents requested more funding, said Paul Golaszewski, principal fiscal and policy analyst for the Legislative Anslyst’s Office.

Brown said the goal of his proposal is to increase the four-year graduation rate for students, instead of focusing on enrolling as many students as possible.

“(The proposal) helps them in two ways: by holding tuition flat and by encouraging universities and colleges to enable students to get through within four years instead of a much longer period that seems to be an order today,” Brown said.

According to the proposal, starting March 2014 the UC and California State University will be required to report on their progress toward improving affordability and reducing the time for students to complete a degree.

The proposal includes a one- time, $50 million state allocation to the Awards for Innovation in Higher Education program, which significantly increases the number of individuals receiving bachelor’s degrees and makes it easier for students to transfer and graduate in four years.

The proposal also includes an increase of $107 million for middle class scholarships, which will provide up to 40 percent tuition assistance for those with incomes up to $150,000. Funding for the program is scheduled to be increased up to $305 million in the 2017-2018 fiscal year.

Also, $103.3 million was set aside to accomodate an increase in the number of students who participate in the Cal Grant program next year. The increased number of students could be partially due to the start of the California DREAM Act last year, said Judy Heiman, principal fiscal and policy analyst for the Legislative Analyst’s Office.

UC said the increase in state funding will prevent any tuition increase in the 2014- 2015 school year.

State Assembly Minority leader Connie Conway said in a statement that she worries the Democratic supermajority in the state house and state senate will push for more spending than Brown intended.

“California has seen unex- pected spikes that have evapo- rated overnight,” Conway said. “Now is the time to … avoid the budget mistakes of the past and invest in our future so that our economy grows.”

Brown will release a revised version of his budget in May, and legislators have until June 15 to pass a state budget.

The Legislative Analyst’s Office will release its analysis of the proposal in upcoming weeks, Golaszewski said.

The regents will convene at UC San Francisco from Jan. 21-23 to discuss the governor’s budget proposal and outline their demands for the final budget.