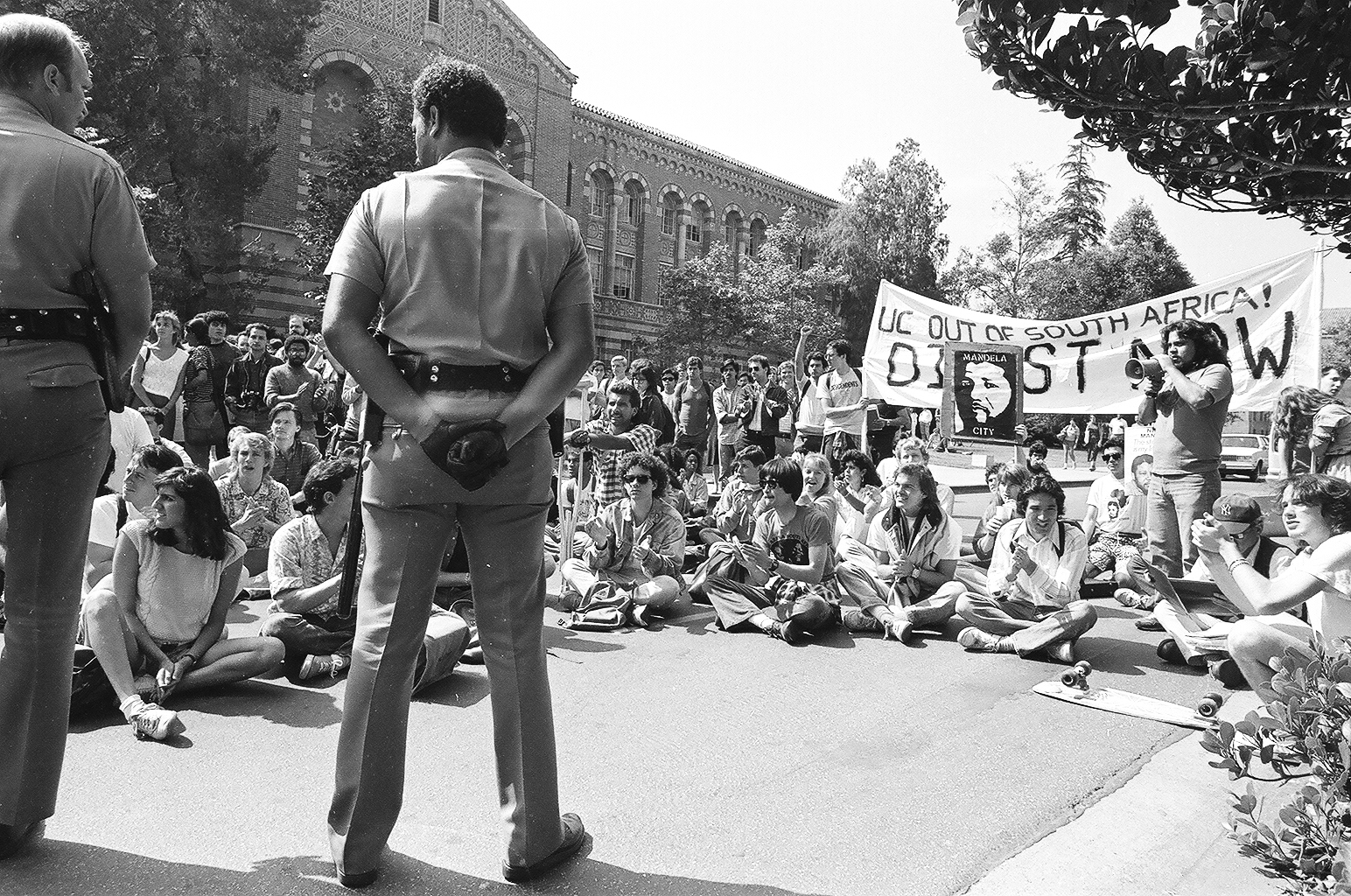 On Apr. 24, 1986, anti-apartheid protesters gathered on campus to urge the UC Board of Regents to divest from South Africa. Above, police face a crowd of students, one of whom is holding a sign with Mandela’s face on it.

At the time Kathleen Sheldon started graduate school at UCLA in 1975, it seemed Nelson Mandela would never get out of prison.

As Sheldon and a group of campus activists sought to make the South African government an international pariah, Mandela toiled away in an island prison – a visionary moral leader reduced to breaking rocks in a labor camp.

“I had the feeling that the South African (government) would never want him out alive,” Sheldon said.

Fifteen years later, accompanied by her husband and two children, she watched the newly freed Mandela speak at the Los Angeles Coliseum.

In the crowd were people with whom she had fought against the grotesque crime of South African apartheid, caught up in the same effort that had put Mandela behind bars for 27 years.

“Even though it was a huge audience, so many people were there we’d worked with over the years,” Sheldon said.

The struggle against racial segregation in South Africa inspired multiple generations of UCLA students and professors, putting flint to tinder on a campus that was already primed to fight injustice.

Much more than a narrow, localized conflict, the anti-apartheid movement was a catalyst for activists to unify against oppression in all its forms, not least of which was the still-lingering specter of racism in the United States.

In that fight, UCLA found its moral center. That’s the debt we owe Nelson Mandela.

Ironically, the same government that put him in prison also helped export the anti-apartheid movement to UCLA. The limited opportunities for blacks to get an education in South Africa meant many young people went abroad to study, and UCLA more than any other institution became a haven for them, said William Worger, a UCLA history professor.

Those students brought their struggle with them. One expatriate who ended up at UCLA, Tim Ngubeni, was the featured speaker at an Occidental College anti-apartheid rally that President Barack Obama on Thursday called his “very first political action.”

Like every person who participated in the anti-apartheid movement, Obama was a student of Mandela. By that standard, Mandela had as many students at UCLA as any professor here today.

In the spring of 1985, for example, students erected a tent city in Schoenberg Plaza to pressure the University of California Board of Regents to divest from the Pretoria government. They named the impromptu village “Mandela City.”

A year later, a crowd of anti-apartheid protesters surrounded and occupied a campus building, wielding signs with Mandela’s likeness. One protester extemporaneously declared the building “Winnie Mandela Hall,” after the imprisoned leader’s wife.

Of course, not all students were quite so engaged. A Los Angeles Times article from the event bemusedly made note of a job interview between a suit-clad student and a pair of recruiters taking place outdoors. The interview had been scheduled to take place in the occupied building.

Today, we can sympathize with that student, persistently going through with his job interview. It’s hard to care what goes on outside of our borders when the threat of postgraduate unemployment lurks around the corner.

The pervasiveness of moral apathy makes it all the more remarkable that Mandela, from the farthest tip of a distant continent, touched off a movement that had a profound impact here at UCLA.

To boil down Mandela’s legacy to any one, pithy moral edict would be a gross oversimplification. We can only hope to see with the same moral clarity as he did, or at least for leaders like him to open our eyes when we don’t.