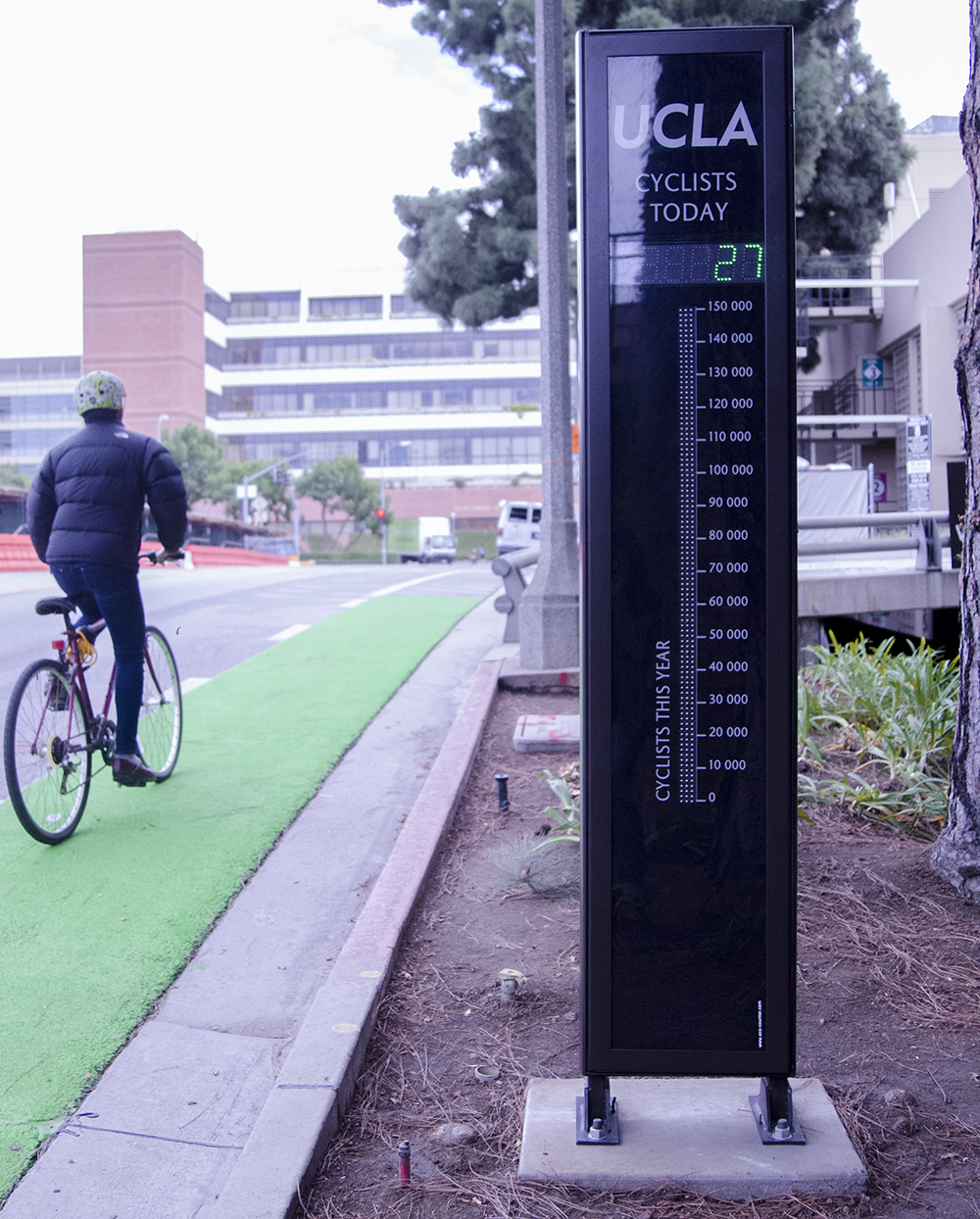 The bike counter on Strathmore Drive is the first in Southern California, and is the only one installed on a college campus in the country.

Located between an overpass and the intersection of Westwood Plaza and Strathmore Drive, the device is one of few active bicycle counters in the United States, said David Karwaski, senior associate director for UCLA Transportation Planning, Policy and Traffic Systems.

The device, which cost about $20,000, is intended to collect data on the amount of cyclists who use the Strathmore Place bike lane and to let cyclists know that they are not alone by displaying the data, Karwaski said.

The Green Initiative Fund, which collects a $4 quarterly student fee from the student body to pay for sustainable programs, financed a majority of the project and UCLA Transportation covered the final cost to install the counter, Karwaski said.

A bike counter is a pillar-shaped machine that records and broadcasts the number of cyclists that ride past it each day. The counter adds each daily cyclist total to a yearly count which is displayed as well.

A diamond shaped magnetic rod, which is built into the bike lane and connected to the counter, detects and counts cyclists as they pass over it, Karwaski said.

The device made its first counts at the event when 18 cyclists ceremonially rode down the Strathmore bike lane.

At Friday’s event, Bartrosouf asked a crowd of about 40 bike supporters and transportation staff to sign a petition calling for more bike lanes in Westwood.

Members of the UCLA community spoke about the counter’s ability to change the local mentality about transportation.

“Just having the bike counter here sends a message about the importance of cycling and the legitimacy of cycling,” said Michael Goldstein, associate vice provost of the Healthy Campus Initiative and a professor of public health and sociology who spoke at the event.

About a year ago, Karwaski and Mike King, UCLA Transportation’s active transit planner, were inspired to push for the device on the UCLA campus by an Amsterdam website displaying bike counters.

A website has been put up that archives the data the counter collects in real time. The website can be found at ucla-strathmore-bike-counter.visio-tools.com.