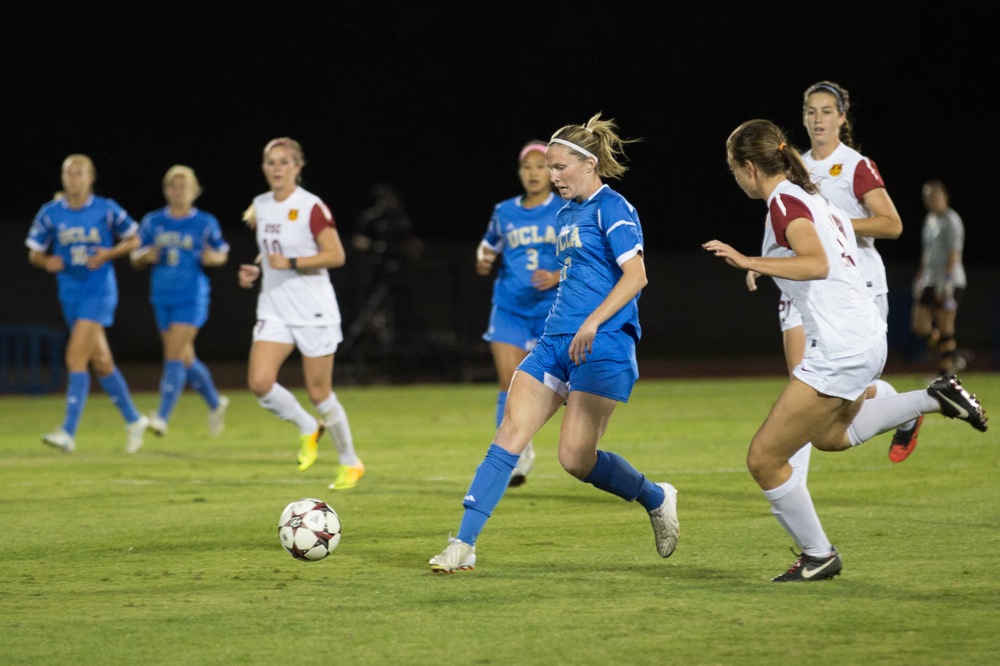 Senior midfielder Jenna Richmond said the Bruins are looking forward to getting a clean slate in the playoffs after getting a No. 2 seed in their NCAA tournament bracket.

Sarah Killion doesn’t need her own pair of ruby slippers to know that there’s no place like home.

The junior midfielder said playing in Drake Stadium and not needing to deal with traveling will give the UCLA women’s soccer team a physical and mental edge – something it hopes to utilize in its postseason games.

Since UCLA was allocated the No. 2 seed in its bracket of the NCAA tournament, it is only guaranteed three home games, should it advance that far. The team will have to relinquish that advantage if it meets the bracket’s No. 1 seed, North Carolina, in the quarterfinals.

The NCAA’s decision not to award the Pac-12 champions, who are also ranked No. 2 in the nation, one of four No. 1 seed allocations was an unexpected one, according to coach Amanda Cromwell.

“We’re a bit surprised not to be No. 1, but we knew anything happens in a selection show,” Cromwell said.

The team will play its first NCAA tournament game today at 7 p.m., and it will be against a team the Bruins have some history with – the San Diego State Aztecs.

This will be the third time the Bruins play the Aztecs in two years. Despite the Bruins emerging 2-0 and 3-0 victors in their previous encounters with the Aztecs, senior midfielder Jenna Richmond said when it’s win or go home, past results don’t matter.

“It’s the first game that we have to focus on. Everyone has a clean slate starting this NCAA tournament, so we’re just really excited to get this show on the road on Friday,” Richmond said.

Though the team has the ultimate goal of 110, UCLA’s next national championship in mind, junior midfielder Sam Mewis said right now it’s all about focusing on the task at hand and not getting carried away with thinking about the final destination.

“I think that (winning the national championship has) been our main goal the whole time, and I just think at this point if we overlook things, that will be a hindrance. … We have to play well (today) and that’s the most important thing,” Mewis said.

Since Monday’s selection show, the team has had time to cast its disappointment over not getting top seeding aside.

Killion said what the Bruins now need to do is concentrate on following the yellow brick road the NCAA has laid before them on the way to the College Cup.

“Initially we were a little upset with the fact that we didn’t get a (No. 1) seed,” Killion said. “At the end of the day, you play the same amount of teams, and you hope to win six games. We’re just going to take it game by game, one game at a time and focus on what’s right in front of us.”