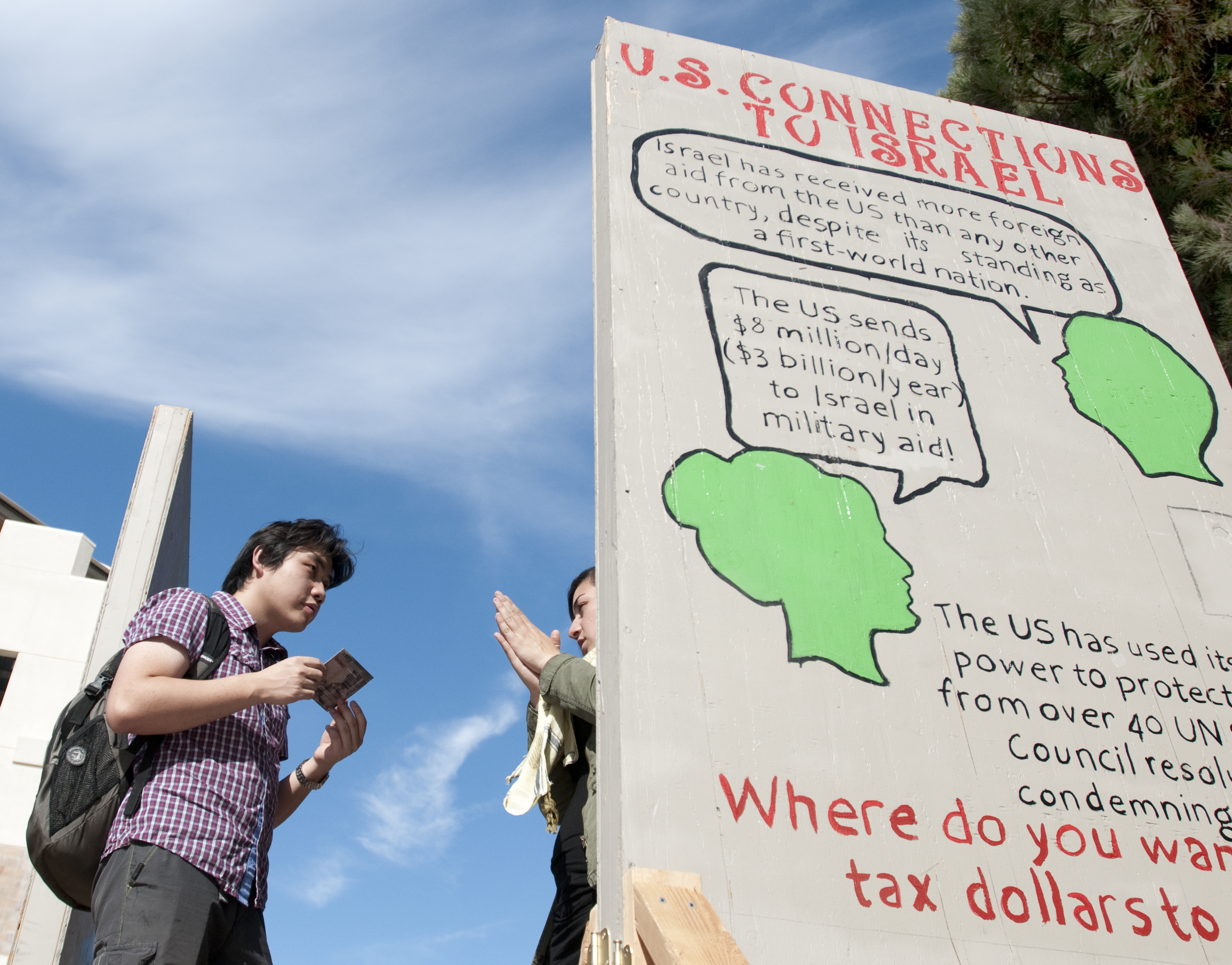 Jiayin Guo, a graduate student in mathematics and Dana Saifan, the president of Students for Justice in Palestine at UCLA and a fourth-year psychology student speak behind the mock “apartheid wall” put up in Bruin Plaza which represents the controversial separation barrier that borders the West Bank.

Israeli and Palestinian advocates on campus are not camera shy.

Much of the conversation about the conflict at UCLA manifests in a very public manner. Each year, the Daily Bruin receives numerous submissions from active students, each followed by a flurry of online comments.

Another yearly phenomenon is the emergence of student government resolutions addressing the conflict. Two weeks ago, a resolution calling for investment in joint Israeli-Palestinian ventures led to an emotionally charged barrage of public comments, in one of the longest, most-attended Undergraduate Students Association Council meetings in recent years.

But the public display is never more prominent on campus than this week – Palestine Awareness Week. From Monday to Thursday, Students for Justice in Palestine erected a mock “apartheid wall“ in Bruin Plaza by day, meant to symbolize the separation barrier that borders much of the West Bank, and hosted a variety of relevant events at night.

Bruins for Israel has also been active on campus this week, tabling on Bruin Walk and hosting a debate between Bruin Democrats and Bruin Republicans.

It seems to be an immutable law that for every protest, there exists an equal and opposite counter-protest. For every submission, a counter-submission.

Resolutions, publications and protests are not productive means of sparking mutual trust and conversation. Rather, they allow students to avoid doing the hard, often uncomfortable work of looking their “opponent” in the eye and actually listening to what they have to say.

Unregulated yelling matches and online comment wars, by their nature, abide by a mob mentality. They have turned the Israeli-Palestinian conflict into a spectacle, a never-ending loop of the same recycled arguments.

Miriam Eshaghian, a fourth-year psychobiology student and president of Bruins for Israel, said a dialogue would be helpful to the campus climate, as long as no group feels attacked or demonized.

It is definitely understandable that students would want to feel respected and acknowledged before entering into a conversation.

But sometimes hearing the “other side” is fundamentally uncomfortable, even insulting. And it should be.

Students should not be afraid to enter a conversation without conditions, without accommodations. If campus advocates have strong conviction in their beliefs, they should not avoid hearing words or ideas that contradict their preconceived notions, even if these ideas seem threatening.

This kind of vulnerability on either side is not likely to emerge in the public arena, where students have the added pressure of not seeming like a traitor or sympathizer in front of passersby on Bruin Walk.

Another obstacle to dialogue in a private, rather than a public, setting is that students may not want to talk or are afraid to be vulnerable on a face-to-face basis.

Rahim Kurwa, a graduate student in sociology and vice president of Students for Justice in Palestine, said Bruins For Israel has not approached him or his group personally.

But Bruins for Israel, while refraining from reaching out directly to the Students for Justice in Palestine, called for dialogue in a recent Daily Bruin submission. But op-eds and USAC resolutions are public venues, so these invitations for dialogue too often sound like personal attacks.

Campus advocates for Palestine have imposed conditions on any kind of interaction, for fear that it would otherwise become oppressive. But labeling a conversation as oppressive before it has even begun prevents the mere possibility of progress. Conversation must precede concessions.

When Palestine supporters create conditions to conversation, and when Israel supporters vilify them for doing so, both sides alienate students who might be legitimately willing to listen and even make concessions.

And they magnify this alienation when they make these statements publicly.

Talking to people whose opinions, experiences and values fundamentally challenge you to the core, and listening before you speak – that is hard.

And the only way to spark tough conversations is to take it off the page, off Bruin Walk and away from the pressures of public performance.

Send general comments to [email protected] or tweet us @DBOpinion.