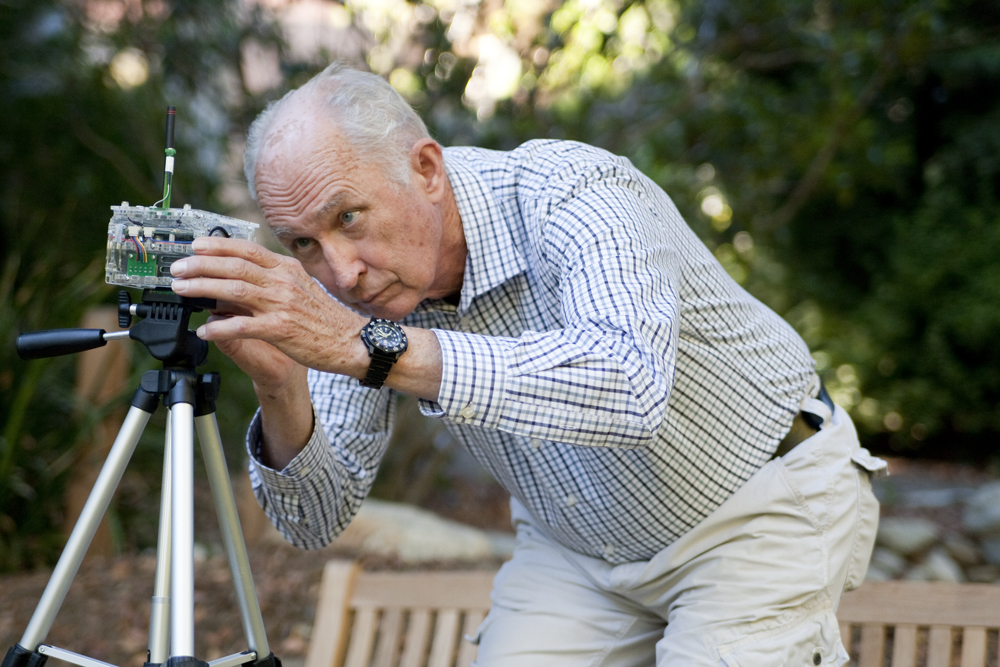 Charles Taylor, a professor in the department of ecology and evolutionary biology, wants to identify what birds are trying to communicate through their songs.

Charles Taylor played the complex, croaky, squawky birdsong of a scrub jay, an aggressive bird that eats bird eggs and young hatchlings. Within 30 seconds, three birds flew from different trees in the Mildred E. Mathias Botanical Garden tucked in the corner of UCLA.

“They’re alarmed. They’re coming to check it out,” Taylor said while gesturing up at the birds.

Taylor, a professor in the department of ecology and evolutionary biology, and his team listen to hundreds of birdsongs every year, trying to characterize different phrases in the songs. Taylor said he hopes to identify what birds are trying to communicate when they sing.

“If we understand what birds are saying, then we have a window into their mind,” Taylor said.

So far, Taylor and his team have identified groups of phrases that birds typically use together in songs. By identifying the structure of birdsongs, they may be able to influence bird behavior. They focus their research on five species of birds from Australia and North America.

About 15 years ago, Taylor became interested in the devices used to record birds. Although his career was based in technology, he was fascinated by working directly with animals.

Taylor places dozens of specialized recording devices in different areas of the woods, jungle and desert to localize the sounds coming from different birds.

He hopes that eventually, the devices can be improved to work in real time and respond to what the birds are saying in order for researchers to be able to influence and study bird behavior and how birds respond to certain signals.

Taylor uses the devices in places as close as the Santa Monica Mountains to as far as the Mexican jungle bordering Guatemala and the outback of Australia.

Eight years ago, Taylor and Martin Cody, a professor emeritus of ecology and evolutionary biology, began a research project to periodically visit Mexico to take bird recordings over the course of about five years. Because the devices at that time contained hundreds of meters of wires, they had to carry the devices in wheelbarrows across the jungle in Mexico.

On his trip, Taylor crossed a river filled with crocodiles and narrowly escaped a poisonous snake bite.

“There are moments when my adrenaline got going … not just by seeing the sight of a beautiful bird,” Taylor said with a laugh.

Taylor and Cody have traveled together to Australia as well , collecting bird recordings and sharing skills with each other.

“We’re a pretty good team,” Cody said. “There’s lot of things I don’t understand that he understands well, and vice versa. Our knowledge complements each other very well.”

Taylor and Cody traveled to Australia in September to obtain recordings from native birds and compare their dialects to those of birds in North America.

The different dialects birds learn while growing up affect the birds they choose as mates later on, Taylor said.

Taylor said the birds may also employ a structure in their songs. For example, certain phrases are more common in the beginnings and endings of songs.

Taylor and his team are working to identify patterns in complex bird songs, such as the subject-verb-object sentence structure in the English language.

“The most similar system (to human language) is birdsongs,” said Richard Hedley, a graduate student who is studying the songs of the Cassin’s Vireo bird in Taylor’s lab. “It’s the only analog of human language where you can get a complex sequence of sounds.”

Taylor hopes that by studying birds and using the recording devices, he can also study the nature of bird minds.

The next step is to observe the birds while recording them in order to see what they are doing when they sing different phrases, Taylor said. For example, the team is interested in seeing how bird singing changes in different situations, such as when there’s a predator like the crow or scrub jay nearby.

Only one bird flew into a nearby tree in UCLA’s botanical garden when Taylor played the song of a mockingbird, a bird that is less predatory than a scrub jay.

“Our expectation is birds will say different things when there’s a scrub jay around or not,” Taylor said. “We’ll make comparisons and hopefully we’ll find something.”