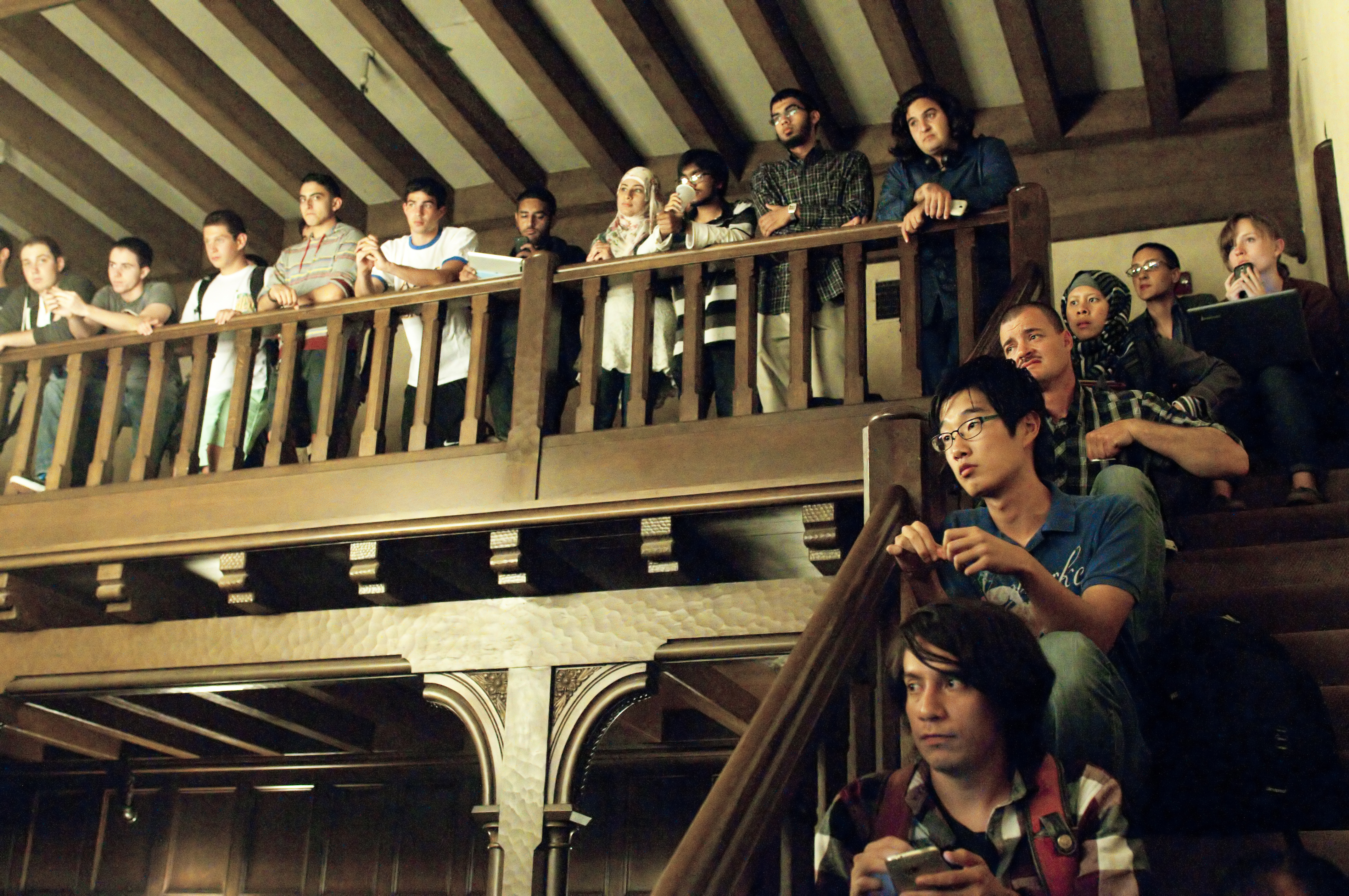 More than 100 students attended Tuesday’s USAC meeting, prompting the event to be moved to a larger venue of Kerckhoff Grand Salon. The focus of the meeting was a resolution supporting steps toward peace in the Israeli-Palestinian conflict. Public comments lasted for several hours.

On Tuesday night, more than 100 students crowded into the Kerckhoff Grand Salon. Many of them sat on the floor, while others stood in the back. For about two and a half hours, they took turns speaking and cheering one another on.

All it took to fill the room was an 800-word document authored by Undergraduate Students Association Council Internal Vice President Avi Oved. “A Resolution In Support of Positive Steps Towards an Israeli-Palestinian Peace” turned out to be much more controversial than its cheery name suggests.

But the marathon back-and-forth Oved’s resolution generated illustrates the limits of what a student government resolution can and can’t do. As evidenced by Tuesday’s late night debate, one thing a resolution can’t do is create a consensus where none exists.

Oved’s resolution, sponsored by two other councilmembers sought to promote “peaceful and respectful dialogue” about the Israel-Palestine conflict. On the face of it, the fact that more than 100 students attended the meeting – which had to be moved from its regular location to fit them – would indicate the resolution was a success.

But to call what happened at Tuesday’s meeting “dialogue” would be a misuse of the term. The meeting consisted of one group of people clapping and snapping for one set of statements, and another cheering for an entirely different set of ideas. If USAC is looking to host an amicable and educational conversation, that just isn’t the way to go about it.

Given the way the campus conversation about the Israel-Palestine conflict works – and has worked for some time – Oved’s decision to bring such a resolution to USAC was an irresponsible one.

Without consensus, an Israel-Palestine resolution acts only as a political hot potato, drawing the council’s attention away from issues where it can make progress.

That’s not to say a conversation about the Israel-Palestine conflict can’t or shouldn’t happen on campus. The conflict is one of the most drawn-out instances of political and social strife in the history of modern democracy, and it deserves the attention of future leaders and UCLA students.

Instead, the problem results from a lack of understanding among councilmembers of the role a USAC resolution can play in that conversation.

The structure of a USAC resolution implies a consensus: “Whereas we agree upon Statement A, therefore be it resolved that Statement B.” And in some cases, that structure works. A proposition that a majority of campus agrees upon is a good candidate for a resolution.

For example, in August, USAC passed a resolution condemning the use of the word “illegal” to refer to undocumented immigrants. The resolution garnered some media attention for a premise that most of this campus seems to accept: that a human being cannot be illegal, whether or not they have broken the law.

A more recent USAC resolution in support of the University of California Student Association’s “Invest in Graduations, not Incarcerations, Transform Education” campaign is more ambiguous.

Although students can surely get behind the idea of increasing funding for higher education, a clause in the resolution advocating a California constitutional amendment to legalize affirmative action is more likely to divide the campus.

But the conversation about the Israel-Palestine conflict has long been a immovable and bitter one. The problem is not hard to identify: the most relevant parties to an Israeli-Palestinian resolution – namely, the pro-Israel and pro-Palestine communities on campus – agree on very little.

The campus Palestinian community will only support a resolution that promotes a dialogue in which Palestinian students feel safe participating, said Dana Saifan the president of Students for Justice in Palestine and fourth-year psychology student.

The only way that can happen is if the University of California withdraws all investments from companies that do business with Israel, Saifan said. Otherwise, the oppression of the Palestinian people will remain the status quo, funded with tuition dollars from students on this campus, she added.

That call – termed “boycott, divestment and sanctions” or BDS – is a proposition that the Jewish and pro-Israel community at UCLA has rejected in the past.

Last year, for example, when then-External Vice President Lana Habib El-Farra brought forward a resolution that sought to divest from unethical companies and mentioned the Israel-Palestine conflict – without explicitly suggesting a link between the two – the Jewish community on campus reacted negatively. The head of Bruins for Israel at the time said he felt “almost marginalized.”

Resolutions signify consensus. As it stands, none exist. Until the situation changes on the ground in the Middle East, any talk of a USAC resolution addressing Israel-Palestine will be inherently circular.