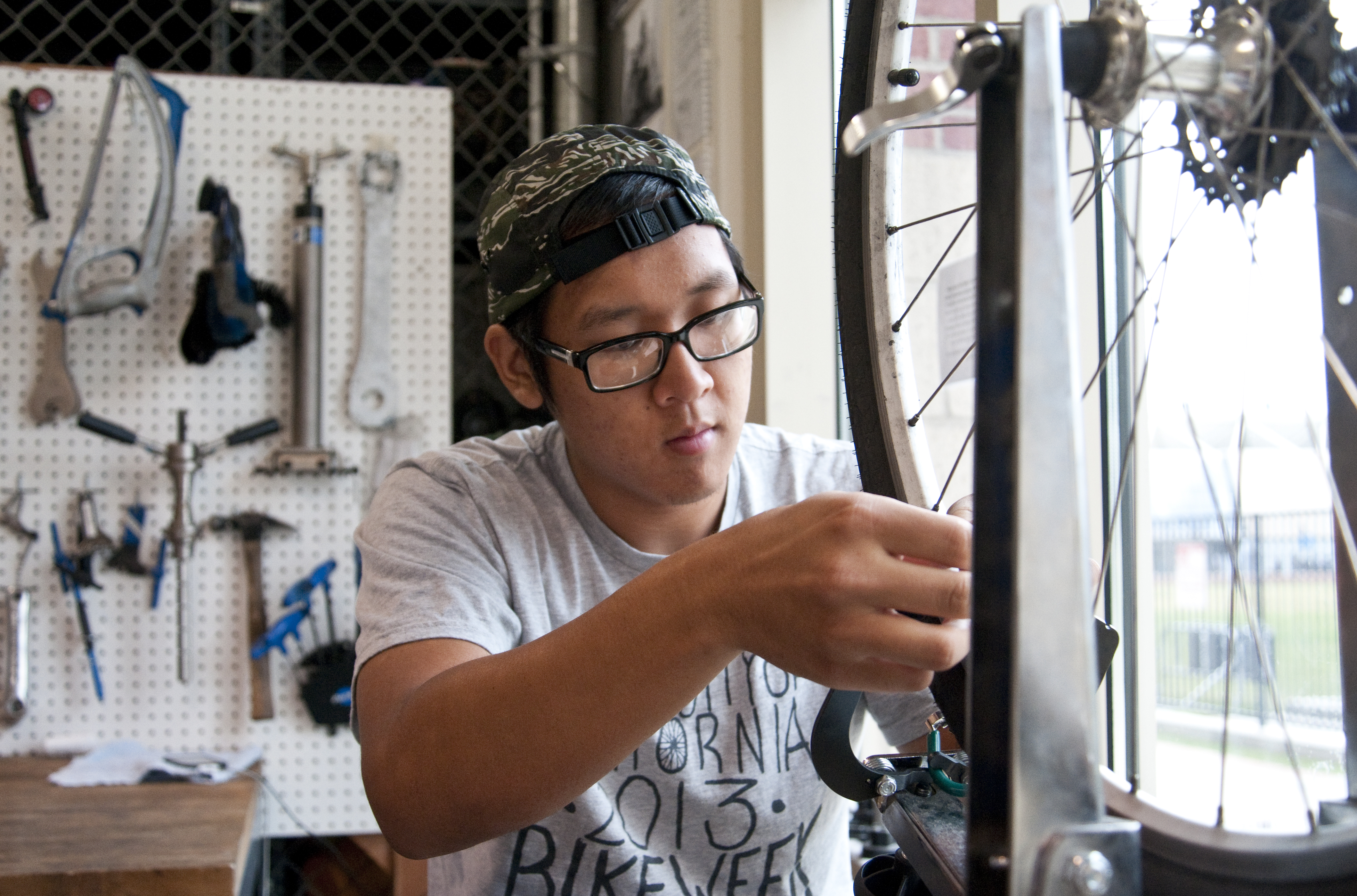 Vinnie Bui, a fourth-year anthropology student, is one of many students who work at the UCLA Bike Shop, doing repairs and fixing bikes.

Surrounded by wheel spokes and winding gears, Asher Toback spends his work hours fixing up students’ tattered bicycles in a small space tucked in the back of the John Wooden Center.

The fourth-year mathematics student and a studentsupervisor at the UCLA Bike Shop has seen firsthand the expanding bike culture at UCLA in recent years.

Six percent of UCLA students, including Toback, are riding their bicycles to campus, according to a report released by UCLA Transportation this week. The report was written to evaluate and illustrate how the department has worked to improve bicycling at the university since they adopted a plan in 2006 to encourage biking and improve infrastructure on campus.

The number of bicyclists at UCLA has tripled, from about 800 when the plan was adopted to about 2,400 last year, said David Karwaski, senior associate director of events and transportation at UCLA.

“We’ve made a lot of progress in the seven years since the plan was created,” Karwaski said. “It was time to pause briefly, count up the numbers and see what we’ve done and see what we need to tweak.”

Karwaski pointed to a bright green bike lane that opened on Strathmore Place last year as one way to cater to the cycling population.

Karwaski said he was encouraged because ridership levels in the lane have increased in the past year as students realize it can help them get to class.

“(The lane) is almost a flag to the entire campus community that biking at UCLA is recognized, and important enough that we’ll provide facilities for them,” Karwaski said.

UCLA Transportation recently painted another new bike lane on De Neve Drive on the Hill, posted safety signs around campus and installed “Inverted-U” bike racks, which are more secure than traditional racks and cannot be broken as easily.

Karwaski said the department learned that by making incremental improvements – for example, slowly increasing bicycle storage on campus – they can encourage the UCLA community to ride bikes.

The bike shop, which rents and maintains bikes for students, faculty and staff, has added staff and classes in the past years to accommodate a growing number of customers, according to the report.

Toback said the Bike Library, a collection of bicycles in the shop, has been rented out more quickly in recent months.

Toback said he was only a casual cyclist until he started tinkering with and maintaining his bike. Now he works in a room lined wall-to-wall with bicycles and teaches other students how to fix their own bikes.

Parth Thakkar, a fourth-year mathematics/economics student who created the Biking Club at UCLA Facebook page, said he bikes to campus every day, but has not noticed any big changes to biking infrastructure.

He said the only major improvement he has seen is the bicycle lane on Strathmore Drive, though he added drivers in cars sometimes drive too close to bikers in the lane.

“What we see in the report is that improvements aren’t always as shiny as the green bike lane,” Karwaski said. “Some of these things are a little quiet, but they’re still important.”

Thakkar said he hopes UCLA Transportation cuts down bushes near bike racks to stop thieves from using them for cover.

Bicycling culture expanded at UCLA in a more creative way at Ecochella, a concert at UCLA powered by bicycles that held its first event in May.

Rachel Woods-Robinson, a fifth-year physics student and the founder of Ecochella, said students ride bicycles to generate power for speakers at the event.

“It’s a great way for students to directly interact with renewable energy,” she said.

She said she was happy to see new bike racks near Ackerman Union, which have decreased crowding on existing racks.

“(Biking) is definitely a great way to get around campus,” Woods-Robinson said. “For me there’s no question whether or not to bike to school – you get exercise, and you get there faster.”

Karwaski said UCLA Transportation is working on improving bicycling at the university this year, starting with a pilot program for graduate students living in Weyburn Terrace to purchase subsidized bicycles next year.

He said UCLA Transportation will also install the first automated bike counter in Los Angeles on Strathmore Drive in the next month, which will count the number of bicyclists who ride on the road each day.

Toback said he thinks people like to bike at UCLA because the bicycling community is encouraging, and students sometimes ask their friends to join them.

“Los Angeles is a hard place to bike because the cars are really aggressive,” he said. “It’s kind of a badge of honor to say that you bike here.”