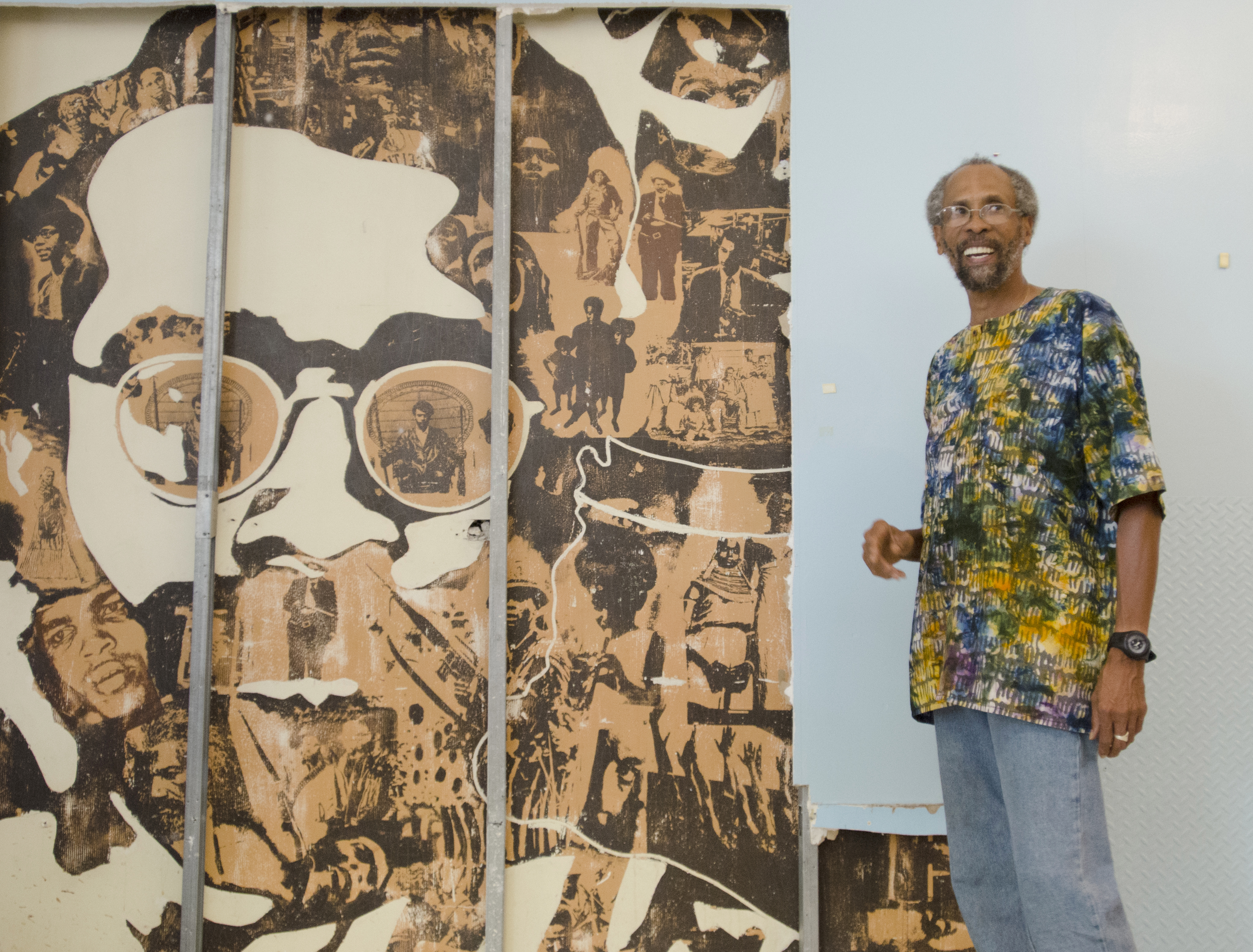 Neville Garrick, one of the mural’s artists, stands next to a painting of his own face in “The Black Experience” mural.

Piece by piece, workers slowly unveiled worn portraits and faded images of moments past but not forgotten, revealing a piece of UCLA history that has remained dormant behind drywall for more than 20 years.

Past and present UCLA community members gathered in Ackerman Union on Friday afternoon to begin the restoration of “The Black Experience” mural, which was painted by UCLA students more than 40 years ago, and later covered by a false wall during an Ackerman remodel.

Kamilah Moore, a fourth-year political science student and the chair of the Afrikan Student Union, said the mural’s restoration was long overdue.

“Forty years, it’s been way too long,” she said, standing in front of the mural at the ceremony. “By restoring the mural, we’re valuing people over profit.”

The image was first crafted in the midst of the Vietnam war protests, when seven black art students at UCLA decided to paint a mural of their faces, silk-screened with pictures of notable people and scenes from the black community.

Garrick said that he and the other artists chose people or scenes that were inspirational to them to incorporate into the art, such as his philosophy teacher who served as his mentor.

“She is (painted) on my chest,” he added, tapping his palm over his heart.

The campus shut down for the rest of that spring, Garrick said. People were covering the campus with graffiti to personally express their anger and frustration, he said.

But he and his fellow students wanted to express themselves culturally rather than personally, he said.

In 1992, the mural of the artists’ faces was hidden by a false wall during a remodeling of Ackerman. Several holes were drilled directly into the mural and Panda Express covered the right border of the art piece, said Roy Champawat, director of the UCLA Student Union.

Jason Smith, a former member of the Afrikan Student Union, began to push for restoration of the mural last year.

Smith said he read an article about the mural in the Daily Bruin in May 2010. But a course he took called “Beyond Mexican Mural: Beginning Muralism and Community Development” was what inspired him to take initiative to bring back the mural.

Smith, along with other members of the Afrikan Student Union, brought up a mural restoration proposal at the ASUCLA Board of Directors meeting in fall 2012.

“It’s great to have a piece of history in the union,” Champawat said. “All of the art on our walls is student art, and (the mural) may be the first piece of student art.”

Helen Singleton, another one of the artists and a Freedom Rider, said she contributed to the mural because she felt underrepresented when she was a student at UCLA.

“What we felt as black students (was) ‘This university doesn’t know who we are,'” she said during the ceremony.

The restoration of the mural will provide black students – and UCLA students overall – a greater sense of their history and will serve to represent them on campus, Singleton added.

Watching the wall coming down and a full portrait being revealed was powerful, Moore said.

“It feels like the experience of black students and (other) students of color, even all UCLA students, is being valued,” Moore said.